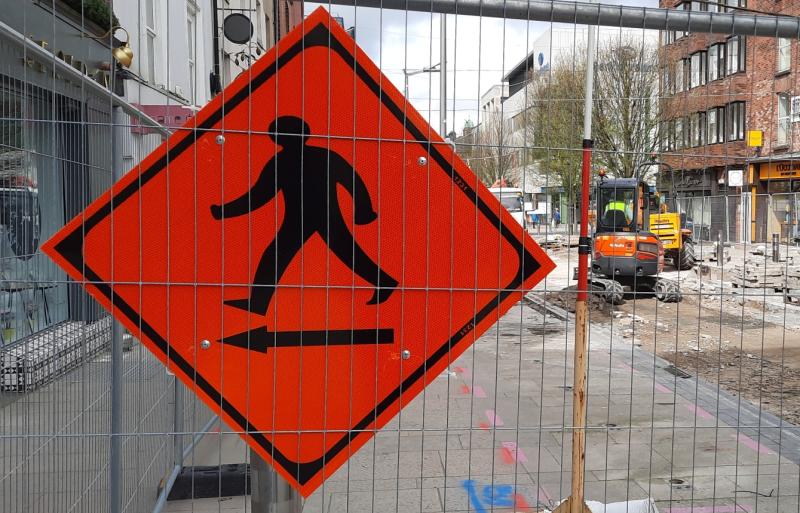 Work on the O'Connell Street revitalisation project is underway

LIMERICK City and County Council has moved to reassure members of the public that the city centre will remain open for business throughout the O'Connell Street revitalisation project.

Works on the multimillion euro project began this Monday morning - between William Street and Thomas Street -  and the overall project is expected to last around 14 months with a moratorium on works during December.

While there are some traffic restrictions, the local authority and the main contractor are emphasising that businesses will remain open and accessible to the public at all times.

"The project itself is phased and that is quite important in so far as the city centre will be open for business but there will be restrictions - traffic restrictions will be reduced to a single lane for part of the works but that is is very much required to ensure that the city stays open," said Seamus Hanrahan Acting Director of Capital Investment.

Barry Lane, project manager with contractor ShareRidge, says he and his colleagues will fully engage with all stakeholders and with businesses in particular.

"The shopkeepers' biggest concerns at the moment is when they do re-open that there is going to be a lot of business and a lot of people going into them and we are going to be making every effort to engage with them early on and we are going to work with them and ensure there is unobstructed access and we want to allay any fears that people have on that," he told the Limerick Leader.

As part of it engagement with stakeholders, weekly bulletins are being circulated in addition to monthly newsletters which will outline the progress and details of upcoming works.

"It really is a huge thing for us to keep people notified of the works coming up and to ensure that stakeholders know they can come to us if they have issues and we can resolve them as soon as we can - we are here to help and to get the job done as quickly as possible," added Barry Lane.

While there will be some traffic restrictions throughout the works, those who need to be in the city centre will be facilitated.

“​If people are coming in to go shopping (or to do business)  all the routes are still available and all the car parks are not going to be disrupted. At no stage will we be closing the two lanes of traffic,” explained Barry Lane.