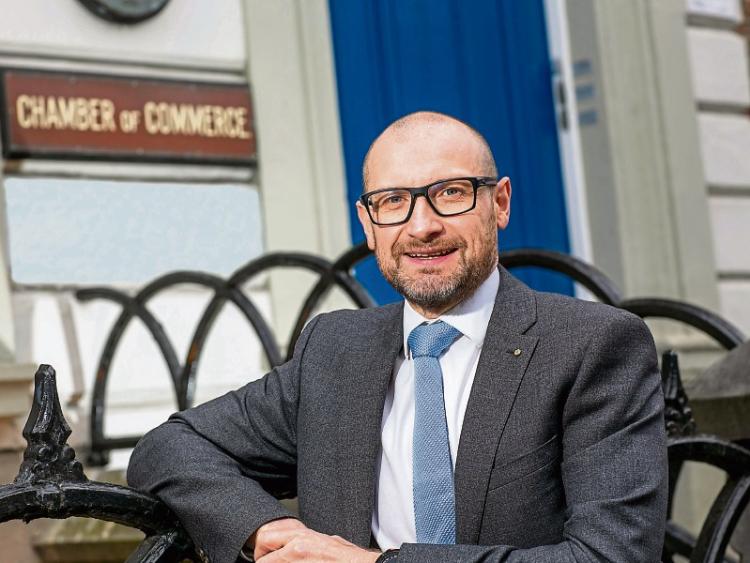 HIGH-PROFILE Limerick hotel manager Donnacha Hurley has been named the new president of the Limerick Chamber.

The boss of the Absolute Hotel takes over the role from Action Point’s David Jeffreys, and he said no business sector should be left behind in a post Covid-19 world.

Speaking after assuming the chain of office, Mr Hurley said: “There remain serious challenges ahead for many Limerick businesses and for some right now, particularly in the retail and hospitality sector, it might be hard to see positives.”

“​It is critical that the Chamber continues to advocate at a national level for the assistance required to support a Mid-West recovery and simultaneously continues to work with local stakeholders and the local authority for the speedy deployment of supports,” the businessman added.

He hailed the go-ahead for the €9.1m revitalisation plan for O’Connell Street as a “huge step in the right direction” for the city.

“We need to make Limerick city centre accessible, attractive and conducive to living and working in,” he added.

She said: “Donnacha is passionate about Limerick and the region, has huge energy, great ideas and shows leadership. It’s a crucial time for business so this expertise and experience is going to be essential. Just as having David Jeffreys, the chief executive of Action Point technology company was hugely beneficial for us as a Chamber when business almost overnight went online, it is equally fitting to have Donnacha, given his particular background in the hospitality industry, take on the presidency during a period when we are focusing on making our city centre more attractive for people to visit, live and work in.”

A native of Castletroy, Limerick, Mr Hurley has been general manager of the Absolute Hotel since 2008. A graduate of the world-famous Shannon College of Hotel Management, he also holds an executive MBA from the Kemmy Business School, University of Limerick and an M.Sc. in Hospitality Management at DIT.

Based in O’Connell Street, the Limerick Chamber is the biggest business representative organisation in the region.