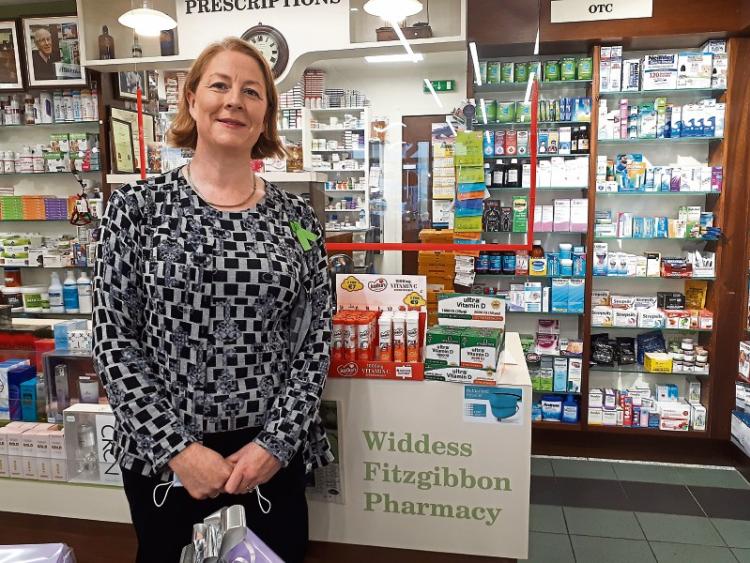 Tell us a little about Widdess Fitzgibbon Pharmacy.

My family has run the pharmacy since the 1950s. This was when my dad Jim Fitzgibbon and his brother Pat bought it from a Mr Austin. Prior to that, he had bought it from the famous MB Widdess who opened it in 1904. My dad worked into his 80s and passed away in 2008.

How have you tackled the Covid-19 pandemic in the business?

​I am so relieved that neither of my parents are around to experience this pandemic as I don’t know how I would have kept my dad indoors – anyone who knew him will appreciate that comment! At the start of the first lockdown we installed protective screens and systems to protect my staff and our patients. Now with the addition of masks it is becoming increasingly difficult to work in what is already a stressful situation. What we have found is that we are taking more phone calls, reassuring people and obviously we are doing a lot more deliveries in order to protect our patients and relieving them of that stress of wondering how they are going to get their medication. People will often say to me they are an “awful nuisance”. But I always say: “That’s what we are here for”. We are more accessible than the doctors and can sometimes take some of the pressure off an already overstretched system.

Where were you born and raised?​

I am a Limerick girl through-and-through! I was born in the Marian Nursing Home and I grew up at Sunville in the North circular Road. For the last 12 years, I’ve lived in Pallasgreen. I am a busy mother of three kids – two boys Michael, 17, Edward, 14 and one girl, Emily 12.

​My first degree is microbiology from Trinity College, which I completed between 1990 and 1994. I then studied pharmacy in Strathclyde University in Glasgow between 1994 and 1997. Following this, I then completed my pharmacy pre-registration training with Lloyd’s in Surrey, England. Although I returned to Ireland in 1999, I did not take over Widdess Fitzgibbon’s fully until 2018 after my mum Maureen passed away.

When I returned in 1999 there was my father and Mary in the dispensary. I learned so much from Mary, especially her ability to function under immense pressure. She worked in a pharmacy before there was computers when all labels were hand written. I cant imagine what that was like! Her knowledge and wisdom and her support was imperative after my dad passed away and they were big shoes to fill but we did! Thanks go in no small part to Mary and the other members of staff, including Margaret Casey -now retired - who was with us over 30 years, and Janet Larkin, who is over 20 years with the company.

To survive this pandemic and keep my staff and patients healthy and happy! Trading in the city is becoming increasingly difficult. If you take a look around the city centre even just along Roches street the number of empty units is becoming more obvious.

Everyone who's in business keeping the country going. What I've found is that there is a lot more anxiety around and we need to use our skill set to be both pharmacist and counselor. Sometimes all people need is someone to listen and say ‘yes it’s terrible’. But mostly to listen. We are supporting the green ribbon mental health awareness campaign. It’s okay not to be okay. I am a big fan of mindfulness and recommend it to my patients sometimes we just need to take a breath.