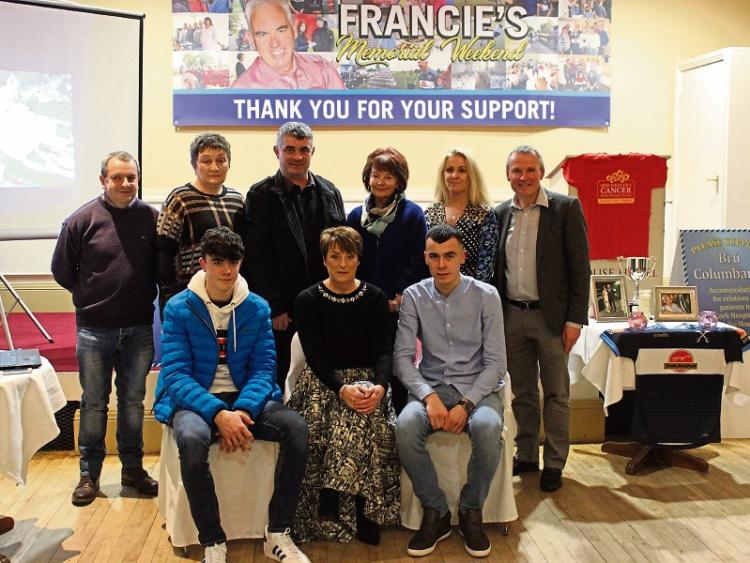 THE first anniversary of the death of Rathkeale business man, Francie Meade, sparked an extraordinary outpouring of community spirit and solidarity in his home town.

And it resulted in one of the single, biggest ever fund-raising drives in Rathkeale. A whopping €44,000 was raised over one weekend in late September and the money was shared between two charities last weekend.

Cheques of €22,000 each were presented to the Mid-West Cancer Foundation and to Brú Columbanus, the home-from-home for families of sick relatives at University Hospital Cork.

Francie Meade died on September 22, 2018, after a short illness which he bore with grace and courage. He was 54.

A year almost to the day after he was laid to rest, Francie was remembered with great fondness during the Francie Meade Memorial Weekend, which was organised by a small team of people including Francie’s wife, Geraldine and members of his family.

The weekend saw hundreds of men, women and children taking part in a soccer tournament, A Vintage Run and a  Mass Coffee Morning, raising a total of €44,000.

Francie is mourned by his wife Geraldine, sons Bryan and Andrew, sisters Mary, Catherine (Crowley), Ann (Falahee), brothers Bill, Paddy, Mikie, his uncle John O’Donnell, mother in law Marcella, nephews, nieces, in-laws, other relatives, neighbours, staff at the family-run business at the Five Cross Roads, Rathkeale  and a large circle of friends. He is buried in the new cemetery in Croagh.