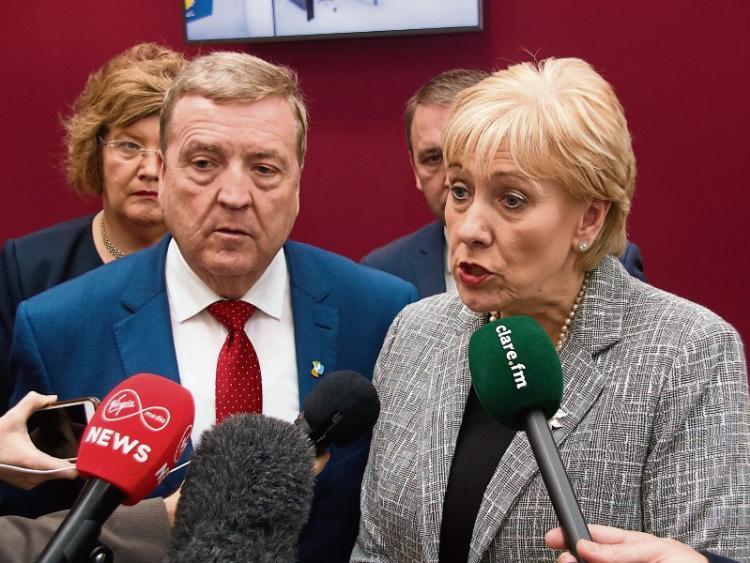 The Limerick Leader revealed plans for a new restaurant at the Crescent Shopping Centre, after a planning application was submitted to the council. It emerged later in the year that the eaterie is set to be Limerick's first branch of popular chicken shop Nando's.

Retail in the city centre suffered another blow after two shops closed in Cruises Street. Craft shop Art and Hobby and Korky's based at the adjoining chapel lane shut down, putting up to 10 jobs at risk. In February, we revealed that retail guru David Fitzsimons had been appointed to carry out a retail strategy to help the ailing street.

Another shop which ceased to trade in 2019 was Fine's Jewellers in O'Connell Street. It came after the promoters of Rugby World Experience reached a deal to take over the decades old jeweller, as opposed to build around it as was originally envisioned. Following a grant of planning permission, construction is well under way.

Up to 40 jobs were put at risk after Optel Vision announced plans to downsize its operation in Raheen. But in the same week, Three Ireland confirmed 30 new jobs at its call centre in Plassey.

Regeneron announced plans to pump another €200m into its operation in the Raheen Business Park. Niall O'Leary, manager of the vast Limerick plant, which lies on the former Dell factory site, revealed the firm is planning to expand by 240,000 square feet, or 50%. Another business expanding this month was the Savoy Hotel, which secured planning permission for its €8m revamp. This will see the city centre's only five-star hotel move into the neighbouring Mill building, upping its room capacity by 35 giving it a total of 129 rooms.

The shutters fell on British jewellery chain H Samuel in William Street. Five staff were impacted by the closure.

The University of Limerick president Dr Desmond Fitzgerald warned the bus service between the city centre and Castletroy could be a major impediment to the college setting up a campus in the city centre. Despite this, later in 2019, multi-million euro plans were unveiled to open a campus in the former Dunnes Stores premises at Sarsfield Street in what was one of the biggest news storis in Limerick in 2019.

The start of March heralded another big purchase, with Supermac’s supremo Pat McDonagh taking over the Castleoaks House Hotel in Castleconnell. He purchased the former Woodlands House on the banks of the Shannon for €3.5m, and plans to invest a further €1.5m in the scheme. Mr McDonagh had earlier in the decade acquired the Castletroy Park Hotel nearby. The businessman also bought the Castle Oaks Leisure Centre a short time later.

Limerick City and County Council formally announced its intention to seek approval to start work on the €180m Project Opera scheme this month. Detailed plans for the new scheme were published in our sister newspaper, The Leader, with the application going straight to An Bord Pleanala due to its strategic importance. The national appeals body held an oral hearing in November this year, with a decision set for January next. The mixed-use scheme will spread over almost 54,000 square metres and will see a landmark 14-storey office development at its heart, with a six-storey tower and a 57-room aparthotel. There are 13 new apartments planned, as well as a new city library, and public realm facilities. It's estimated the development could bring 3,000 positions.

An Bord Pleanala turned down plans to double the size of Castletroy Town Centre, formerly known as the Castletroy Shopping Centre. The appeals body refused the plans due to the threat they may have posed to city centre retail.

Planning permission was granted for a revolutionary multi-million euro floating data centre at Limerick's docklands. Some 100 construction positions and 24 permanent jobs looked set to be created after planners cleared the way for the scheme, which is being delivered by Californian firm Nautillus. There were a slew of objections against the plan from neighbouring businesses - but these were withdrawn on appeal to An Bord Pleanala.

US multi-national Johnson and Johnson announced plans for 100 new jobs as it expands its manufacturing facility at the National Technology Park. It means the firm, which manufactures contact lenses, will have 1,000 people on its books. Elsewhere in the same week, international financial services firm Fundrock also outlined plans to open in Plassey, in a move which will see 45 positions created.

The chief executive of the Shannon Group Matthew Thomas departed the high-profile role. The British businessman moved to the Ports of Jersey company. He was replaced by Mary Considine, who also served as chairman of the Shannon Chamber for the year.

There was another blow to the city centre's retail offering this month amid yet another closure in Cruises Street. The Outdoor Adventure Store creased trading, having only opened the year previously.

There was a temporary slowdown in operations at Analog Devices in Raheen over US president Donald Trump's blacklisting of Huawei. Work at the semi-conductor manufacturer's European plant in Limerick ceased for three days, with staff asked to take paid holidays. But there was better news for the business in November when it was named Limerick's Company of the Year at the annual Limerick Chamber Regional Business Awards.

Limerick was criticised this month in the twice yearly Ibal anti-litter league. The city fell 18 places and now sits 35th in the table of 40 towns, cities and suburbs across the state. It lost its title of being Clean to European Norms, with An Taisce inspectors deeming the area moderately littered.

The final pints were pulled at the landmark Windmill Pub in Henry Street, in a move which prompted sadness across the city.

However, as revealed by the Limerick Leader earlier this month, plans are in place to re-open the premises, albeit at half the size. The other half, developers hope, will become a daytime coffee shop. The closure came after new figures showed that a quarter of pubs in Limerick had shut since 2005.

In a huge development for the city, it was revealed that Marks and Spencer would move into Arthur's Quay, as part of a €60m transformation of the shopping centre. A number of other flagship stores were also cited as being in talks to open in the area. The deal will involve a land swap and a remodelling of the current Arthur's Quay structure. A new city square would be developed as part of the plans, as was previously envisaged in the Limerick 2030 blueprint.

Adare Manor got a  boost this month after it was announced the 2026 Ryder Cup would be held at the resort. The eyes of one-billion viewers across the world will be on the event, which will draw some of Europe and America's top golf professionals. Government is putting €50m towards the event, an amount which is being backed up with an unspecified amount by hotel owner JP McManus.

Limerick said goodbye to pioneering businessman Joe Brooks, who died following a short illness. Joe, from Patrickswell, was one of the first people to sell televisions locally in the 1960s.

Irish Cement got the go-ahead from the Environmental Protection Agency to proceed with its €10m plans to swap out fuel in favour of used tyres and solid recovered waste in the production of cement. The controversial proposals have been widely opposed by members of the local community, alongside politicians. However, the company insists the reforms are vital for the plant to remain competitive, and ensure the future of the more than 100 staff working on site.

IDA Ireland appointed a new business development manager for the Mid-West region. William Corcoran followed in the footsteps of Enda McLoughlin, who left the job creation agency last year. A Tipperary native, Mr Corcoran has held a number of positions in the United States, and is a New York-qualified attorney at law.

A €30m proposal to develop a 326-bed student complex opposite Punch's Cross was rejected by An Bord Pleanala for environmental and conservational reasons.

Finance Minister Paschal Donohoe's Budget for 2020 included a boost for Shannon Airport, with the base set to benefit from a route development fund. Elsewhere, Limerick could benefit from a share of a €130m pot set aside for urban regeneration projects. In a series of estimates devoid of surprises this year, other local announcements were thin on the ground. But Limerick Prison is set to share in a €265m investment.

Telecoms provider Enet announced it is to invest over €1m in a new facility in the National Technology Park. The firm, which employs 100 people, is moving to a new location in Plassey next year.

Multi-million euro plans to build a massive skyscraper on the banks of the Shannon were revitalised this month. The Limerick Leader exclusively revealed that Kirkland Investments, which had a 14-storey skyscraper green-lit in  2016, was scaling back its project down to seven-storeys.

It was a dark day for the local economy at the end of the month as component manufacturing firm Molex announced its closure, in a move which will see 500 people out of work. The company, based in the Shannon Free Zone, will wind down its operation by the end of 2020. Molex blamed insufficient financial returns for the products it manufactures locally. It was the biggest single job loss since Dell shed 1,900 workers over a decade ago. At least half the 500 staff in Molex commuted from Limerick.

After five hours of debate, Limerick councillors agreed the local budget for 2020, which has a projected spend of some €825m. Crucially for local businesses, the commercial rate - a multiplier charge paid by business owners based on the value of their property - was frozen, after last year marginally going up.

After Caherdavin store Ivan's closed for a second time in five years earlier this summer, a planning application is now in place for a healthcare centre, in a move which could lead to 20 new jobs.

Limerick FC is set to be liquidated following court proceedings in Ennis.

It came after it failed to come out of an examinership process, and ran out of time to source new investors. It means Ireland's third city no longer has a senior soccer club to call its own.

The Limerick Leader exclusively revealed proposals for a new town at the long-derelict Horizon Mall site on the Dublin Road.

The €60m development, if granted, will bring 245 residential units, a 152-bedroom hotel, two drive-thru restaurants, a creche, community facilities and a 2.8-acre park. It's hoped up to 600 people will live in the area, which has lain idle since 2008 when the economy collapsed.