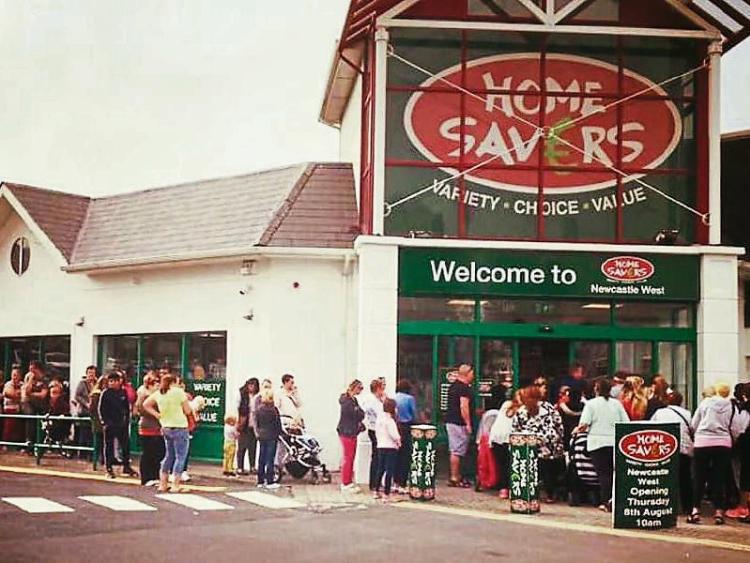 SHOPPING fever hit Newcastle West in earnest last Thursday when the new Homesavers shop opened its doors for the first day of business.

The shop is located in the former Garvey’s SuperValu Supermarket in the Market Yard which closed down in 2015.

On Thursday morning, with the much-anticipated opening just minutes away, long queues had already formed to get  past the glass doors where work had been ongoing for several weeks.

With shelves stacked high and then higher again, there was a lot for shoppers and the curious to see and buy and queues at the tills were long  until well into the evening.

The Newcastle West store is part of a €20m expansion planned by the Homesavers homeware company which is headed up by former Iceland Ireland chief executive Tom Keogh.

Last April, Mr Keogh was quoted as saying: "Our ambition is to be a nationwide brand. A rapid expansion plan saw us open 12 stores in the last eight months and a further 20 stores will open in 2019 at which point we will have a presence in 22 counties," he said  New stores include Wexford, Nenagh, Tallaght, Dundalk as well as Newcastle West and the proposed expansion would see its workforce treble to 1,200.

"Gone are the days when people will pay premium prices for everyday goods, they expect to be able to buy quality products for a reasonable price," Mr Keogh is quoted as saying in April. "The consumers' continued focus on value and choice is more prevalent than ever and this is what Homesavers strive to deliver on.”

The Newcastle West store is employing up to 30 people on a full and/or part-time basis.

The opening of Homesavers in the former supermarket has been welcomed as a very positive boost to the town, adding to the selection of shops already there.  An additional bonus point for many, is that the adjacent car-park, which has been closed for some time, has now also re-opened for the store’s customers.

The abrupt closure of the Garveys supermarket, in April 2015, with the loss of 45 jobs, was met with dismay in the area. The building was subsequently bought by the Dooleys, a long-established business familywho own and run a supermarket in nearby Bishop Street.

The family has leased the premises to Homesavers but has retained a section of the building as a bakery for their supermarket.