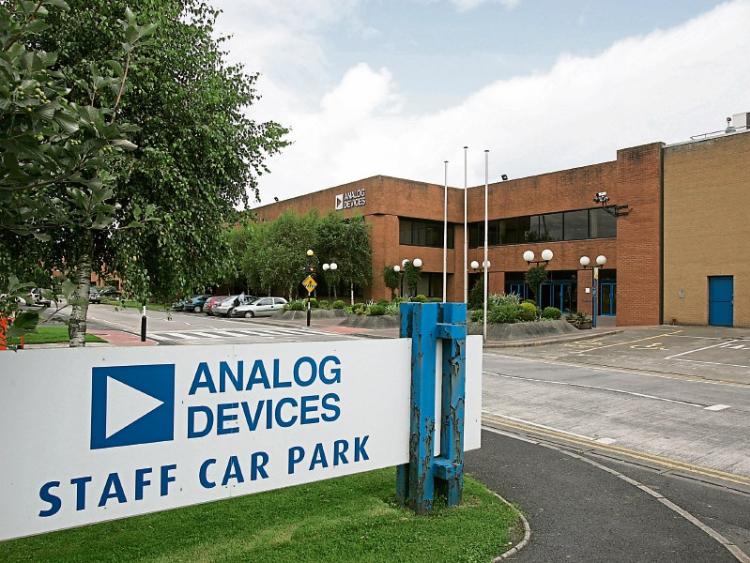 Workers at Analog Devices in Raheen are bracing themselves for a shutdown in production next month | PICTURE: LIAM BURKE/PRESS22

FEARS of a temporary slowdown at Analog Devices will be raised with An Taoiseach Leo Varadkar next week.

It comes with workers at the Raheen firm bracing themselves for a potential three-day shutdown early next month following Donald Trump’s blacklisting of Huawei.

Fianna Fail TD Willie O’Dea has described reports of a temporary ceasing of activity at the vast Raheen plant in the wake of Donald Trump’s blacklisting of Huawei as “very worrying” – and says he will address the Fine Gael leader in the Dail next Tuesday.

Headquartered in Massachusetts, Analog employs 1,200 at a vast complex on the edge of the city which serves as its main European base. It’s here they make chips for devices produced by Huawei.

Mr O’Dea said: “People have said we have to be nice to Donald Trump because of the huge American investment in this region. But this is an action that could directly threaten a huge amount of very well paying jobs. It’s something the government should be cognisant of.”

Mr Gavan added: “These are some of the best jobs in Limerick. They are unionised jobs, they are good jobs, and Analog is a good employer. The one thing that disappoints me is that our government have been far too quiet on this issue.”

Mr Trump has intervened to blacklist Huawei over allegations of spying.

The Sinn Fein senator has described this as “nonsense,” adding: “There is no evidence to support it. But what our government has not done is challenge this. And we should be doing.”

“Here we have hundreds of jobs at risk and what the Irish government hasn’t been doing is using its European channels to really call on America to back off this. It has serious consequences, and we can see them so close to home in Limerick,” he added.

The move is a huge worry to staff at Analog Devices’s Raheen plant.

One Analog worker there, who spoke on condition of anonymity, said: “The consensus is, people have been asked to take holidays, or unpaid leave if you don’t have holidays remaining. It could be anything from three to five working days. It’s to ensure we don't build up an inventory because of the uncertainty out there at the moment.”

The worker added that all staff “right across the board” are affected. Analog workers globally are impacted by this.

“It’s obviously quite unsettling,” they added.

Mr Trump – who was in Ireland last week – signed the executive order which effectively prevents any American companies doing business with the tech giant.

“It’s so volatile. One minute, he could say something and it could turn the world on its head – people could lock up their shops and the next minute he could open his mouth, and people could spend again. It’s so hard,” said the worker in reference to the American president.

Shares in Analog have been on the slide since the escalation of the trade tensions between the east and west.

Analog Devices Limerick is home to the firm’s European based research and development centre, and its global operations manufacturing facility.

While Huawei is not Analog’s only customer, it is a major client. The firm has around 12.5% pof revenue exposure to 5G smartphone technologies.

It’s not the first time the actions of President Trump have had ramifications locally.​

Last year, workers at Rusal Alumina in Aughinish faced a nervous period, due to hostilities between the American and Russian governments. Ultimately, the US treasury waived sanctions on the firm in January. Analog Devices did not respond to a request for comment this Wednesday.