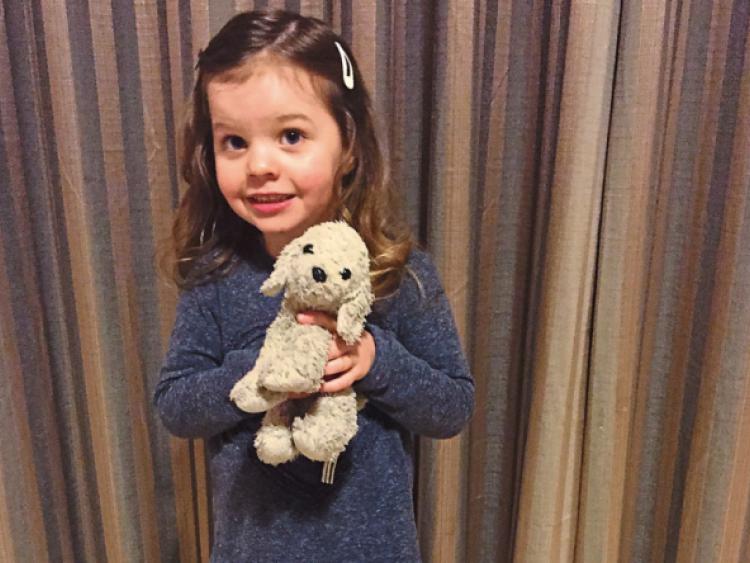 A TEDDY which was left home alone after being lost in Limerick over Christmas has been reunited with his owner.

A TEDDY which was left home alone after being lost in Limerick over Christmas has been reunited with his owner.

An appeal was issued on Christmas Eve by O’Mahony’s Booksellers to locate the owner of a ‘gorgeous’ teddy bear which was left in the city bookstore on December 23.

And in what was a fairytale ending, three-year-old Niamh Maher from Bohermore, Ballysimon was reunited with Pluto on Saturday after her mum Linda read a story about the lost toy on the Leader’s Facebook account.

“On December 23 we had gone ice skating and then for something to eat at Marco Polo. We went into O’Mahony’s to get a couple of presents,”Linda recalled of the day Pluto went missing.

“We went home and we just couldn’t find Pluto in the house. With the Christmas panic and all the new toys we just thought that it would show up somewhere.”

Pluto had been given to Linda by her mum Carmel as a baby shower gift when she was pregnant with Niamh.

“Niamh grew to love it and it went everywhere with us. In every photo Pluto is in it and if you ask the names of who is in the family, Pluto is always mentioned.”

Niamh, who will celebrate her fourth birthday later this month, would snuggle up to Pluto each night. The little girl couldn’t understand where he had gone to.

The teddy bear spent 10 nights over the Christmas period all alone perched beside a stack of books at the customer service desk in the city store. An appeal was sent out on the store’s Twitter account on Christmas Eve in an attempt to locate its owner, which was the subject of a story published by the Leader last week.

“I was on Facebook and I saw the Limerick Leader story and I went, ‘Oh my God, it’s Pluto’,” said Linda. “My husband was grabbing the phone off my hand to see it. I couldn’t believe it because I didn’t realise that it was out of the house.”

Linda posted a message on the Leader site explaining that the teddy was her daughter’s and went into the city bookstore on Saturday when Niamh and Pluto were reunited.

“It was very good that O’Mahony’s went to the trouble to try and find the owner. We are very grateful because we would have never found him otherwise.”