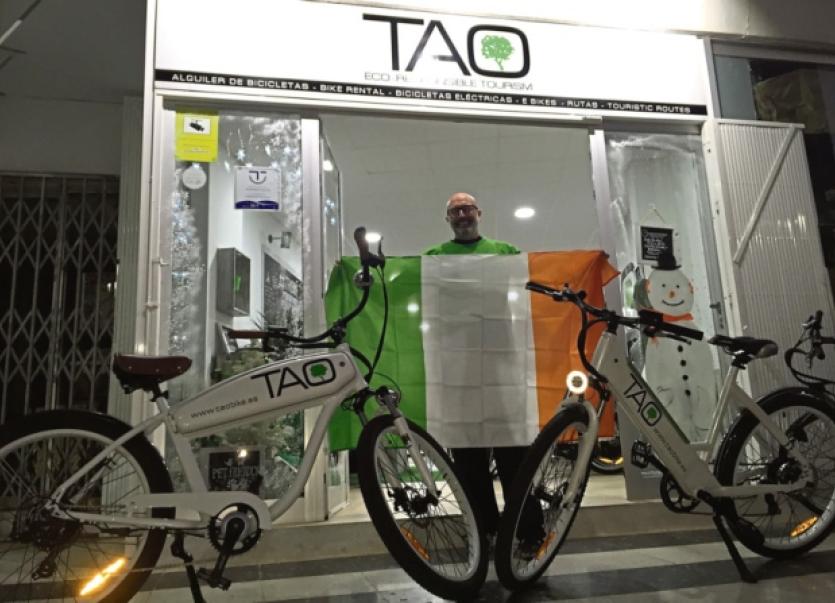 AS the rain in Spain falls mainly on the plain – and not everywhere like in Ireland – a Limerick bicycle company has opened a shop in Benidorm.

Goeco, based in Cappamore, are bringing their famous electric high nelly bikes to the continent. Paul Mannering, son of company founder Marty, said they needed to start spreading their wings into Europe after their success on the Dragons Den TV show.

“We decided to beat the Irish storms and winter blues by opening the first Irish electric bike facility in Spain. What better place than in the sun with customers who want to see the sites and our eco tourism model does exactly that,” said Paul.

They are even offering Irish customers a big discount if they wear an Ireland or Limerick jersey on a bike ride.

All the bikes for sale and hire in Benidorm are built in Cappamore.

“We have tried a few bike hire initiatives here but the weather and bike culture is still against us so a warmer more bike orientated country was a natural choice,” said Marty.

Benidorm was their chosen destination after they were contacted by Sergio Ruiz, a Spanish electric bike enthusiast.

“He was interested in our Irish Rover bike that we build here in Cappamore, the model we won Dragons Den with. We got a little help from him and very quickly looked at a few of his suggestions. We chose Benidorm because of the massive all-year round tourism from English, Irish and Scottish holidaymakers – all nationalities we deal with every day as electric bike experts. But surprisingly Spain didn’t really get the electric bike idea so we saw that gap and jumped quick,” said Marty.