Four thriving Limerick quads are best present of all 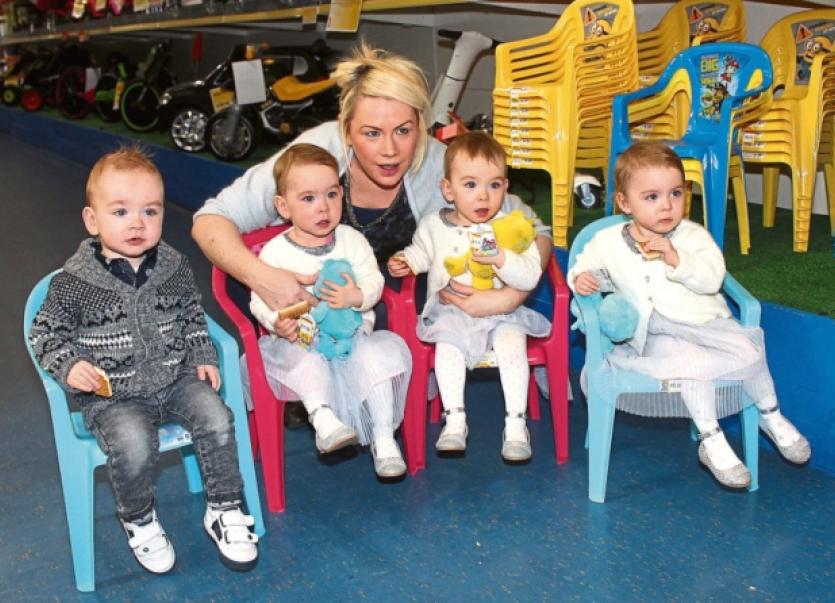 A YEAR and a half ago Lucas, Lily, Mollie and Amelia Slattery entered the world weighing between 2.15lbs and 4.3lbs – now they are all hovering around two stone, are walking and can even say Santa.

A YEAR and a half ago Lucas, Lily, Mollie and Amelia Slattery entered the world weighing between 2.15lbs and 4.3lbs – now they are all hovering around two stone, are walking and can even say Santa.

The Slattery quads, from Caherconlish, have to be Santa’s four cutest little helpers!

They are pictured in Smyths Toys store in Childers Road Retail Park this Wednesday where mum and dad, Grace and James, were presented with four generous vouchers to spend on their pride and joy – and God knows they deserve them. Every week around 170 nappies have to be changed and the four go through 30 litres of milk but all the sleepless nights are more than worth it.

“They are all normal baby weights, started walking at a year and two months and are saying the usual - ‘mama’, ‘dada’, ‘bobba’ and recently they’ve started calling each other by their names. Amelia would call Molly ‘Nolly’ and Lucas is ‘Lulu’. They absolutely adore older brother Josh who is ‘Dosh’.

“I think because they’re all together, it really helps with their social skills. The minute one of them does one thing, they all want to do it. They really try to imitate and copy each other. When one says something and gets praise for it, everyone else says it or does it,” said Grace.

The word of the week is Santa.

“They say ‘Danta’. I have stuff around the house and we’ve been teaching them so they’re taking it in. Lily is just a bit scared of him. We have been kindly invited to the Santa Experience in the Jetland this Friday so we are getting them prepared so they’re not screaming the place down!” smiled Grace.

The tots caused quite a stir in Smyths with everyone wanting to take them home – but only James and Grace know what it is really like.

“This year has been far tougher than last year. Since they turned one it’s just been so much tougher than when they were new-borns. The daily routine is so much harder because they’re running and climbing.”

And sleeping through the night was a nightmare.

“They weren’t sleeping at all, really bad, we were up with them about 12 to 13 times a night – the two of us were just exhausted. This was going on for months, maybe six to eight months, so we went about getting a sleep expert to help.

“This was only the other week that we did this. We spoke to Edel Gargan, of Baby Sleep Academy, and put plans in motion. We told her all of the problems we were having, their daily routines and she put a plan together and emailed it to me. Since the Friday night before last they are sleeping 12 to 13 hours a night. In the last week we don’t know ourselves!” said Grace.

“The main thing is to take the bottles off them. When they woke at night-time, they say babies wake seven to nine times a night, they were looking for the bottle to help them go back to sleep. We have retrained them now with her help to get them to know how to go back to sleep themselves. So now we literally put them into bed at 7.30pm and we literally don’t go back into the room until 7.30am, unless of course they are teething or sick or there’s a problem,” adds Grace, who thanked Smyths for the vouchers.

“We are overwhelmed by it, we are thrilled.”

Trevor Dolan, store manager of Smyths Toys, said they were delighted to do it.

“We have been following their story since they were born and have been mesmerised by it. It was an absolute pleasure to have them in the store this morning and a great experience to have four siblings at one time. There was a lot of people looking to see what was going on. We look forward to seeing them in the future,” said Mr Dolan.

The Slatterys are looking forward to a quiet Christmas, spending time with family and friends and hopefully a peaceful one.