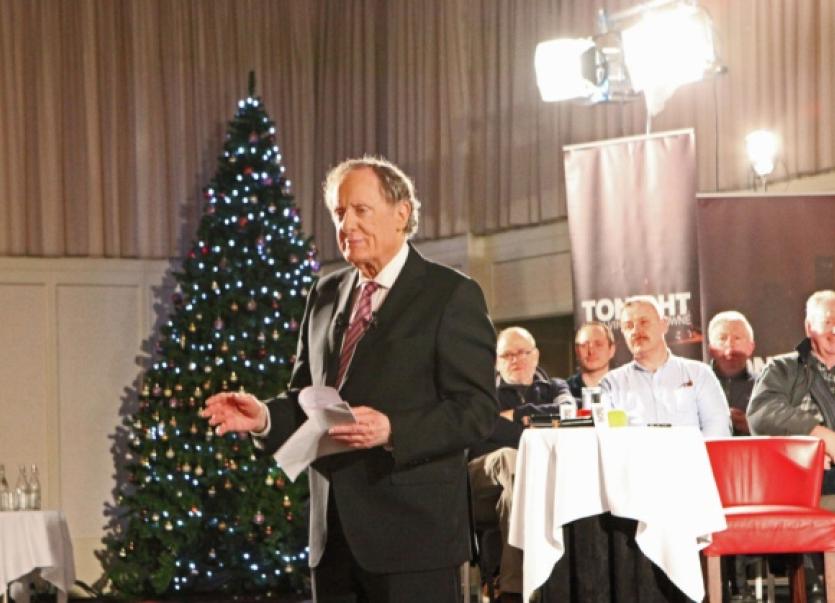 ALMOST 400 people packed into the Strand Hotel this week as Vincent Browne’s People’s Debate rolled into the city.

ALMOST 400 people packed into the Strand Hotel this week as Vincent Browne’s People’s Debate rolled into the city.

“We get worried we will not fill the halls when we have our debates in Dublin, but we have the opposite problem here,” a TV3 researcher told the Leader ahead of the show. Indeed, it was a case of standing room only as filming commenced.

Finance Minister Michael Noonan was in Brussels, while Education Minister Jan O’Sullivan had cabinet meetings in Dublin. Deputy Kieran O’Donnell was absent for family reasons. Few Fine Gael supporters put in an appearance – likewise Labour fans – perhaps conscious that Government parties have taken a pounding at debates in other constituencies.

No doubt the politicians who did turn up saw the televised debate as an ideal opportunity to land some blows ahead of the general election, widely expected in February.

But with the absence of two of Limerick’s political heavyweights, opportunities for points scoring were limited.

Vincent pointed out – to boos from the audience – that Mr Noonan and Ms O’Sullivan were offered many different dates and times to attend.“But one person who will not keep away from any debate – and a dogfight – is Willie O’Dea,” he said.

The former Defence Minister appeared isolated on a high stool separate to the other election hopefuls who sat on the stage.

Abide by the rules, the veteran presenter said sternly at the outset, warning audience members: “If you go on and on and on, we will just edit it out.”

Before the cameras rolled, Vincent asked the audience what they would like to discuss, a question which drew a whole range, from water charges to healthcare, to the abolition of the Eighth Amendment, and the “failed Regeneration process”.

Showing his wit when someone suggested the stalled Limerick to Cork motorway be included, the Broadford man said: “Now why would anyone in Limerick want to go to Cork?”

The health service in the region was also debated, with Cllr Prendiville leading calls to abolish the centralisation model, saying: “The Regional [hospital] simply cannot cope.”

He had other criticisms – plenty of them, of both the government and Fianna Fail. So many that Willie, by now in full streetfighter mode, retorted: “I would love to be in the happy position Mr Prendiville is in, where he is against everything and for nothing”.

Rose Moloney, a Fianna Fail activist, said she was “appalled and shocked” at conditions in Dooradoyle. “I had to squeeze my way past trolleys which were lining the corridors when I was in there. How much more of this indignity must there be?” she asked.

This led to a debate on mental health provision in Ireland, with Limerick having one of the highest rates of suicide in the country.

There were passionate contributions from the Corbett Suicide Prevention Patrol, which has stepped up its interventions along the riverbank.

One young woman who bravely spoke out was Leona O’Callaghan, who had spent time in the University Hospital Limerick’s ‘5B’ ward. Addressing the politicians, she said: “I think you should sit in these wards and take a look at what is going on there. It is torture. Very vulnerable people, suicidal people, are being put in with people who are very violent.”

On stage, Cllr Quinlivan was seated just a few metres away from Mr O’Dea. Repeated mischievous attempts by the combative host to stoke the animosity between the pair only paid off in the closing stages, when they traded barbs.

After the presenter picked Mr O’Dea up on not remembering a particular incident, Cllr Quinlivan retorted: “That would be similar to when he could not remember the name of the gardai who allegedly gave the information to about me” – a reference to the incident which saw the Fianna Fail TD forced to step down from Cabinet in 2010.

All the election hopefuls were asked their views on the Eighth Amendment and the consitution ban on abortion under any circumstances. Renua’s candidate, Desmond Hayes, said: “It is a decision of the conscience, and I do not think it is an issue for me to comment on”. Naturally, Vincent seized on this, asking him five times whether he was in favour of a referendum.

When his efforts eventually yielded a response – “I suppose so” – an exasperated Vincent then asked Mr Hayes whether he would vote to repeal to the amendment. Finally, he answered in the negative.

After filming had ended in the debate – which aired on Wednesday night on TV3 - Mr Hayes said he was disappointed more focus was not placed on jobs. Corbally woman Trudy Meaney, who was robbed last year, was disappointed that crime in the city had not been debated but most of those the Leader spoke to afterwards said they were going home happy with the debate.