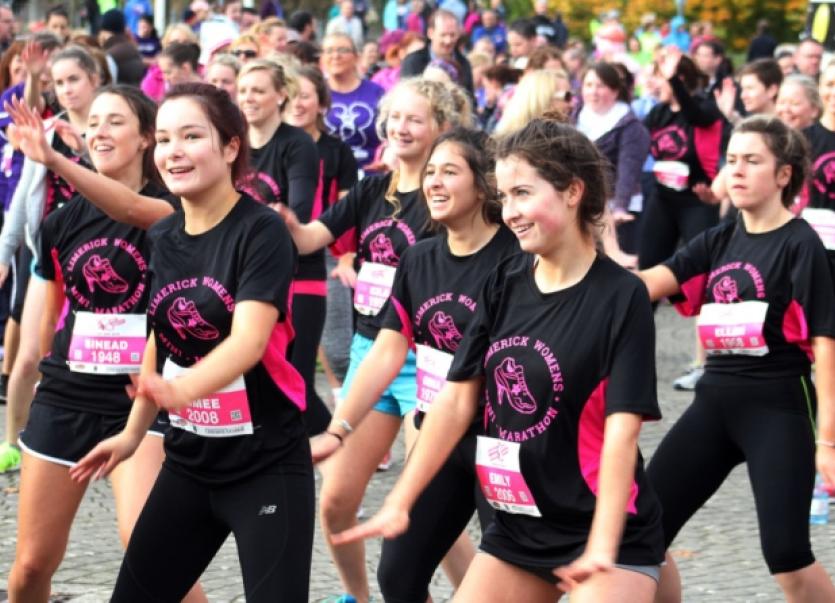 MORE than 2,200 people from the city and beyond descended upon the University of Limerick grounds to take part in the 18th annual Limerick Women’s Mini Marathon on Sunday.

MORE than 2,200 people from the city and beyond descended upon the University of Limerick grounds to take part in the 18th annual Limerick Women’s Mini Marathon on Sunday.

Amongst the vast numbers of participants who ran and walked the 5km and 10km track, were more than 50 groups of locals raising money and awareness for various charities across the Mid-West region.

Though the bank holiday weather was mixed, the participants were able to enjoy a dry, hour-long run and walk with the sun beaming onto the Plassey campus.

Minister for Education and Skills Jan O’Sullivan also attended the event, despite landing on Irish soil in the early hours of the morning after a trip to China.

“I have been doing this most years since it started,” Minister O’Sullivan said, moments before her take-off.

“I’m with my friend Louise. We hate missing it. I wouldn’t be one of the fast ones - I would be walking rather than running. It’s a great event. It allows a huge number of people to raise money for charity, and it’s a very great event for Limerick as well. It’s just fantastic to see so many women together, doing something that’s good for us and that we enjoy it at the same time.”

Hundreds gathered outside the UL Sports Arena to warm-up with anaerobic exercises choreographed by a motivating Darren Nash.

More than 10 people represented the Jason’s Journey cause. Spokesperson Lynn Shanahan, Ballyneety, said that the funds are “desperately needed by the family to pay all their legal costs to get justice for Jason [Corbett].”

Dozens arrived for the Regional Hospital [UHL] Paediatric Oncology charity fundraiser, which was set up in memory of 11-year-old Becky McCauley, who lost her battle with cancer in 2012.

Her mother Mary said that they have so far raised more than €25,000 for parents who need financial assistance for their children who are undergoing oncology treatment.

Crossing the finish line for Limerick was Ballyclough’s Orla Drumm, taking home the silver, and was less than a minute behind Rio 2016 athlete Michelle Finn.

Ms Drumm, 31, said that it was a tough race but it was “promising” to be closely trailing behind the prospective Olympic runner.

“I tried to pick up the pace because I know Orla has a good kick if she did come up behind me, so I had to keep the gap as much as I could.”

Event organiser John Cleary said that the event was a “huge success” and that the funds raised will help Limerick Athletics Club over the next year.

It’s an event that’s almost 20 years in Limerick, and it’s now part of Limerick culture at this stage. And you can see that with different generations coming out to us. It’s great for Limerick.”

Pick up this weekend’s Limerick Leader for more coverage on the Mini Marathon.