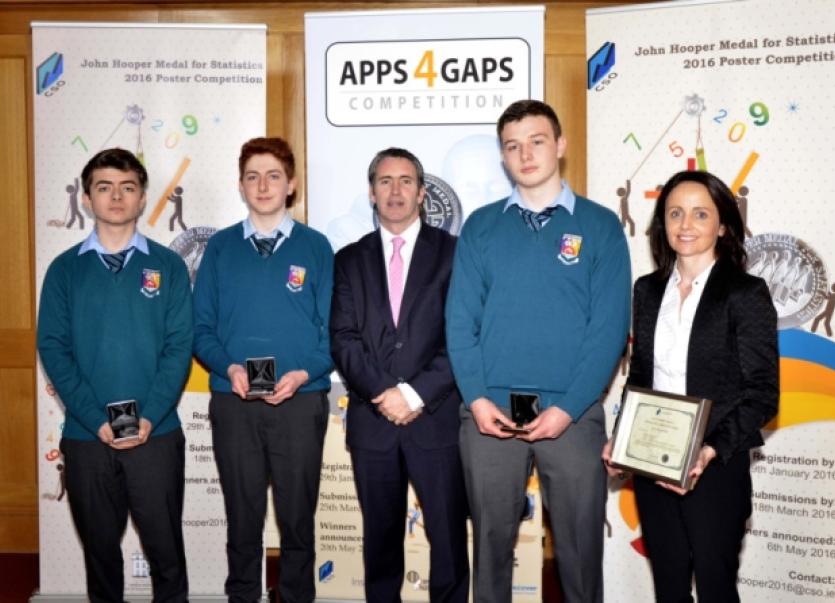 At the Department of Education in Dublin last Thursday, Jack English, Harry Knapp and Robert Quille were each presented with the Alice Perry Medal, named in honour of the first woman in Ireland or the UK to graduate with a degree in engineering. As winners of the Best Working App, following entries from schools throughout the 32 counties, they also received €1,500.

The presentation was made by Minister Damien English, who praised the Castletroy boys as “leaders of the future”. Their app, Infinite Path, can be accessed online and utilises information from the Central Statistics Office, organisers of the competition.

Jack English told the audience in the Clock Tower building that decision to enter Apps4gaps was inspired by his visit to Silicon Valley last year, which was the result of winning a Young Innovators competition under the Irish Technology Leadership Group forum in Limerick.

“I’ve always a had an interest in computers and in California I got the chance to meet the Collison brothers. They talked to us about programming and how they got started in it. They attended our school a few years ago and now run a multi-billion dollar corporation, Stripe. So I thought that looked alright and I started picking up a few books and learning. When I came across this competition I knew I wanted to get involved.”

Robert Quille’s design skills ensured that the app looked clutter-free and easy to use. Robert told the audience that he had been “heavily inspired by Apple” in his design choices.

Harry Knapp, another budding computer scientist, was on hand to ensure that the user experience was as good as possible. “Small things turn a good project into a great project, which is what we aimed for,” he said.

The judging panel clearly agreed and the boys praised their teacher, Lisa Kiely, for encouraging them all the way.