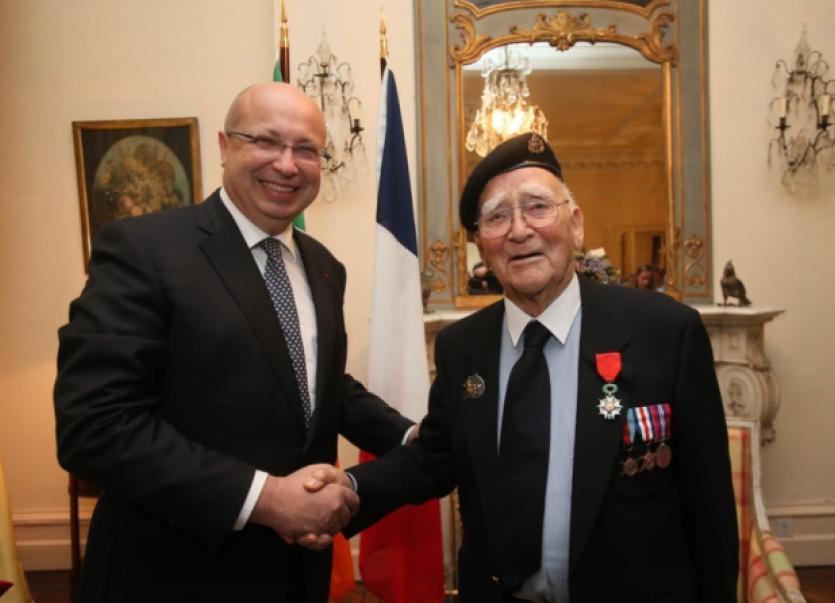 A LIMERICK-born veteran of World War Two - whose leg was amputated in 1945 - has received the Légion d’Honneur – the highest decoration in France for military service.

A LIMERICK-born veteran of World War Two - whose leg was amputated in 1945 - has received the Légion d’Honneur – the highest decoration in France for military service.

Henry John Alfred Place, 91, a father of two and grandfather of six who lives in Parteen, received the prestigious award at the French Embassy in Dublin, where he paid tribute to those who did not make it home from the Front and also wished to acknowledge those killed in the Paris terrorist attacks.

“I want to acknowledge all the soldiers who fought for the freedom of France and Europe in World War II, in particular, my armoured car commander, Lt Edwin Crewe, who unfortunately didn’t make it home,” he said.

“I offer my condolences to the people of France, especially those who lost relatives and friends, following the recent terror attacks in Paris.”.

Henry, who will celebrate his 92nd birthday in six weeks, received the honour from the French ambassador to Ireland, Jean-Pierre Thebault, who said that “by decorating Henry Place, France wants to thank all the Irish who took part in the liberation of France in 1944.”

Born on January 12, 1924 in Limerick, Henry was studying engineering at Trinity College Dublin when the war broke out.

In May 1942, aged 18, he enlisted in the Royal Armoured Corps and he landed in Normandy in July 1944 with the 53rd Reconnaissance Regiment.

On August 14, 1944, while on advance patrol in the south of Caen, his armoured car was hit by enemy fire, and he and his troop commander, Lieutenant Edwin Crewe, were thrown from the vehicle and spent all that day badly injured in the field.

Edwin Crewe died from his injuries before they were picked up later that evening.

Henry’s leg was amputated when he was sent back to hospital in Britain, and was discharged from the army in December 1945.

After the war, Henry worked for a while in London before moving back to Limerick, where he worked in Cement Roadstone before retiring in the early 1980s. His wife Maria passed away in 2009.

Henry travelled to France to attend the 60th anniversary of the Battle of Normandy commemoration ceremonies in 2004 in the Orne department of Normandy, when he visited the graves of his Troop Commander and other fallen comrades from his regiment at Banneville-La-Campagne war cemetery for the first time.

He again travelled to France in 2014 when he attended 70th anniversary commemoration ceremonies in Bayeux and Ouistreham.

It has been a busy few months for the 91-year-old.

In October his son Hugh Place graduated with a Masters degree in Risk Management from University College Dublin; a week later Henry’s youngest grandchild Elodie, Hugh’s daughter, was christened, and two weeks ago Henry’s daughter Delphine graduated with a degree in Culinary Arts from Limerick Institute of Technology where she also received an award for highest marks in her class.