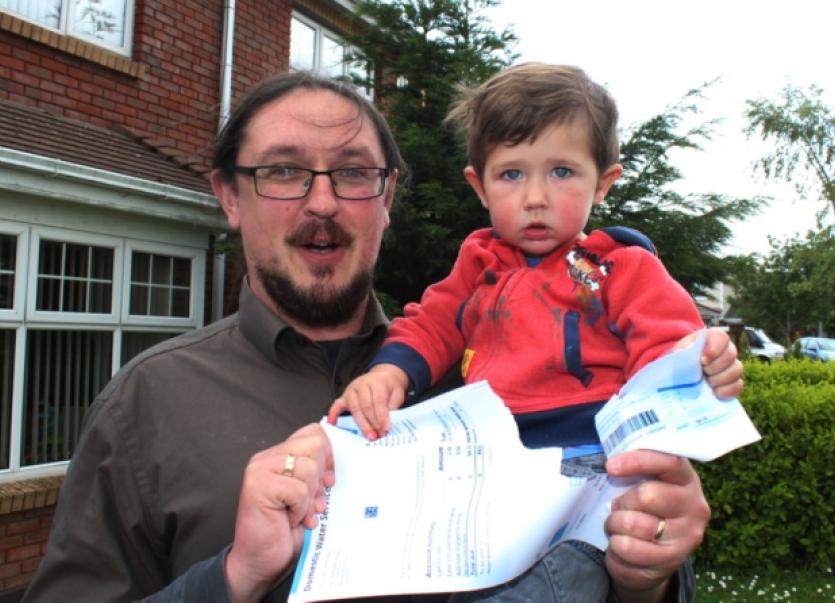 THE first water charges bills have started landing on people’s doormats in homes across Limerick city.

THE first water charges bills have started landing on people’s doormats in homes across Limerick city.

Householders are being asked for money from Irish Water for the first time since the company was set up, with a charge of up to €65 per quarter for those who have not had meters put in yet.

It has led to renewed calls to boycott the charges, which have brought hundreds of thousands of people to the streets in national protest.

One of those who will be doing that is Dooradoyle father-of-one Mike Funnell.

A regular demonstrator against charges, Mike says he is refusing to pay, for his two-year-old boy Cillian’s sake.

“I am damned if I am going to allow young Cillian to have big bills. I don’t want to be around in 20 years when he asks me why we did not fight this when it was started,” he said.

Mike - who has another baby boy on the way with his wife Doireann - said he can understand the need for charges to act as a deterrent against people wasting water.

But, he added: “Irish Water is not about conservation. It is about paying off the troika. It is just a quango, for people who have not been doing their jobs in councils. I don’t think I would mind being charged if it was guaranteed it was for conservation, and it was for the people.”

But, he has said he will not be paying the €64 quarterly charge, and illustrated this by ripping up the bill.

“I disagree wholeheartedly with everything that Irish Water has been set up for, everything it has done, and the amount of money they have wasted. It is a disgrace the taxpayer has forked out €50m for consultants,” he told the Limerick Leader.

With thousands of bills set to arrive at homes across the city in the next fortnight, Anti-Austerity Alliance councillor Cian Prendiville urged people to “hold firm” and refuse to pay the charges.

“People should boycott these bills. If they pay them now, they will find they have charges of €800-plus to what is essentially a privatised water company in reality. But people can safely boycott at the very least until the general election, because there are no penalties.”

The billing process started in early April, and was introduced on a phased basis across the country.

Unmetered charges range between €40 and €65 per quarter.