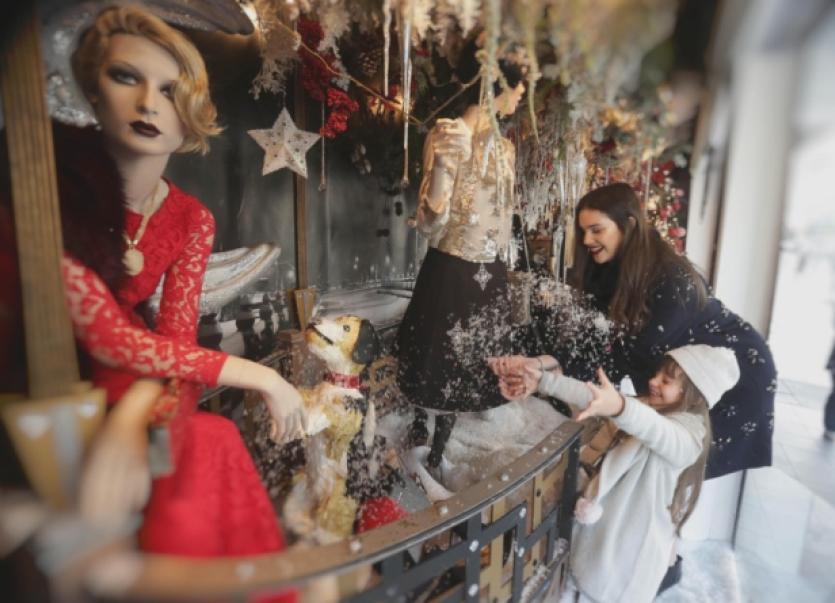 LIMERICK retailers are optimistic of a successful Christmas trading after signs of recovery in the city centre.

LIMERICK retailers are optimistic of a successful Christmas trading after signs of recovery in the city centre.

They are also bullish about increasing numbers of visitors to the city centre after a raft of new brands moved into the urban area, and the council introduced a special parking initiative where spaces are free from 3pm daily.

Jeweller Matthew Ryan of Matthew Stephens is hoping for a record festive season, while Brown Thomas boss Liam Dwan said his staff are putting their “best foot forward” for what they hope will be a bright Christmas.

Michael Gleeson, of Gleeson’s Shoes, says this Christmas is the first time he has been optimistic in five years.

“I can see there is a better spend, and people are more enthusiastic about doing their shopping. People are more confident,” said the Dromkeen man, who has traded in William Street for 50 years. Brown Thomas unveiled its Christmas window last week, and Mr Dwan said they went the extra mile this year to create their ‘Christmas wonderland’, incorporating animation in the window for the first time in many years , and doubling the amount of garlands previously used.

He said: “With it being the City of Culture, we made a bigger effort this year to show off the store in its very best light. As we are right in the centre of the city we felt it important to put our best foot forward.

Mr Dwan said trade has increased: “Every day, I come in from Tipperary, and there is certainly more traffic on the roads into the city. Everyone in the city is making a big effort. We have also had to up our games, as customers are more discerning, and want the best service possible when they are parting with their hard-earned cash”. Mr Ryan concurred, saying: “Shoppers are back spending, and most importantly spending it in and supporting our great city. There has been great work done by the City Council and lots of individual stores and businesses to add to the festive buzz in the city through investment in Christmas decorations and light displays”.

He revealed higher-end gift purchases are again being made, and “customers are no longer afraid to spend again.

“There is a better buzz and atmosphere, people have smiles back on their faces, restaurant and coffee shops are buzzing. I think the people of Limerick have realised they must support city businesses: together we can make a difference,” said Mr Ryan. “Nothing beats the shopping experience of walking the city’s footpaths at Christmas - the chill in the air, the choral singers, the buzz, the dark foggy evenings and the lights, all topped off with the excitement of Santa”.

Mr Gleeson welcomed the parking initiative, but urged the introduction of a park and ride scheme to bring more people in from the county.

He said: “Perhaps our country relations in the council would facilitate us with the various parking areas, particularly out around the Dublin Road, the Ennis Road, the Corbally Road and Raheen.”