Fergal Keane: Early days at the Leader made me the journalist I am 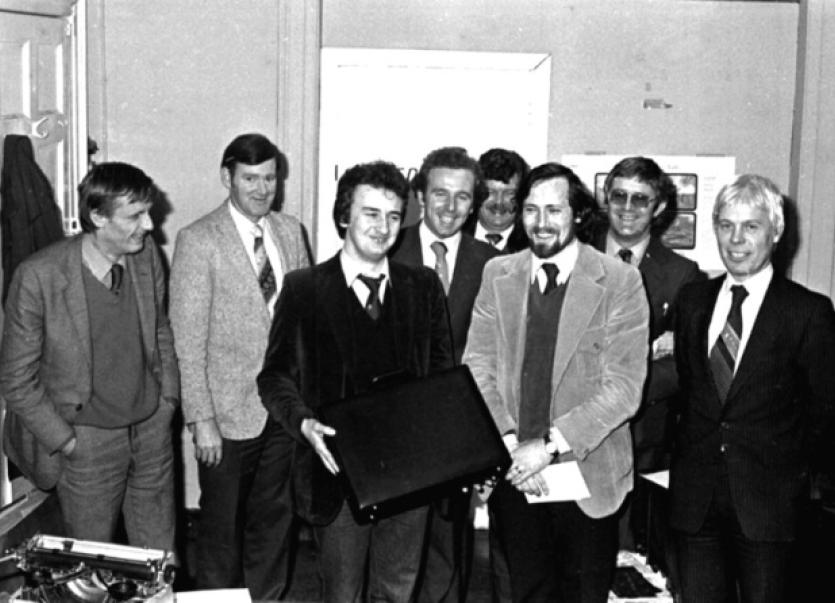 I HAD been putting off the task of clearing the shed for weeks. Like all summer structures left to look after themselves in winter it had taken on a forlorn aspect.

I HAD been putting off the task of clearing the shed for weeks. Like all summer structures left to look after themselves in winter it had taken on a forlorn aspect.

Weeds pushed up through the floorboards, the roof made way for rain that gathered in little stagnant pools. The shed had to go and there wasn’t much left inside fit to rescue. Layers of mould or rust covered the fishing reels, life jackets, books, magazines and God knows what else piled up in the dark corners.

My son and I worked our way through the mess, consigning most of it to the trailer parked outside, ready for the dump.

Close to the end he pulled on something hidden under a pile of old fishing nets and buckets and spades.

“What’s this, Dad?” he said, hauling out a rusting but to my eyes still recognisable symbol of my lost youth.

“That, my boy, is a Remington typewriter,” I replied.

How long had it lain there? We’ve owned the Ardmore cottage for nearly 25 years, and before that I’d carried it with me to Dublin and then to Belfast. I’d parked it in Ardmore when I left for South Africa to become a foreign correspondent. And all these years later, after all the wars and famines and coups, the rise and fall of great men, and through all my own fortune and misfortune, the old Remington was there to remind me of the luckiest start any man ever had.

The Limerick Leader taught me how to be a reporter. I learned the primacy of fact over opinion, that you serve a community best when you hold a mirror showing the good and the bad, that you don’t back off from the truth when threatened by power.

And Limerick was also the city where I met my wife, Anne Flaherty. In those days she was a reporter for the opposition Limerick Echo.

My first editor was my best. Brendan Halligan is a legendary figure in Irish journalism. I still think he was one of the toughest men I’ve ever known. I enjoyed his company but I was also more than a little afraid of him.

The Halligan of the Railway Arms – witty, generous, irreverent – was not the same man you encountered on the ‘Stone’ as the deadline for the County edition of the weekend Leader approached. Then he was pure business – and woe betide you if you screwed up the facts.

The summons “Can you come into my office for a moment?” chilled my youthful blood.

Halligan cared passionately about getting the story right. When he once threatened to throw me out the window for an idiotic error I wasn’t entirely sure he was joking. I think the fear I felt was the best thing I could have experienced. Putting people’s lives in the public domain, quoting them on matters of public interest, reporting the courts … all of these things required an absolute respect for the facts.

Halligan gathered around him a team of fine journalists: Billy Kelly, long-haired, bearded and fearless and my generous mentor; Vince Moran, whose previous career in Australia and America made him seem improbably exotic to my eyes; Jimmy Woulfe, a native of my father’s town of Listowel and with a sharp eye for a news story, and Eugene Phelan, still a Leader stalwart, who taught me what he knew and managed my social life with great efficiency. Phelan’s Ford Escort carried us on many a night-time jaunt.

In retrospect I was perfectly suited to the task of cub reporter on the Limerick Leader. I had a curious mind, a reasonable command of the English language, a brass neck and – in the early days at least – an ability to hold my drink, particularly if it was free. I was also possessed of a Corkman’s confidence that a city like Limerick would naturally fall at his feet.

Thus I could be sent to an evening press reception and be depended upon to turn up the following morning with several paragraphs of passable prose without having made a show of myself. My first evening ‘marking’ was an event held by the National Road Safety Association and on my return I described how the chairman of the said body had ‘lashed’ unsafe drivers. I had seen the word in a tabloid paper a few weeks before and had been storing it for my debut on the Leader.

The paragraphs appeared in the City edition. Swelled up with pride I arrived at the office the following Monday morning. From deep within a cloud of cigar smoke and bristling mischief I heard my name called out.

The interrogator was one Cormac Liddy, scion of a local Fianna Fail family, Peace Commissioner and senior reporter on the Leader. Liddy knew everybody, ballhopped everybody and seemed afraid of nobody.

I stuttered something about lash seeming the appropriate word. My interrogator sneered.

“Appropriate my arse. Lash is what you do to a horse. It is what the Romans and Americans did to their slaves. Nobody in Limerick lashes.”

At this there were appreciative sniggers from around the newsroom. How many times in the years that followed did I hear Liddy address me as “Keane, you ape?”

Yet when I left the Leader after three wonderful years it was Liddy I missed the most. He embodied the paper and the spirit of the city. At times abrasive, often hilariously funny, sometimes a whirl of chaos, but always kind-hearted and decent.

It was he who gave me my first taste of writing for national newspapers when I stood in as stringer while he was on one of his jaunts to the USA as a guest of the Limerickmen’s Association of Chicago (these gallivants were the envy of the rest of us).

I got plenty of experience filing from telephone boxes at Thomond Park and the Markets Field but I have never forgiven him for the non-payment of my fee when I covered the greyhound racing in his stead.

It was a trying experience, to say the least. I knew that greyhounds were skinny and had four legs and would eat a small child given a chance. But I found myself in the press box alongside experts who spoke a language I could never understand while hounds streaked around the floodlit track. Race after race proceeded in a tedious grind. Only the kind advice of the locals meant I didn’t make a complete fool of myself as I phoned the results to a taciturn copytaker in Dublin. Liddy, if you are reading this, I am still waiting for the money.

When I left Limerick to join the Irish Press in Dublin I held a riotous party in Hanratty’s Hotel at which numerous speeches of varying degrees of incomprehensibility were made.

Among the most pungent was that given by Cormac Liddy.

“When you came I thought you were an ape, Keane, and nothing has happened to change my opinion!” he declared. But the following morning when I went out to my car I found, tucked under the windscreen wiper, one of Liddy’s cigars. It was his way of saying goodbye and it brought a tear to my eye.

I am who I am and where I am because of the Leader. Long may it prosper.

- Fergal Keane is a BBC foreign correspondent who has won multiple awards for his journalism and also written a number of bestselling books. A nephew of John B. Keane, he began his career at the Limerick Leader in 1979. This article was included in a 64 page special magazine celebrating 125 years of the newspaper