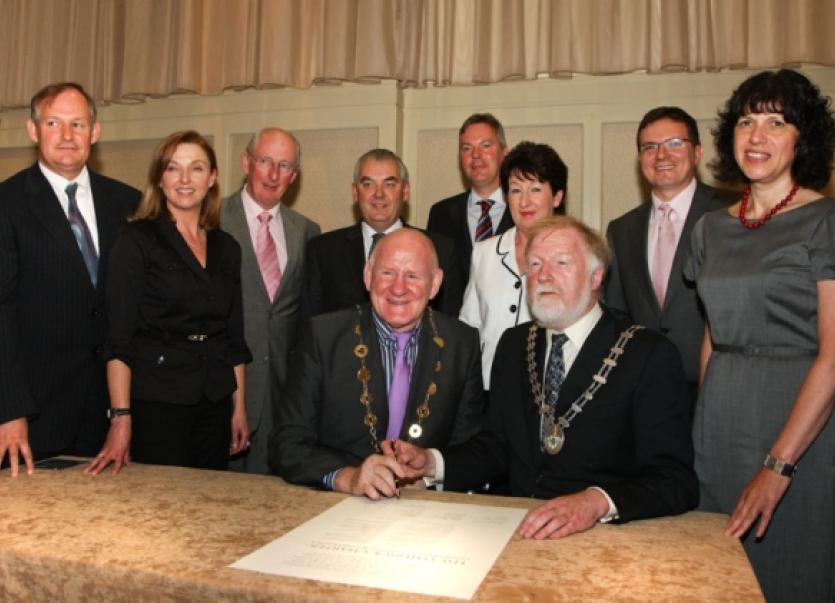 THERE has been a groundswell of support for Limerick’s new €250m economic plan, with the city’s most senior politician pledging immediate action.

THERE has been a groundswell of support for Limerick’s new €250m economic plan, with the city’s most senior politician pledging immediate action.

Speaking to 300 local business people and politicians at the launch of the report in the Strand Hotel, Finance Minister Michael Noonan insisted the report - now dubbed Project Limerick – “won’t even reach the shelf where the dust gathers”.

He pledged that for as long as he remained in government, a promise reflected by cabinet colleague Jan O’Sullivan.

This week, he says a planning application is likely within weeks for a new courthouse complex in Mulgrave Street, the first fillip of the massive economic plan.

It will see the current courthouse complex move from beside City Hall, with this building being used for the political chamber and offices.Mulgrave Street will see “an awful lot of activity” from next year, Mr Noonan said, with up to 300 people employed in construction over an 18-month period on the project, which will also see a major refurbishment of Limerick Prison.

To expedite much of the plan, Limerick City and County Council is targeting JESSICA funding, an initiative administered by the European Investment Bank.

Mr Noonan says the presence of John Moran on the board of the bank gives Limerick a boost, saying: “We have someone there actively working for Ireland, but also being very conscious of Limerick project.”

Ms O’Sullivan added: “There is a new energy in Limerick, something I haven’t experienced before in my years in public life. This plan will harness and focus that energy and I look forward to working with all stakeholders and the people of Limerick to make it a reality.”

She said it is crucial to “grasp new challenges and opportunities such as the economic development role which will rest with the Council.”

Limerick Chamber CEO Maria Kelly – one of the signatories of a charter committing to cohesion and convergence – said the securing of funding for the projects is crucial.

“The masterplan for Limerick sets out ambitious and innovative development plan that will change the look and economy of Limerick. Once funding is secured, which is critical, we are confident that the plans will stimulate significant economic activity and investment in Limerick and the mid-west.”

Local Government Minister Phil Hogan, who officially launched the document, encouraged the public to have their say on the 142-page document, while it is on display at County Hall and City Hall for the next few weeks.

Submissions are currently being invited, and Mr Hogan said: “It is there for anyone to add, subtract and indeed amend this plan. It is your plan for the next 20 years. It is a blueprint to renew, reinvigorate and reform economic life.”

City TD Kieran O’Donnell welcomed the proposal which could see a National Diaspora Centre in the former Dunnes Stores building in Sarsfield Street, saying: “This is a project which I have been driving for some time. I believe it has the potential to become an iconic attraction for Limerick and has potential to drive very substantial direct and indirect employment.”

Mayor Gerry McLoughlin added: “An organised and combined strategic approach will be central to the success of the economic and spatial plan today being launched for public consultation. We are launching a platform for a renewed Limerick, a unified Limerick and a Limerick with a bright future to which everyone can look forward to with great hope and anticipation.”

Cathaoirleach Jerome Scanlan said: “Working together, bonding together to overcome challenges can not only raise our spirits and strengthen our relationships, but also put structure on the potential Limerick has a in a real, meaningful and dynamic way.”