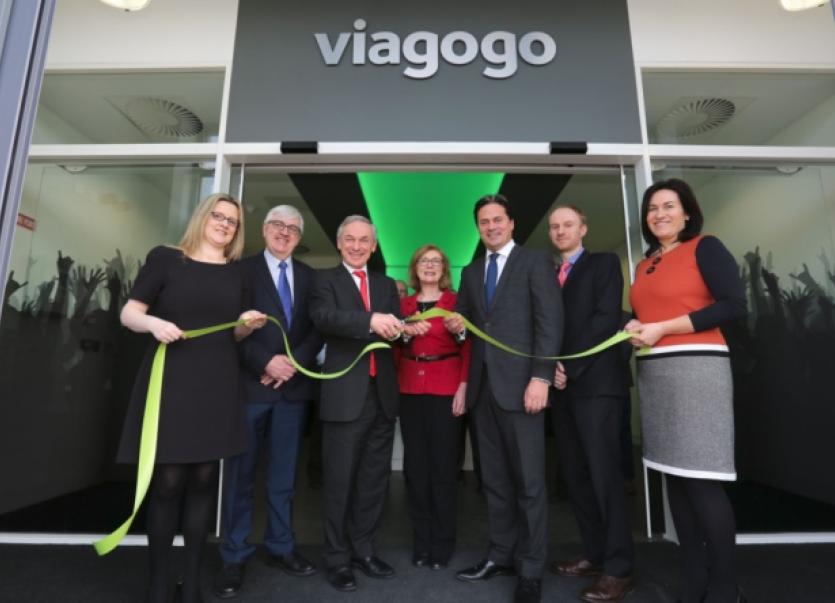 ONLINE ticket agent viagogo this week announced plans to more than double its workforce in Limerick, backed by IDA support.

ONLINE ticket agent viagogo this week announced plans to more than double its workforce in Limerick, backed by IDA support.

The e-commerce company, active in over 55 countries around the world, announced it intends to more than double its workforce over the next three years, taking it from 100 to over 200 employees.

Viagogo, which had been set-up in a temporary city centre location, made the announcement at the official opening of its new state of the art operations centre on Monday, a 14,000 square foot facility located in the former Flextronics facility in the Kilmurry Business Centre.

Global head of communications, Oliver Wheeler, said viagogo had consulted “10 companies here in Limerick and they all gave us great confidence that this was a location to work in and we were quickly reassured by the local talent pool of multi-lingual people”.

In fact, the local talent pool was cited as the key reason the company chose to locate and in turn expand its operations in Limerick - with further expansion in the future a possibility, the Limerick Leader understands.

“We are a global business, we have offices all over the world, but we were given great support by the IDA. We have a great local talent pool here, and that is why we are making this announcement today,” he said.

“We initially looked at Dublin and then we wished – it was very important for us to become a regional employer of choice.”

viagogo - which operates the world’s largest online ticket marketplace, a global online platform helps people to buy and sell tickets to live sports, entertainment and theatre events all over the world - also intends to “broaden the roles available here, so that they are not just customer service operations, but also into sales and software development and finance”.

““We are looking for people who can speak multiple languages, and over two thirds of the people in this location can speak a range of languages. We now have over eight languages spoken here, from 26 nationalities,” said Mr Wheeler.

The news was broadly welcomed across all sectors this week. Jobs minister Richard Bruton and cabinet colleague Jan O’Sullivan, plus Bruton’s party colleague Kieran O’Donnell, attended the opening of the operations centre, and Mr Bruton waxed lyrical about the company, describing viagogo as “a fast-growing, born-on-the-internet company”.

“These are one of the emerging companies that we have targeted, they are very vibrant and it is great that they have picked Limerick, who has a great offer in terms of the skill base here, and now they are growing, adding 100 extra jobs, doubling again,” he said.

“It is a great sign that this is a company that is thriving in the Limerick soil and much do we want to see that repeated in the future,” he added.

“I think the fact that we have now built a reputation in Limerick as being a very good place to establish your company and indeed to develop your company is very positive and it bodes well for the future,” added the Labour minister.