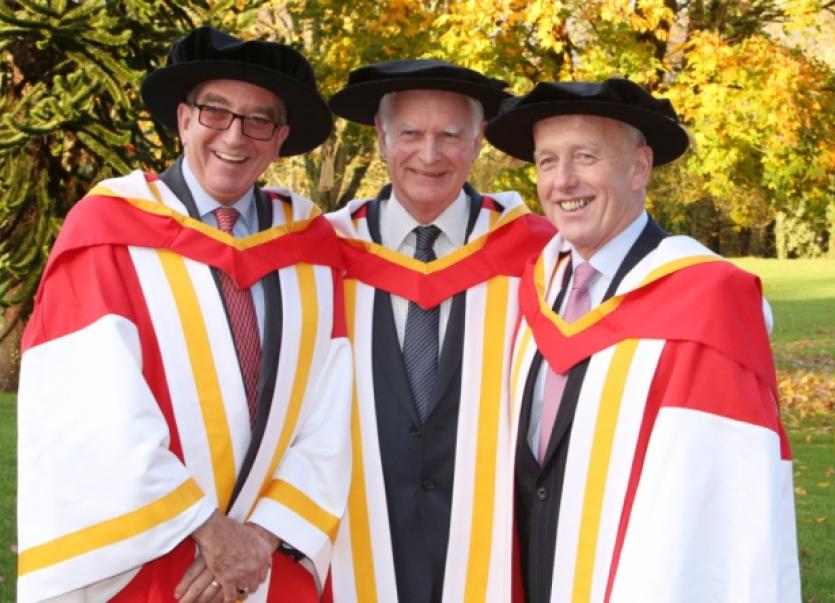 THREE men described as being among the city’s “most illustrious sons” have been honoured by University of Limerick.

THREE men described as being among the city’s “most illustrious sons” have been honoured by University of Limerick.

Mr Boland worked in the financial world up to his retirement in 2002, with his employers including PricewaterhouseCoopers and Metcalfe Lilburn and Enright.

He introduced a tax designation scheme for Limerick, which created opportunities for urban renewal in the city centre.

Mr Boland, a close associate of JP McManus, first became involved in the University of Limerick as an advisor in 1982. At the time, it was known as the National Institute for Higher Education.

He proposed the setting up of Plassey Trust, which developed Section 23 student residences.

Alongside Mr Tiernan, Mr Boland was one of the men to establish the Limerick Enterprise Network, which has helped create up to 600 jobs through various initiatives.

Speaking before being conferred, Mr Boland described his reaction as “elated”.

Born and raised in Corbally, Mr FitzGerald was one of the world’s most influential marketeers, rising up through the consumer goods giant Unilever to become its chairman and CEO.

He also had a strong sense of social justice, and while working for Unilever in Apartheid-era South Africa, he ensured every worker was treated equally, regardless of race, gender, colour or creed.

It was this which inspired the late Nelson Mandela to ask Mr FitzGerald to head the British branch of his charitable foundation.

A regular visitor back to Limerick, the St Munchin’s educated man chairs the Munster Commercial Board.

He said: “It is quite moving really. I am fortunate enough to have an number of honorary doctorates, but to get one from the university in your home city is particularly special.”

Finally, Mr Tiernan was given an honorary degree for his setting up of Arthur’s Quay Shopping Centre in the 1980s, plus his pioneering work in the early days of the university.

Alongside this, he was the main influence behind the foundation of the Limerick Enterprise Development Partnership on the old Krups site, which has delivered 700 jobs since 1999.

Each man was given a standing ovation from the 400-strong crowd.