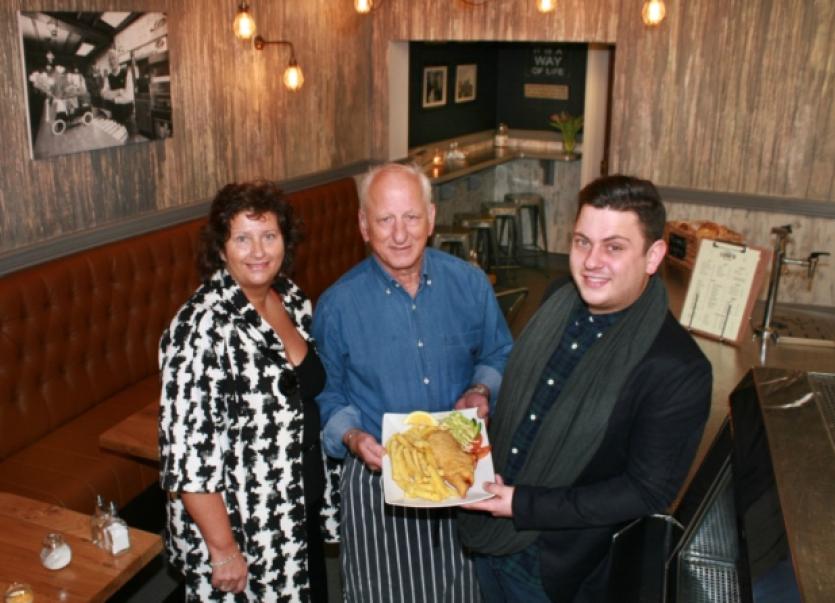 IT was a favourite haunt of Richard Harris and rugby hero Paul O’Connell is also known to call in for his fresh cod and chips.

IT was a favourite haunt of Richard Harris and rugby hero Paul O’Connell is also known to call in for his fresh cod and chips.

Now the once dark and cramped diner, Luigi’s in Parnell Street, has been transformed into a New York type diner, thanks to the innovative work of Tullio Orlandi, son of the owner.

The budding 26-year-old interior designer, who has just completed a stint working in New York could not wait to get back home to transform the interior of one of Limerick’s most popular Italian takeaways.

His dad Luigi from Atina, in Italy opened his takeaway fish and chip restaurant in 1983 and has become a huge success with regular long queues outside.

Located across from the railway station, Luigi’s was a regular haunt of Richard Harris. A striking photo of Harris is one of the few features to remain following the extensive refurbishment.

In it he is eating chips with Luigi after a few pints in his favourite Limerick pub, Charlie St Georges, which conveniently was next door.

Tullio returned home before Christmas determined to change the “dark and cramped interior”.

“My inspiration for Luigi’s was taken mostly from my love of rustic Brooklyn design. Before the Industrial Design craze had come to Ireland it was in America so I had been working with this type of design while I was there, so when mom and dad asked me to give them a hand with doing it up I took my inspiration from old school rustic and industrial design,” explained Tullio.

After graduating in interior design from DIT Tullio headed to New York and spent over a year working on mostly residential and commercial design, including one sole project where he redesigned a sports bar in Brooklyn called the Bench.

“I brightened it up using metallic but I also wanted to keep it very industrial and almost old looking, like it had been pulled back to the bare walls. The ceiling which is the main feature in Luigi’s was sourced from an American company, the ceiling tiles and coving are all hand beaten tin, which ages over time, so it will get better with age,” explained Tullio.

The walls which is another feature to Luigi’s were painted by Noel Donnelan by splashing paint onto the walls and layering the different colours up to create a messy dirty look. Martin Dylan completed the carpentry work.

Inspiration for the tiles on the back wall came from the NY subway. “Although a lot of the design was new, instead of getting all new chip pans we worked with carpenter Martin Dylan to clad the front of the counters in a rustic reclaimed wood to age the pans without touching them. One special feature in Luigi’s is the counter tops which are covered in a special stainless steel that is pressed to add a design to it.”

The lighting which sets the mood in Luigi’s was sourced by Mid-west Lighting who sourced original Edison bulbs. “There are many interpretations of the bulbs out there but to find originals that work in Ireland was something special. I went with cluster lighting for the new seating area which has a 1920’s dinner look,” he added.

Along with the 1920’s Industrial look Tulllio’s sister Lucia, who is a graphic designer in New York came up with Luigi’s new logo and font which can be seen on the menu board and the new clipboard seating menus.