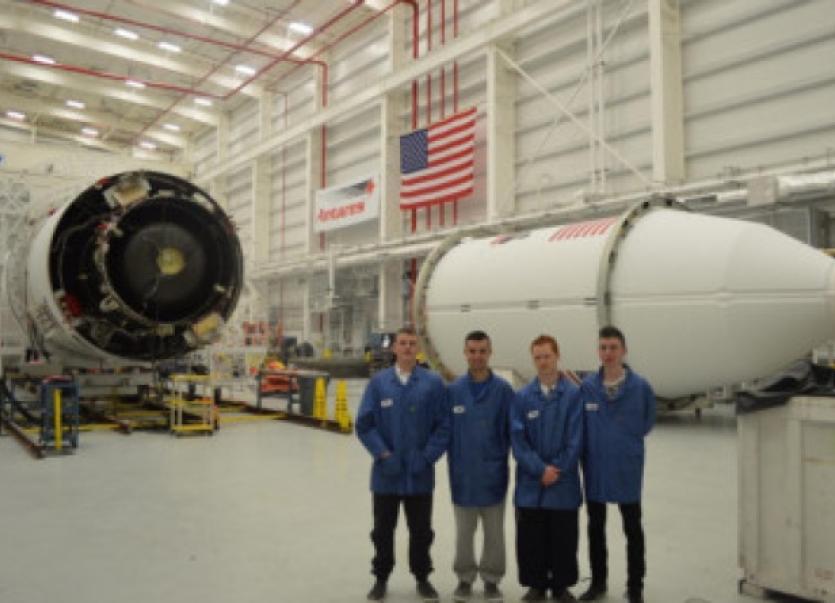 AFTER months of work, four transition year students are anxiously awaiting the call to find out when their project will be blasted into space.

AFTER months of work, four transition year students are anxiously awaiting the call to find out when their project will be blasted into space.

Not every transition year class imagines their that project will see them being flown to the NASA Wallops Flight Centre in Virginia.

But the teenagers at St Nessan’s community college are going one step beyond that.

Led by construction teacher Gavin Doyle, the four have been examining whether reinforced concrete solidifies and holds together in space. If successful, their investigation could help astronauts build houses on the moon.

This week they will be waiting for the call to find out when their materials have been blasted off into space in a rocket from NASA. The equipment will be transferred from the rocket to the space station, and the concrete will be mixed by astronauts, following the instructions of the students.

The engineers of the future - two of whom won a prize for tests on organic apples at the BT Young Scientist competition this year - are Jamie O’Connell, 16, from Cratloe, Jonathon Roche, 16, Old Cork Road, Jason Hannan, 15, from Caherdavin, and Kevin Hanley.

If successful - and the results will be known in the autumn - their formula could not only help missions on the moon, but could also prove lucrative for Irish Cement, which sponsored their eight day trip to America this summer, and the building industry in general. Their once-in-a-lifetime opportunity arose when Mr Doyle spotted an advert in a national newspaper about a competition called The Only Way is Up.

It was organised by the Irish Centre for Composites Research at the University of Limerick, and sought idea for space experiments.

Little did they know last September that their discussions about cement, sand, water and basalt fibres would lead them this far.

Their experiment will spend 30 days orbiting the earth in the International Space Station, and will then be returned to the students, who will compare the impact micro-gravity had on the concrete, with the results of a ground controlled experiment they will be conducting back at their north-side Limerick college.

“We didn’t know much about it in September, so it has been a big leap to get it over there. We learned a lot of things from trial and error. It’s been a really good experience; we’ve learned a lot and met a lot of good people,” said pupil Jamie.

Mr Doyle, who has been a teacher in the school for seven years, said their experiment has opened up a completely new area of research, and is proud of his students, who have since gone on to lecture third level engineering students at the University of Limerick on their findings.

Principal Eugene O’Brien praised the achievement of the pupils under Mr Doyle as “fantastic”.

“This has encouraged them to open their horizons beyond what the norm would be. Their choice of subjects for fifth year has also changed. You can’t get any better than sending a project into space. The short time it took from the inception of the idea to going into space is phenomenal. This is the best thing that has happened for any student here, in spite of some great achievements. It really tops it all.”