Ivan’s staff in Limerick: ‘We will stay for as long as it takes’ 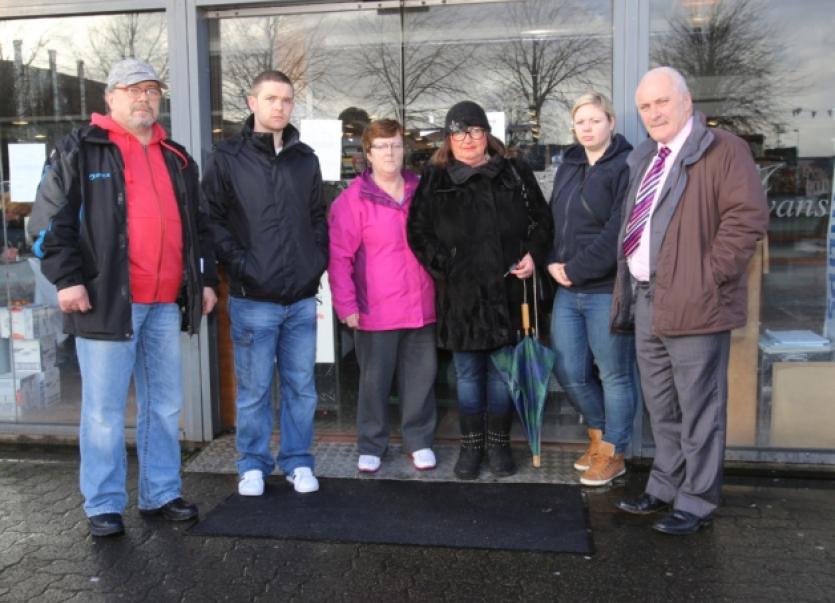 The 30 workers made redundant from Ivan’s Stores in Caherdavin, which closed suddenly last Sunday, were preparing to bed down for the night in the store.

This is in protest at the fact that many workers’ pay cheques have bounced, they have not received P45 forms, and other documents, which they need to claim social welfare, and there is no sign of any redundancy settlement at present.

The former workers, many of whom were employed there for more than 20 years, said they were given no notice of the closure - which came after 38 years of trading.

Staff were called to the shop on Sunday night, and given the shock news, which was blamed on tough trading conditions.

However, they say they have received a number of different explanations for the closure from its management, including voluntary liquidation.

But many of these have not been honoured by the company.

They have received support from SIPTU officer Michael Kiely.

Ms Sheehan added: “It really hit home when we could not contact anyone from the company. It was a major shock. We were told about the closure on Sunday night, yet here we are with nothing. All we want is our P45s, wages, and out letters. But he has taken it upon himself to close the doors and not co-operate”.

Mr Cremins set up the store in 1976 - but it was his son-in-law Christian who addressed staff this Wednesday.

However, he retreated to offices upstairs in the shop after staff were dissatisfied with his response.

Mary said staff feel “betrayed”, because of the amount of service they gave.

“We came in on our days off. There was such goodwill, because this is the type of people we were. We loved dealing with the customers. In the month of May, when there more cakes to be made, we would go into work at six o’clock in the morning knowing there were so many orders. And we worked extra without pay,” she said.

Mary has never had to claim social welfare in her life, and says the experience made her very upset.

Moyross lady Mary Lee, worked as a confectioner at Ivan’s for almost 30 years.

She says her life is on hold now.

“I feel treated terribly after all the time I spent working for Ivan’s. I cannot access anything. Everything is on hold now, because the cheque that bounced had two week’s worth of wages there,” she said.

Support for the workers has been coming in from across the city’s northside, with local businesses sending over food supplies, and drinks, plus members of the public expressing their support.

Sinn Fein councillor Maurice Quinlivan urged bosses at the store to engage with the workers.

“I have been using that shop for many, many years, and have always found the staff to be friendly and hard working. It is only proper their loyal service and hard work be recognised. I find it totally unacceptable in this day and age that any owner of a business closing down is not engaging with their staff or union,” he said.

Fianna Fail’s northside election candidate Joe Crowley added: “It’s bad enough their jobs are gone - and most of those people would have thought they’d have jobs for life. They have to do something, and be encouraged.”

The workers also got a visit from Anti-Austerity Alliance candidate Cian Prendiville.

He said: “The company have messed the workers around, cleverly staying open over Christmas, and for the big Munster match, making their money and then running. They should be forced to open the books, so the workers can see for themselves where all the money has gone.”

In a statement released late on Wednesday night, Mr Cremins said he and his family “are devastated by the sad turn of events”.

He went on to explain that “whilst trading conditions had been extremely difficult for some time, that the pressures that necessitated eventual closure last Sunday were sudden and unplanned”.

He continued, that he and the Cremins family particularly regretted the shock and inconvenience that this had caused to the staff at Ivan’s, many of whom had long years of service.

“They can be assured, and have been assured, that they will receive all their entitlements and the necessary arrangements are being made to put this in place,” he said.