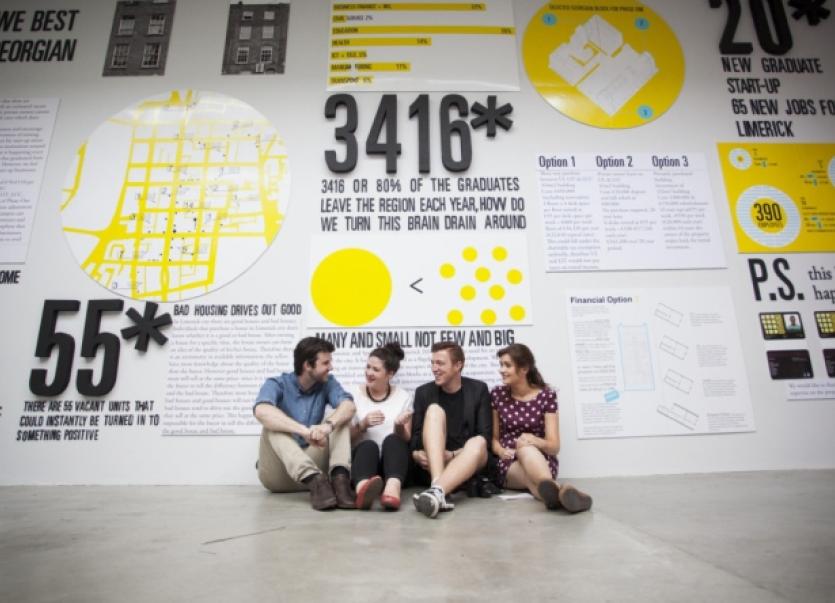 A STAGGERING statistic jumps off the wall as you enter the Limerick City Gallery of Art, home for the last eight weeks to an innovative, multi- disciplinary ‘think tank’ seeking to showcase ideas for Limerick’s future.

A STAGGERING statistic jumps off the wall as you enter the Limerick City Gallery of Art, home for the last eight weeks to an innovative, multi- disciplinary ‘think tank’ seeking to showcase ideas for Limerick’s future.

It reads: ‘80% of third level graduates leave the region every year.’ Side by side to this, the question is posed: ‘How do we turn this brain drain around?’

Another stat leaps out regarding the nearby Georgian quarter: ‘there are 55 vacant units that could instantly be turned into something positive.’

Another says that 20 graduate start-ups could generate 65 new jobs for Limerick.

It is simple stuff, presented in a simple yet powerful way, and the overriding message is that it is time for the local authority - the “powers that be” - to sit up and take notice.

The gallery is hosting the fruits of a research process styled as the Intelligence Unit (IuLimerick), a unique collaboration between the architecture and business schools in the University of Limerick, seeking to generate new ways and ideas for the region and educational powerhouse to “work together to really change the city”.

Dr Stephen Kinsella, senior lecturer in the Kemmy Business School, says standing inside the room is “like being inside the internet”. His counterpart in the School of Architecture, Professor Merritt Bucholz, likens it to an “ideas factory”.

While Prof Bucholz has been hosting Iu think tanks for some years, this is the first collaboration with the business school, drawing architecture, economics and marketing graduates together, working on projects that are, in his words, “very realisable, very practical ideas, which we want to become jobs for our graduates, that is the end game”.

“We have everything we need right here to turn the place around. We are not capturing our greatest asset, which is our young graduates,” he explains.

The architect wants Limerick City Council to sit up and take note, to fund and support the projects presented and potential ones that could, in line with the ideas presented in the 2030 plan for Limerick, attract venture capital into the region.

What is needed, he is asked?

“I think the strongest message coming out of this is that we are ready to do this. We have the people, the ideas, the ambition, we are ready, now we need the support,” he explains.

The analysis, drawn from research and public suggestions, was narrowed down to focus on specific plans, with ‘themes’ emerging from the work.

These include developing an artisan food network, looking at special areas of conservation in the city and how they can be used to greater effect, how to re-occupy the Georgian quarter and how to incentivise participation in education.

Accountants have pored over the plans, costing them. They are ready to go, jobs ready to be created, money to be made, vacant units to be taken over.

“The 2030 plan we are trying to tie into, set out a number of initiatives that relate to start up funding, getting venture capital into the city,” he says. “Before you can do all of that you need ideas, you need to know what you are going to do with it and that is what this is about.

“We need to generate the ideas that can be supported by the instruments that the 2030 plan sets out - these are way cheaper than building loads of buildings down in Arthur’s Quay.

“We can start now, we don’t have to get planning permission and raise funding; these things are ready to go and that I think is quite powerful and I hope it is recognised that it is quite powerful.

Stephen Kinsella points out: “The nuts and the bolts of the policies are actually there. These programmes, incentives – here is how it is going to work.”

“It is design thinking, you can see there is mapping expertise, combined with hard facts and the marketing material – how this should look – and thinking outside the box.”

Watching nearby is Tom Enright, economic development director with the new joint local authorities, a man who has attended these presentations before, who knows that such a hothouse of ideas is where to get the best ones to regenerate the city.

He lauds the research and how it has been presented: “It is a fantastic project. It is one that really has engaged the university in some of the work that is going on in trying to reactivate and revitalise the city centre.

“We will support them whatever way we can,” he adds.

Grainne Hassett of the architecture school says the programme was about “two key partnerships, one with the local authority and the other with local businesses”, and local experts were consulted during the project, while a twice weekly public consultation took place over the eight weeks, she notes.

Prof Bucholz hopes a 12-month project, along these already established lines, will get funding.

“I think the city should say, here is funding to do this for another 12 months at least, and it would start washing its face very quickly because you could attract venture capitalism to that sort of thing, get seed funding for one of these ideas. I think this is really very tempting,” he explains.

“I have never got any funding or support by just asking for it. You have got to show people what it is you are going to do.

“Within the 2030 plan, there is funding clearly identified for this kind of thing, so funding a think tank for 12 months or longer is a total win-win situation. You are getting, for very little money, incredible ideas, but you are also getting people willing to carry those ideas forward and turn them into reality, that is the bottom line.”