Leading IT firm chooses Riverpoint for European centre and 62 jobs 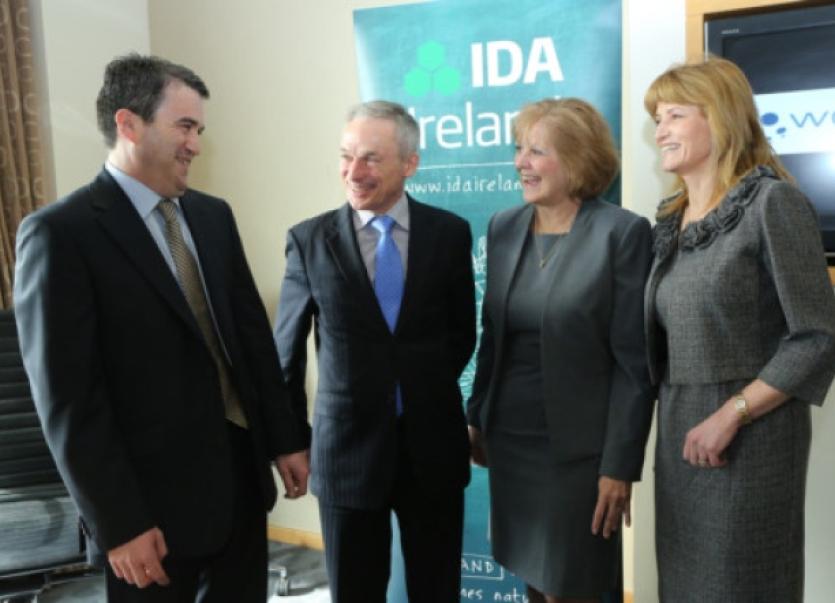 THE decision by a leading global IT services provider to locate in the heart of Limerick is a “vote of confidence” that the city can attract high-tech investment, according to city manager Conn Murray.

THE decision by a leading global IT services provider to locate in the heart of Limerick is a “vote of confidence” that the city can attract high-tech investment, according to city manager Conn Murray.

Supported by the IDA, Worldwide TechServices will ultimately create 62 jobs in setting up a European operations centre at Riverpoint.

Servicing millions of users, networks, servers, other hardware and software around the world every day, WorldWide Tech Service counts among its clients some of the biggest names in information technology including IBM, Dell, Infosys, Wipro and TCS. It employs 4,000 people across the globe and performs nearly 13 million service events annually for its clients.

“Whilst operating globally, we are not a household brand,” said Lloyd Nolan, WWTS senior vice-president of Europe, Middle East and Africa (EMEA).

“We are the invisible service provider working on behalf of the global brands. Our ability to consolidate their global service offerings and manage IT service events across 85 countries today, places us in a unique position in the marketplace. I am proud to be part of the team bringing WWTS to Limerick where I am confident we can grow our global business from a strong base”.

A former student of St Nessan’s and UL and now resident in Castleconnell, Mr Nolan was credited by WWTS chief operating officer Donna Martin as being the driving force behind the company’s decision to locate the centre in his home town.

Mr Nolan said the investment decision - the culmination of a year-long courtship with the IDA and local government - had as much to do with access to a skilled and motivated local workforce, the track record of companies who have based themselves in the Mid-West, as it did the favourable corporation tax rate.

With growing the numbers at work in the heart of Limerick one of the city manager’s main priorities, Mr Murray said the investment was “a demonstration of confidence that we can support industries of this nature”.

“And of course, it is very important to bring them into the city centre because our focus is on revitalisation and creating activity and opportunity within the city itself. But this has a knock-on effect throughout the county and when you bring in jobs of this quality, you present opportunities for graduates.”

Recruitment in Limerick is already underway and WWTS expects to have 25 on the payroll by the end of this year with the target of 62 jobs being met soon afterwards. From Riverpoint, WWTS will manage EMEA service delivery through its shared services and solution centre including finance, solutioning, command centre and sales support.

Commenting on the announcement, Ms Martin said: “I am delighted to be here today as WWTS establishes our new European operations centre in Limerick. Limerick was chosen for this operation due to its excellent skills base, established technology cluster and connectivity to the Boston area and excellent reach capacity into mainland Europe. I look forward to the growth of WWTS in Ireland.”

And Barry O’Leary, CEO of IDA Ireland, said: “WWTS is an excellent addition to Limerick’s technology cluster. WWTS has a growing customer base and many high profile customers operating in global markets. Dell, HP, IBM, Sony, Canon and Apple are just some of the company’s customers. This is an excellent win for Limerick and the Mid-West region.”

Deputy Kieran O’Donnell, who met with the management team from Boston last November, said he wished the company every success and paid tribute to Mr Nolan’s role in bringing the investment to Limerick. The announcement brings to 1300 the number of IDA supported jobs created in the Mid-West in the last two years.