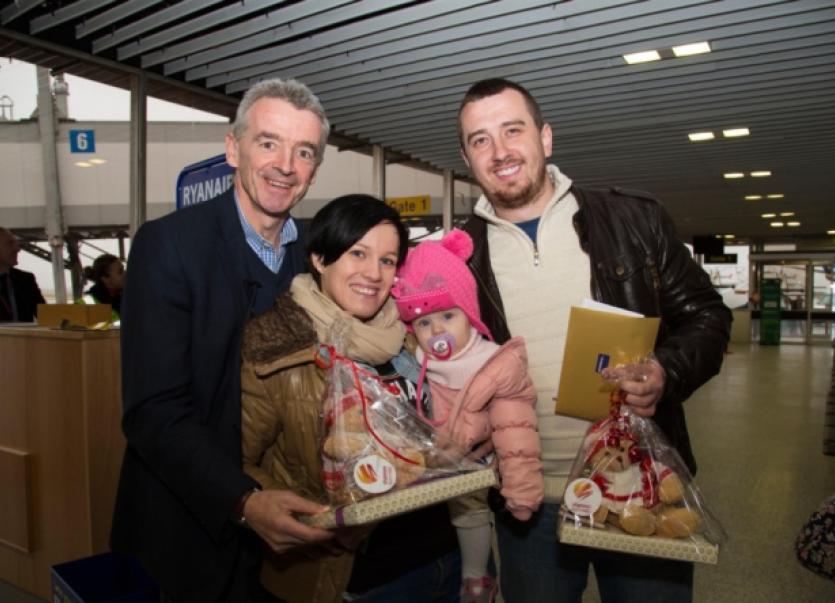 RYANAIR is looking at adding UK and continental routes at Shannon towards the end of next year, potentially boosting traffic numbers by “a couple of hundred thousand”, according to CEO Michael O’Leary.

RYANAIR is looking at adding UK and continental routes at Shannon towards the end of next year, potentially boosting traffic numbers by “a couple of hundred thousand”, according to CEO Michael O’Leary.

Mr O’Leary was in Shannon to make a presentation to the 13 millionth passenger to have used Ryanair since it began flying in and out of the Mid-West.

After a year in which Ryanair passenger at Shannon grew by 70%, Mr O’Leary said a shortage of aircraft meant no new routes were likely to be added until winter 2015 - but that they could include British services lost to Shannon through Stobart Air last week and new connections to continental bases Ryanair plans to open in places like Copenhagen and Bratislava.

Mr O’Leary had praise for Minister for Finance Michael Noonan, who was present for a press conference, and the government for abolishing airport departure tax and freeing Shannon from the DAA.

“We are proud to confirm,” said Mr O’Leary, “that we are bang on target to meet our commitment this year of growing our traffic in Shannon by 300,000 passengers. That is in the first full year following the repeal of the travel tax from April 1 to March 31. In fact, we expect to carry an extra 310,000 passengers through the airport over that 12-month period which makes Shannon the fastest growing airport in Ireland once more and also means that our traffic in Shannon will grow to over 750,000 passengers this year.”

On whether Ryanair might fill the gap left by Stobart’s (formerly Aer Arann) decision to pull services to Edinburgh, Bristol and Birmingham, he said there was “ a very strong possibility” Ryanair could reach a deal with Shannon to take on “at least that kind of capacity from September 2015 onwards”.

“We will certainly be looking to add a couple of hundred thousand passengers here next winter and it may be a mix of those kind of UK routes but also some European stuff as well. Aircraft availability is the issue for us so that’s why once we get to this time next year - we are into the delivery of 22 aircraft this winter and next winter we get 45 aircraft - we will have a lot more capacity to play with.

“And we would be very keen, as everybody has said, to talk to and continue to build on the very successful momentum that is here in Shannon thanks to the scrapping of the travel tax and the independence of Shannon itself.”

As somebody who had been vocal in his criticism of politicians in the past, Mr O’Leary said it was now appropriate that he credit Michael Noonan for making sensible decisions on tax and aviation policy.

Ryanair, he said, had “lobbied long and hard” for the abolition of the travel tax which had “devastated” Irish tourism.

“I think it was very brave decision which Minister Noonan took last year. There were many advisors in government who advised him ‘Don’t do it, minister; we will lose the revenue’.

“To his eternal credit, Michael Noonan took the brave decision in the teeth of quite a degree of opposition from bureaucrats and naysayers and he has been fully vindicated.

The result was that Irish tourism was “booming this year”.

Minister Noonan said that as the only was to bring tourists into Ireland was by boat or plane, there would be no tourists if “you don’t get your airports policy right”.

“Limerick this year was a tourist city for the first time in living memory,” Minister Noonan said.

“It often had transit passengers either the night after they landed from the United States or before they left but this year there were tourists all over the city from Easter right up almost to the present. There weren’t that many tourists in Limerick since the Vikings and it’s thanks to Michael O’Leary that turnaround has happened.”

When he had discussed abolishing the travel tax with Mr O’Leary, they had to operate “on a basis of trust”. He had trusted Ryanair to live up to its word and bring the tourists if the tax was reduced to zero. And Ryanair had more than lived up to its word, the minister added.

Ryanair’s 13 millionth passenger at Shannon, meanwhile, was Piotr Rachuta, who was heading back to Wroclaw in Poland having visited relatives in Tralee. Piotr and his family - as well as every passenger on the Wroclaw flight - were presented with free Ryanair flights to celebrate the milestone.