1,000 line out for ‘shock’ in Limerick assault course 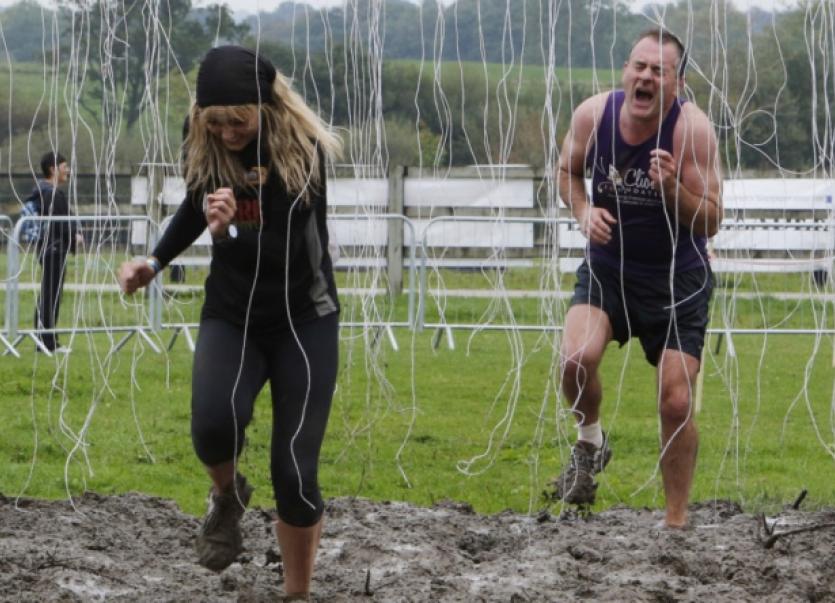 NEARLY one thousand people will take part in a gruelling, military style assault course in Adare this Sunday, including many well known local and national faces.

NEARLY one thousand people will take part in a gruelling, military style assault course in Adare this Sunday, including many well known local and national faces.

Those braving more than 30 man-made and naturally occurring obstacles over the 7.5km in the grounds of Clonshire Equestrian Centre incliude Limerick hurling manager TJ Ryan, singer and presenter Leanne Moore, and the TV3 group weather presenter with 3e Deric Ó h’Artagáin, who will be making the experience into a programme for his new online series Dare Devil.

“It’s a very different course this year, there will be some more daring and daunting obstacles, so for anyone that feels that have done it already, they haven’t – the 2014 course will be completely different and a whole new challenge,” said organiser Ray Nash.

Speaking of last year’s success, he said: “We wanted this to be an experience that participants would remember forever. It’s not every day you find yourself getting into a skip of iced water before crawling on a mud bank under a bed of electric wires.”

Participants will have to crawl under barbed wire, wade through pits of mud, climb bales of hay stacked 20ft high, navigate courses wired with electric shocks, amongst a series of other challenges.

Limerick charity, Cliona’s Foundation, which provides financial assistance to the families of critically ill children, is the official charity partner for the second year running.

“We are delighted to be the chosen charity partner again this year for Adare to Survive,” said Brendan Ring of Cliona’s Foundation.

“As a participant last year I found it most gratifying and exciting. It’s always rewarding to be able to raise funds for sick children across Ireland but also taking part in an outdoor activity. I found the course both challenging and exhilarating and I had a great sense of achievement having completed it,” he enthused.

Brendan said the “sense of community was so heart-warming” at the event, especially as he was cheered on to complete the course in spite of an ankle injury at one of the final obstacles.

Fifteen competitors are representing two local pubs – An Trasnán Bar in Ballylanders and Scoby’s Bar in Hospital. Their teams have been training hard, and are doing the event for two very deserving charities – Cliona’s Foundation and Special Olympics Ireland.

Explaining the motives behind his chosen charity, team captain, Brian O’Callaghan, said having volunteered with Special Olympics Ireland this year, “a charity very close to my heart”, he was asked if he would be willing to work voluntarily with the Irish delegation at the World Games in Los Angeles in 2015.

“In accepting this invitation, I also pledged to raise €5000 to help with the costs incurred by the delegation. I hope to raise the majority of this amount through various fundraising events and I will personally cover the remaining costs,” he said.

One of the largest teams registered to date has been put together by West Limerick couple, Tom and Mary Flavin, and includes friends and colleagues from the Limerick Strand Hotel and University Limerick Hospital Intensive Care Unit.

The Brian Hunt Memorial has also entered a team to raise funds for Cliona’s Foundation and will use the occasion to come together to remember Brian, who died suddenly in 2011.

A new initiative this year sees the organisers and Cliona’s Foundation taking advantage of the social media phenomenon of selfies by asking people to take photographs of themselves, posting them on their social networks and asking family and friends to donate by text.

“We will have lots of props on site on the day,” said Ray. “We hope that these will capture everyone’s imagination and motivate them to take a #ATSelfie to post on Facebook and/or Twitter with a message asking family and friends to text Cliona to 50300” to make a 2euro donation.

Registration is open on Sunday from 10am and those who register on the day will be able to complete the course in the late afternoon. It is €50 per person on the day regardless of group/team size.

The after party is at 8pm in Sean Collins’ Bar, Adare.