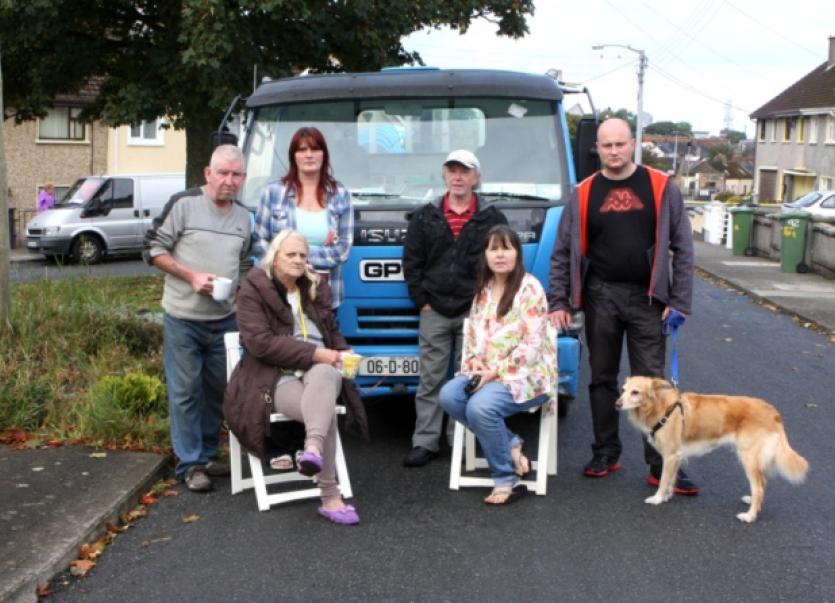 There was a Garda presence at a protest against the installation of water meters at Saint Lawrence Park ths week.

There was a Garda presence at a protest against the installation of water meters at Saint Lawrence Park ths week.

Residents of the Garryowen estate, who blocked workers from installing the meters from seven o’clock in the morning, said the protest was entirely peaceful.

Local lady, Mary Honan, said they offered all involved - workers and Gardaí - tea, but would not stand down from their protest. “They are not going to see any violence from us because we have offered everyone of them a cup of tea. We will sit on the man holes. We will all be keeping a close eye out and the minute they descend on us we will all be out again,” she said.

One of the trucks left at around midday, while two vans remained for some time, but no water meters were installed.

The protest was made up of up to 20 of the estate’s residents throughout the day along with local councillors.

Ms Honan, said the residents of Saint Lawrence Park acknowledge their protest was small, but they hope it would encourage others to do the same.

“Everything has to start somewhere, nothing grows unless it starts off as a seed and we are that seed, hopefully, from which everything will grow and grow. We are not saying that we can guarantee we will have any effect, but we are making an attempt, this is us saying no.

“We come from a country that has fought for centuries for human dignity. There are very few cities in this country who have fought for freedom and for their rights as a much as Limerick has and we are just being pushed into the ground, enough is enough,” she said.

At the time of going to print Irish Water were yet to respond to queries about this issue.

All houses serviced by a public supply that are not fitted with a water meter will have to pay a flat rate imposed by Irish Water in January.

Residents of the estate said they will not pay this bill in January.

“We appreciate that we will probably end up getting bills in January, now we are not going to pay them. There is one thing having a silent protest by not paying, but we feel very strongly that we want to have a physical presence in protest, however small.

“We do represent all the other neighbours predominately elderly and they do not want the water charges,” said Ms Honan.

This comes after protests were made by residents on the North side of the city; Kilteely, Thomondgate and other areas including Delmege Park, Moyross, a number of weeks ago, blocking workers from installing water meters.

It is now unsafe for up to a third of city residents to drink their water due to elevated levels of lead.

This was first discovered at the end of July when residents in Ballynanty were warned against drinking their water. Since then a number of other areas in the city have also been warned about lead in their water.

These householders have been advised as a precautionary measure, not to drink the water, or use it for preparing food or drinks.

Irish Water said the water can be used for toilet flushing and bathing or showering.

Studies have shown lead is highly toxic to the heart, bones, intestines, and reproductive and nervous systems.