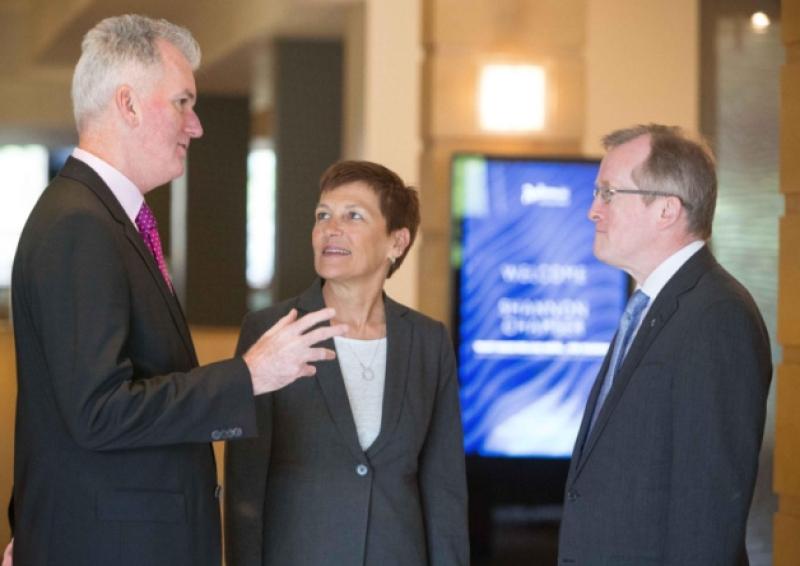 AMERICAN Airlines’ senior vice-president Suzanne Boda might have caused some to bristle at the Shannon Chamber lunch when she referred to the Limerick hurlers as “close to sporting royalty”, but her comments on the airline’s commitment to Shannon will have been music to the ears of many.

AMERICAN Airlines’ senior vice-president Suzanne Boda might have caused some to bristle at the Shannon Chamber lunch when she referred to the Limerick hurlers as “close to sporting royalty”, but her comments on the airline’s commitment to Shannon will have been music to the ears of many.

Ms Boda, senior vice president Asia, Canada, Europe and Cargo with American Airlines - currently merging with US Airways - opened her address to the lunch in the Radisson Blu Hotel last week by reiterating the airline’s commitment to bringing transatlantic traffic to the region, through the service to its Philadelphia hub, which itself handled in excess of 30 million passengers in 2013.

The airline, through the merger with US Airways, already operates daily services from Shannon to Philadelphia in the summer season - from May to mid-October - and recently increased capacity by some 58%, which was required to meet growing demand on the route.

Ms Boda said the Shannon market was “very, very important to us”.

“It is one of our strongest seasonal markets that we have and we are very, very happy with our performance here. We appreciate all of your support for this market as well,” she said.

“I think when you look at what is next for Shannon and what is next for American Airlines in Shannon, the typical steps that we would follow is really to extend the season on the front and the back end by a month, or two months, or three months, something of that nature. And kind of test the waters, see how it goes.

“That would probably be our next step in looking at what is next for Shannon. Those typically do develop into year round service. So that is probably our next step that we would do, likely.”

Ms Boda also suggested that the planes coming into Shannon may form part of American’s general ongoing fleet overhaul, which could in turn increase capacity on the Shannon route.

“The other thing that we could do, that we are also looking at - and I mentioned that we have got a big fleet renewal programme going on, is to look at upgauging the existing aircraft, and bringing more seats into this market,” she explained.

“Sometimes it is not always about the number of flights, but if you can bring more seats in on that particular flight, we can potentially increase our traffic significantly by doing that.

“So, that would be another opportunity for us; we are certainly we are always looking at these things, they are on our radar screen at all times, and having these new aircraft come into our fleet, gives us much more opportunity to make this a reality here.”

Ms Boda was joined on stage at the event by Shannon Group CEO, Neil Pakey, and Niall Gibbons, CEO of Tourism Ireland, who delivered an upbeat assessment of Ireland’s growing tourism numbers, and said the body - which markets Ireland overseas - was “undertaking an extensive programme of promotions around the world this year, to build on the success of 2014 and continue to grow overseas visitor numbers to Limerick and the Mid-West”.

“We are working closely with our tourism partners in the Mid-West – and particularly with Shannon Airport - to promote and drive demand for vital air routes,” he said, noting that priority markets were Great Britain, the US, Germany and France, but that the body was also promoting the region in 18 other markets across the world.

Speaking to the Limerick Leader after the event, Mr Gibbons said that City of Culture had been “a major benefit to Limerick”.

“The other part of the brand is the delivery on the ground, for people here, people felt more proud of their city, something to rally around and engage around. People have reflected back and said, yes, we got a bounce out of this, we got a commercial and social bounce.”

Tourism Ireland last week broadly welcomed news that the Government had decided to sell off its stake in Aer Lingus to IAG and its CEO said he thought the move “a good one, there is detail to be worked through that Tourism Ireland won’t have a role in, but I think connectivity is just critical. Aer Lingus has a very strong future within the IAG group”.

“There is an absolute direct correlation between air access and tourism performance. You have seen over the last couple of years, the increases in air access at Shannon Airport, has had a direct link into the performance of the region from a tourism perspective.

“The bottom line is that region here has an international airport, has capacity coming in from all our main markets. We feel that there is still very good capacity to grow additional air access.

“I think the region is well positioned and there is a general upturn which is happening which is good,” he added.