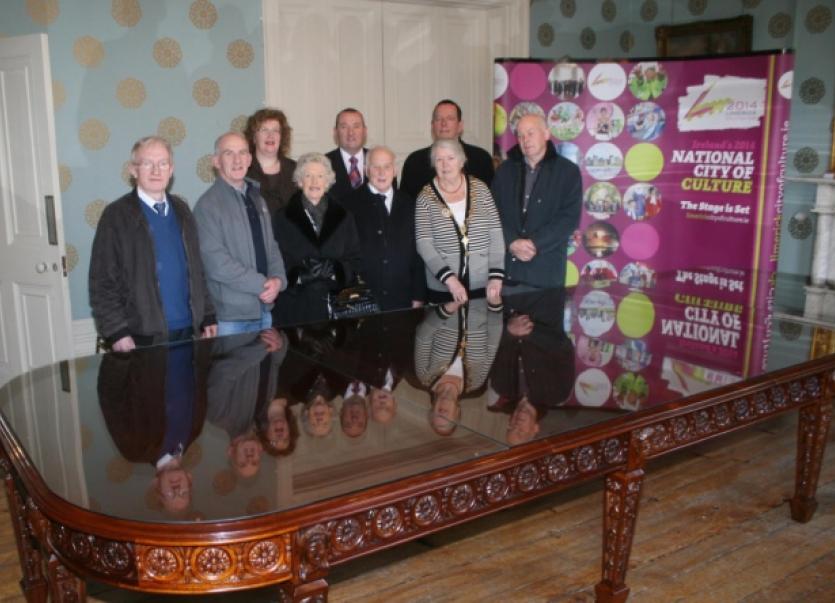 THE year was 1978 and city manager Tomas MacDiarmada wanted a new conference table around which he and the 17 members of the City Council could hold meetings.

THE year was 1978 and city manager Tomas MacDiarmada wanted a new conference table around which he and the 17 members of the City Council could hold meetings.

A tendering process was entered into and aborted before the manager’s attention was drawn to a workman in the employ of the Corporation.

Jimmy Clancy, from St Francis’ Abbey on King’s Island, spent most of the week in the Strand workshop, fashioning windows and doors for corporation houses. But there was more to this humble carpenter than met the eye.

“After I served my apprenticeship as a carpenter and a joiner, I took a particular interest in period furniture and in historic buildings. I was largely self-taught, I taught myself how to do the carving,” said Jimmy, who recently turned 77.

It was Tom Barnes, the corporation vet, who recommended the manager should put his trust in Jimmy Clancy. After all, didn’t the same man make his own dining room table?

“It [Mr Barnes’ table] was elliptical with carved legs and carved rails. It was made in the French empire style and Tom was thrilled with it. He got the manager to have a look at it and it was after that Tomas MacDiarmada approached me about the conference table.”

But Jimmy told the manager he had a few conditions of his own.

“I wanted a complete free hand. One of the conditions I asked for was that I wanted no assistance. Tomas MacDiarmada assured me I would have no interference from anybody. I started it in September 1978 and finished on the week ending April 24, 1979. I left the Corporation that very same day and went to Fas as an instructor in carpentry and joinery and I stayed there for the next 23 years.”

So Jimmy was no longer there when the ceremonial mace were laid abreast his table for its inaugural meeting at the Town Hall on Rutland Street in 1979. He would never have seen the more volatile members of the council bring their fists crashing down on his handiwork. And he was long gone by the time the table was moved – along with the council – first to Sarsfield House and then to Merchant’s Quay, where it was taken apart and consigned to a basement.

It was Cllr Maria Byrne – whose father Bobby would have chaired council meetings around Jimmy’s table – who set the restoration in motion after she came across the damaged table in the basement, a filing cabinet thrown across it.

Others involved were Pat Dowling, director of service, and Padraig Power, head of facilities at Limerick City Council, who also just happens to be one of the hundreds of young Limerick men who took carpentry courses with Jimmy at Anco and then Fas.

“It was reassembled and restored with the help of two expert craftsmen in Jimmy Ryan [Ballyneety], who repaired it, and Willie Hartnett [Newcastle West], who put on over 20 coats of French polish. All that remained was to find a use for it,” said Padraig.

Limerick City Council had just purchased Number 2 Pery Square, formerly the Georgian House, and the building is being used by the Limerick City of Culture 2014 committee.

So Jimmy’s table is now being put back to its original use – for board meetings for those planning the programme of events next year.

“We thought it would be very appropriate. It is more a piece of art than a piece of furniture and we are delighted Jimmy is around to see it restored to its former glory,” said Padraig.

And a work of art it most certainly is, made of “the best hardwood money could buy”, the importation of which into Foynes was personally overseen by the carpenter. “It is made in Brazilian mahogany after the style of Robert Adam, the 18th century architect,” explained Jimmy, going on to point out the guilloches and rosettes he carved 35 years ago and explaining the difference between a cyma-recta and a cocked bead.

The table also features 12 mysterious carved human figures – six men and six women. Jimmy is aware of the Italian masters who managed to fit unflattering portraits of cardinals and popes who crossed them into the detail of their work in St Peter’s.

“When a cardinal got on to Michaelangelo about the nude figures in the Sistine Chapel, he actually put the cardinal’s portrait down with the devil. Your man brought it to the Pope to complain Michaelangelo and the Pope told him ‘Out of hell there is no redemption’.”

But the wood carvings on the conference table represent no former members of Limerick City Council, Jimmy said.

“I was reminded of a few people while I was doing it alright. But they would have been some old-timers I would have known down around St Francis Abbey.”

Those old-timers have been lovingly restored for the year of culture and hopefully beyond. This time Limerick City Council won’t be so careless with Jimmy’s work. They have just insured the table for between €40,000 and €50,000.