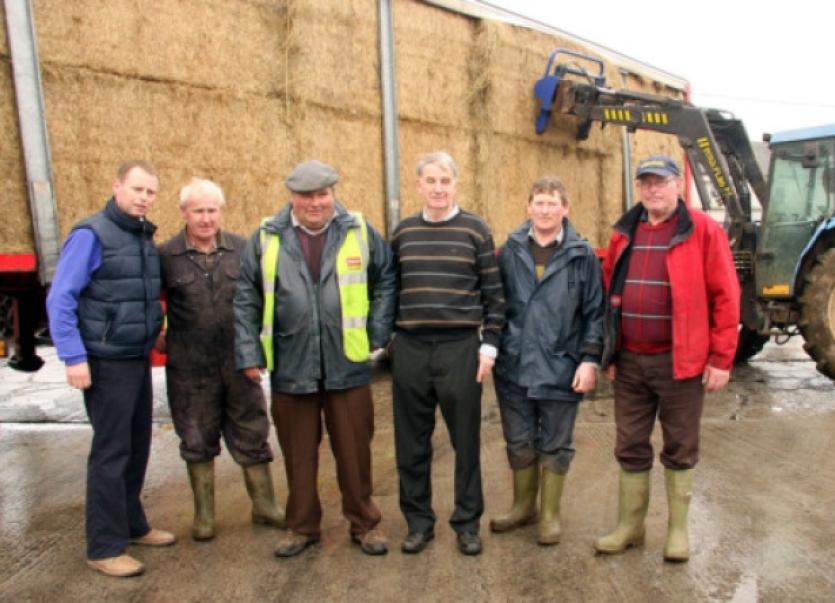 DAIRYGOLD are bringing in 180 truck loads of hay into the country, with more to come, to support farmers in the fodder crisis.

DAIRYGOLD are bringing in 180 truck loads of hay into the country, with more to come, to support farmers in the fodder crisis.

Judging by the scene in Dairygold’s co-op store in Cappamore on Monday morning every wisp of hay is needed.

Farmers queued up around the corner to get a square bale of English hay which Dairygold are selling at cost price of €150. It has to be the first time that hay from abroad has been brought into Ireland. As one farmer said, it should be like trying to sell ice to the eskimos.

Twenty bales came in and Sean Ryan, Dairygold area sales manager, said they could have sold 400.

“It was manic with all the phone calls from farmers looking for fodder. It is unprecedented. The mental and financial pressure out there is at breaking point,” said Mr Ryan, who adds that they are hoping to get more at their Cappamore store.

“It is excellent hay. You can’t get that kind of quality here,” said Mr Ryan.

Suckler farmer, Mike Healy, from Crehane, Cappamore said he had never seen anything like this. Eddie Franklin, from Bilboa, got the first bale of hay taken off the load.

“I’m collecting a bale for my neighbour. There is nothing out there,” said Mr Franklin.

Paddy Ryan “Luke” said he never thought he would see the day when Ireland would have to import fodder.

“People are desperate. They will pay anything, it’s a necessity. The financial costs are huge.

“It will take months if not years to get over this. Some are in an awful state,” said Mr Ryan.

He said that in some cases he had been made aware of, the issue was now humanitarian in nature and that he was in no way exaggerating the scale of the problem.

“I’ve been told by farmers that because of the conditions that have existed up to now that in some places there are now serious concerns for animal welfare which needed to be addressed by Government through a fodder scheme. The stress and worry that farmers are under needs to be relieved and that is why I am appealing for intervention,” said Deputy O’Donovan.

Deputy Niall Collins said the Government’s actions are a case of “too little too late”.

“The response has been totally inadequate to address the size and scale of the problem. Éamon Ó Cuív raised this six weeks ago in the Dail. The Government has been sleepwalking through the crisis,” said Mr Collins.

“As well as farmers’ livelihoods being at stake there are also animal welfare issues and much more serious consequences.

“Unfortunately we have learned that some farmers couldn’t handle the problem and have taken their own lives,” added Deputy Collins.

The bottom line says Eamon English, Limerick IFA vice-chairman, is “unless you get your problem out there nobody can help you”.