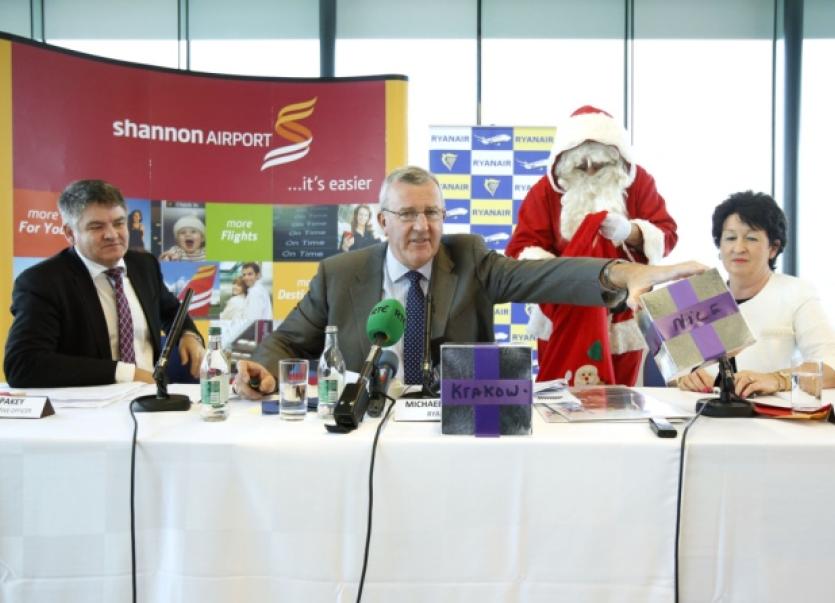 RYANAIR will almost double its traffic at Shannon from April 2014 with the effective abolition of the air travel tax.

RYANAIR will almost double its traffic at Shannon from April 2014 with the effective abolition of the air travel tax.

Shannon will be reconnected with the French and German capitals with Paris and Berlin among eight new routes to continental Europe that will see the airline’s total passengers at Shannon grow from 450,000 to 750,000 over a full year. The other routes are Munich, Nice, Warsaw, Krakow, Faro and Fuertaventura. The new business would probably require an additional aircraft at Shannon and most of the routes, apart from the sun destinations, were likely to be year-round, Ryanair deputy chief executive Michael Cawley said.

With 300,000 additional passengers on the way, it means that Shannon is getting almost one third of the extra million passengers the airline said it would deliver at Irish airports with the reduction to zero by Minister Michael Noonan of the airport departure tax. The announcement could see an increase in the order of 15% in Shannon’s total numbers over a full year.

Mr Cawley did not disclose the duration of the deal with the now independent airport other than to say Ryanair had committed to Shannon “for a good number of years”. Nor would he discuss what bargain had been struck on airport charges.

“It would be rude to talk about confidential discussions and if there’s one thing we are not in Ryanair it’s rude - or at least we are becoming less rude,” he joked.

He also praised Minister Noonan for effectively scrapping the tax.

“What Michael Noonan did in the Budget was he gave a massive stimulation to tourism which is going to be even bigger than The Gathering in our view, good and all as The Gathering was.

We believe that the 350,000 tourists that The Gathering is reported to have brought in will be significantly surpassed by this initiative only just with Ryanair’s response and we look forward to the response of the other airlines in due course,” he said.

“We should all learn from history and one of the key lessons we should learn from this is that we should never introduce a tax on tourism or on air travel generally again.”

“We were in recovery mode and we are now in growth mode as I see it,” said the chairman.