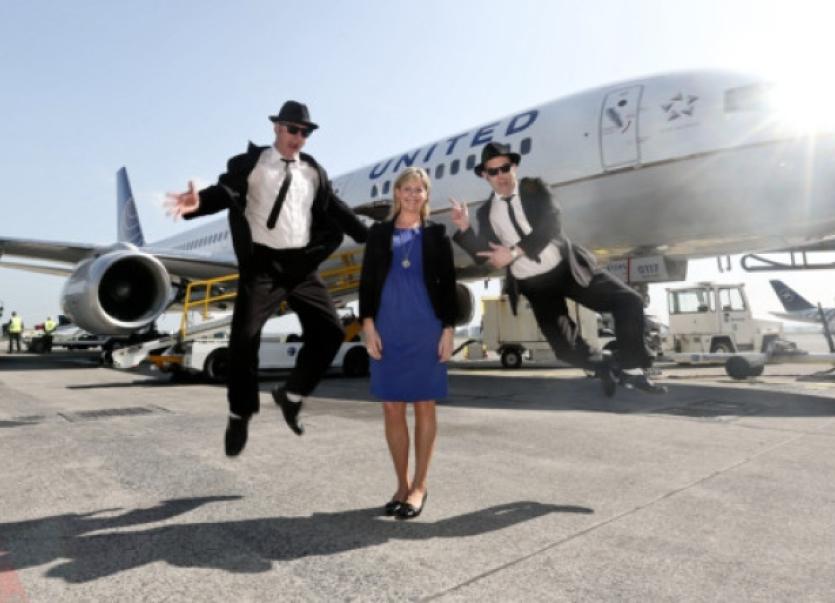 SHANNON’S link to one of the world’s busiest hubs has been restored for the summer with flights to Chicago with United Airlines five times a week.

SHANNON’S link to one of the world’s busiest hubs has been restored for the summer with flights to Chicago with United Airlines five times a week.

With a large Irish population concentrated in Chicago and the Mid-West, it is hoped the seasonal service will boost efforts to bring Irish-Americans back to the old sod as part of The Gathering 2013.

And with over 125 onward connections out of O’Hare International, outbound business and leisure travellers have plenty of choice between now and August 27.

Following its merger with Continental, United already serves Newark from Shannon. And its new route re-establishes a connection to Chicago Shannon last had in 2009, when Aer Lingus discontinued its service. It is anticipated that up to 20,000 people could use the route this summer.

“We are delighted to welcome United Airlines today with this service, which is a huge boost to the tens of thousands annually who travel between the west of Ireland and Chicago,” commented Shannon Airport Authority chairman Rose Hynes.

“These passengers can now avoid unnecessary transit times by flying directly into and out of the region itself through Shannon Airport. Outbound passengers will also have the advantage of clearing Customs and Border Protection services at Shannon, which will also save them significant time on arrival in the US. No other country in Europe has an airport with this facility.”

James Mueller, vie-president Atlantic and Pacific sales with United, said: “having operated our Shannon-New York/Newark service successfully for 15 years, this new route will further benefit our customers in Ireland, offering faster access to one of the United States’ most popular business and tourism destinations as well as increased travel options throughout the Americas”.

Tourism Ireland has pledged to support the new route and has already started a marketing drive focused on Shannon. It is running ads in Red Eye, a daily newspaper in Chicago with a circulation of 180,000. And this follows a round of TV and radio interviews by Tourism Ireland bosses promoting Shannon, Limerick and the west.

The attractions of Chicago for the Irish visitor are well-known. One of America’s great cities, it rivals new York as a shopping destination; is home to the electric blues, the pizza pie and some of the USA’s most daring architecture.

The flight departs Shannon daily (except Wednesday and Thursday) at 11am, arriving in Chicago at 1.05pm the same day. The return flight leaves Chicago every day except Tuesday and Wednesday at 6.05pm, arriving in Shannon at 7:35am the following day. The non-stop flight takes just over eight hours to the States and while passengers on the return leg can get home half and hour faster.

Ms Hynes said the new management team at Shannon had identified a service to Alicante as a priority and Ryanair has obliged with a seasonal service which commenced last Thursday with a fully-loaded flight to the Costa Blanca.

“Alicante and the neighbouring Murcia region are among the most popular European sun holiday destinations for passengers from this region. We are delighted that Ryanair, which this summer is flying to 10 destinations from Shannon, has added the service to its schedule and have no doubt about its continued success, “ said Ms Hynes.