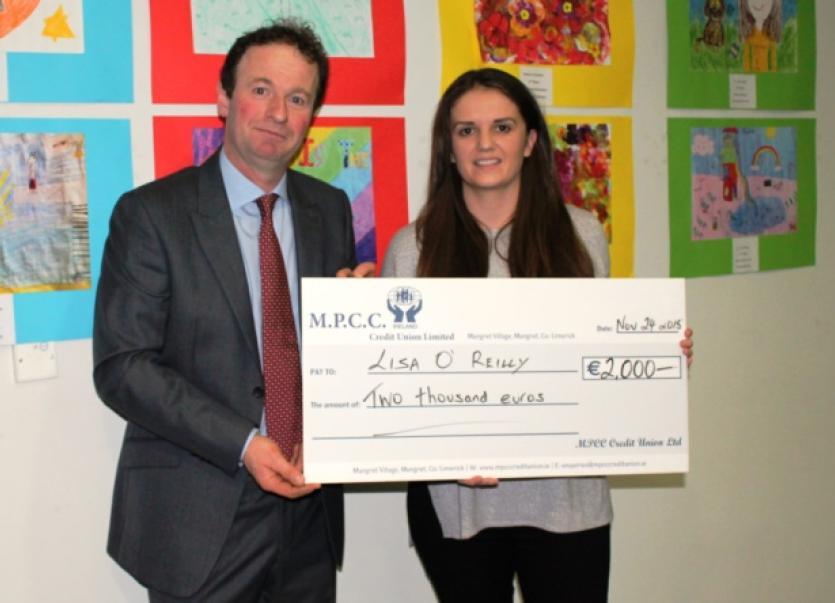 Lisa O’Reilly from Ballykeeffe has been selected as the winner of the MPCC Credit Union bursary for 2015.

Lisa O’Reilly from Ballykeeffe has been selected as the winner of the MPCC Credit Union bursary for 2015.

The award offers a third level education bursary of €2,000 per annum for up to four years.

Lisa is a former pupil of Salesian College, Pallaskenry and is currently studying in University of Limerick. She is actively involved in her community as a Garda Reserve in Community Policing and also helps out with the Limerick Free Dinners Project.

As well as being active in her local community, Lisa has also volunteered in Africa and spent six months out there working with children in need.

She has previously been acknowledged for her volunteer work when she was a finalist in the Pramerica Spirit of Community Awards.

Dave Noble, youth officer with MPCC Credit Union, said: “Having seen all of this year’s applications it was very heartening to see the efforts that our younger members are making to improve the communities in which they live.

“The calibre of applicant was exceptional and the judging panel had a very difficult time selecting a winner”.

“MPCC Credit Union is a local community based organisation and hopefully the Bursary Award will encourage the credit union’s younger members to get actively involved in their community and improve the lives of others,” he added.

This award is not based on Leaving Certificate results and is awarded competitively on merit as determined by the MPCC Credit Union judging panel based on criteria which show the applicant’s efforts to actively participate in and improve their community or the lives of others.

The standard of applications was exceptionally high and the selection panel had a tough job but in the end Lisa was deemed the most worthy recipient. MPCC Credit Union serves Raheen, Dooradoyle, Gouldavoher, Mungret, Patrickswell, Clarina and Crecora.