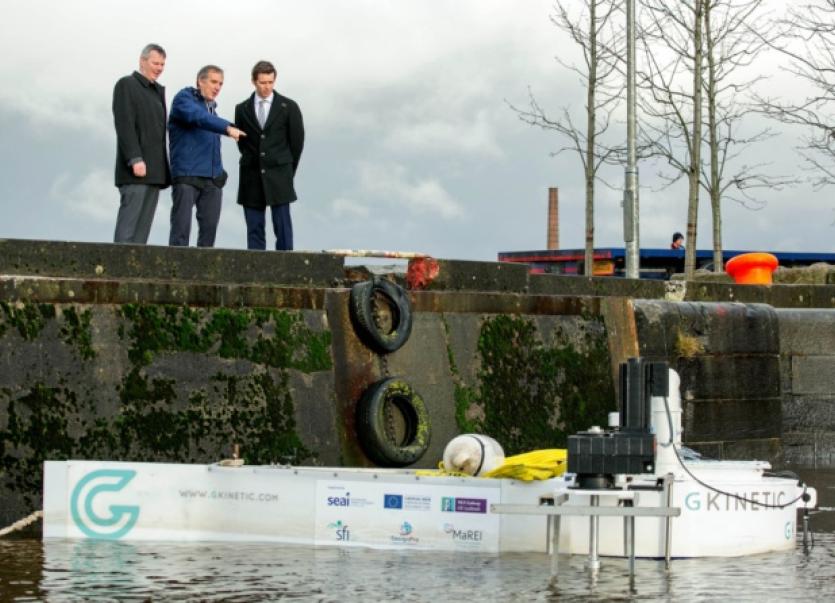 AN innovative new device, developed in West Limerick, which uses tidal energy to generate electricity has the potential to create up to 300 jobs locally in the coming years.

AN innovative new device, developed in West Limerick, which uses tidal energy to generate electricity has the potential to create up to 300 jobs locally in the coming years.

The OC1 device, developed by GKinetic Energy in Newcastle West was officially launched at Limerick docks this week, following months of rigorous testing.

According to Vincent McCormack, managing director of GKinetic Energy Ltd, there is major worldwide potential for such a system, with significant benefits for the local economy.

Speaking at the launch, he said: “Our vision is to build and deploy devices worldwide and today is a major benchmark in that plan as it marks the end of very positive trials that have further validated OC1 as a cutting edge hydrokinetic device with local and global market potential.

“The global market for hydrokinetic devices such as the GKinetic device is estimated at 150 to 200 GWh, yet only 5% of this market has currently been realised. This particular device is a river unit but our plan is to create large scale tidal units capable of generating up to 1 MW. Our goal is for the deployment of units on the Shannon Estuary with the potential to create up to 300 jobs from manufacturing to deployment and maintenance.”

The OC1 device was designed by Mr McCormack and built by Rathkeale-based engineering company DesignPro Ltd. It contains patented design components unique to hydrokinetics (the production of energy from the flow of moving water)

The pilot device is a 15KW river unit capable of powering small communities from natural river flow. However, commercial deployment will lead to larger units with energy outputs of up to 1Mwh (megawatt-hour).

“The success of the device is a result of excellent collaboration and support from SEAI, NUIG, MaREI, DesignPro and SFPC. Their optimism and encouragement has helped us along the way. This is a major milestone in the development of our technology,” said Mr McCormack.

Patrick Keating, chief executive of Shannon Foynes Port Company, commented: “One of our objectives in our masterplan Vision 2041 was to enhance current activity at Limerick Docks by developing significant marine research here.

“No other location in Ireland could have afforded GKinetic the opportunity to trial its unit in the way that Limerick Docks have and we are delighted to have played a role in supporting this really exciting local company. We look forward to its continued evolution into an international player in the emerging hydrokinetics market.”

Tests so far show that the device – already a winner of the SEAI Design Award at their Annual Awards in November - offers a potential Levelised Cost of Energy (LCOE) of €0.08 which is highly competitive against other available forms of energy.

The design is the first to exploit the natural phenomena that occurs when water accelerates around an obstacle, with research showing that the power available in this accelerated region to be eight-times that of the natural ambient flow. The compact design and size of the GKinetic device also means that it can operate in as little depth as 2m and a width of 3m, resulting in a huge number of sites that were previously not feasible for a turbine now having that option.

In addition to its cost-efficiency as an energy provider, OC1 addresses key deficiencies in existing technologies, such as deployment – a key strength of the GKinetic device, which allows for easy placement in rivers and sea – and maintenance challenges. The device also avoids environmental challenges associated with other renewable energy resources. Its commercial value is further enhance by a payback time potentially as low as three years.

The project has been part-funded by SEAI (the Sustainable Energy Authority of Ireland) and also has support from Marine Renewable Energy Ireland (MaREI), National University of Ireland Galway (NUIG) and Shannon Foynes Port Company.