Grandparents who moved Down Under still miss Limerick’s buzz 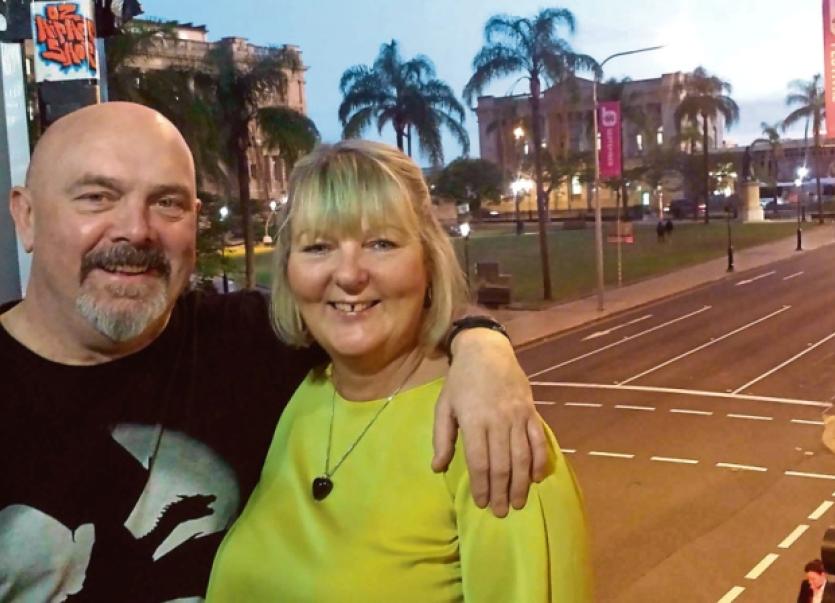 GRANDPARENTS who left Limerick nearly a year ago to be with their children and grand-children have spoken of how their lives have dramatically changed, but how life Down Under will never be like their home in Limerick.

GRANDPARENTS who left Limerick nearly a year ago to be with their children and grand-children have spoken of how their lives have dramatically changed, but how life Down Under will never be like their home in Limerick.

Janet and Eugene Bennis, from Granville Park in Limerick city, will feature this Monday night in a TV3 documentary focusing on emigration – and all that you can’t leave behind. The couple, who are in their late 50s, sold their home of more than 30 years to help finance the move and build a new life abroad.

In this poignant documentary, reporter Ciara Doherty followed the couple over the course of a year, as they prepared to make the move to emigrate to Australia to be with their four children and four grandchildren, all of whom emigrated during the recession.

The couple left Limerick for Brisbane on February 14 last to be reunited with their family. This will be the first Christmas in 12 years that the family will all be together for the festive day.

Speaking to the Limerick Leader in advance of the programme, Janet said their first 10 months of living abroad “seems like a couple of weeks”, and they have felt many highs and lows, some of which they didn’t expect.

“It has been truly fabulous. Waking up to sunshine everyday is such a boost. It lifts your mood, even when we are homesick. I just look around and I feel very blessed that we with our children and that we were able to make this move.

“We are only 40 minutes from either the Gold Coast or the Sunshine Coast, but in saying all that, I wouldn’t mind sitting in Nancy’s [bar] by one of the coal fires and having the craic. That’s what we both miss the most – the social part of our lives, or just going into town and bumping into friends; the sense of humour that we have.

“We miss our families in Ireland, our friends, friends we have had for over 40 years. We will never have those friendships again, which is quite sad, but I look at our grand daughters every day and it’s a small sacrifice that we paid to be here with them and watch them grow.

“Our friends and family in Ireland are all very special to us, and nothing will ever change that. Sometimes Eugene would love just to be going down to the Square Bar and having the banter about the soccer, rugby, etc.”

Among the highlights, Janet said, was being here for everyone’s birthdays, watching their grandchildren grow, especially witnessing their grand-daughter Alexia, who was only nine months old when they arrived, her take her first steps and call her Nana.

In terms of their social scene in Brisbane, Janet said they are “too old for the city pubs, but too young to be going to the bowls”.

“We do play bowls and we have a few drinks, but its just not the same as home - that’s the up and downs of being 16,000 km away. We miss our old lives, but we have to move on from it. I didn’t think it would be as hard as it has been.

“I suppose I thought ‘Sure, they speak the same language, drive on the same side of road, how hard can it be?’ We are just starting to embrace our new lives, and settle down to life Down Under.”

Janet said she would recommend this move for others suffering from empty nest syndrome, but warns it’s wasn’t “all plain sailing”.

“It has its ups and downs. It will never be like home, but it’s now our home and we have to adjust to that, it might take a while, but we’re getting there.”

In Brisbane, Janet and Eugene have moved in with their son Eoin, his partner Hari, their two children Isabelle and Alexia, and their daughter Claire and her partner Sok. Eoin and Hari are also expecting their third child early next year.

“It’s a big house so we aren’t on top of each other 24-7. They bought the house between them as an investment. We would love our own little place, but there is no point until our permanent visas have been issued, which hopefully will be next May. In the meantime, we are minding two of our gorgeous grand-daughters. We can’t work until we get our visas, which is a pain. Sometimes I think should we have waited in Ireland until they were issued, but then we would have missed out on being here and bonding with our four gorgeous grand-daughters. My only advise to any parent or grand parent thinking about emigrating to here, is wait until you get here before you put in your application as you can then go on a bridging visa, which lets you work for 20 hours a week, but because we applied offshore, we can’t avail of it.”

Unlike last year in Limerick, Christmas this year will be spent surrounded by up to 20 family members and their friends and relations.

The couple have joined lots of groups since they arrived, to help integrate with local life. They both play bowls on Sundays, Janet is volunteering with Pieta House and the Darkness into Light campaign, to combat suicide and raise awareness of mental health issues, and Eugene has joined a Men’s Shed group, which she praised as “a fantastic organisation to keep men who have retired or for the reasons can no longer work, active in body and mind.”

In the documentary, an emotional Eugene said he believes that it is unlikely that they’ll ever travel to Ireland again.

“It’s not that I don’t want to, but the journey itself is pretty long and as you get older it doesn’t get easier, you know. I don’t know. I would never say never, but I would never come back to live. But even the thoughts of coming back for a holiday, I don’t think so.”

Janet, who worked in the Allegro cafe at the University of Limerick, said prior to their big move that she found it very hard to go home to an empty house after work. “It really was like a grieving process. You’d get up in the morning and do what you have to do but you’re just waiting for the Skype calls.

She said they lived every night and morning for their calls, and were so lonesome that it tore at their hearts “constantly”.

Eugene had not worked since the closure of Dell some years ago, but hopes to return to work again.

The documentary, Leaving Ireland for Good, airs this coming Monday, December 21, at 10pm on TV3