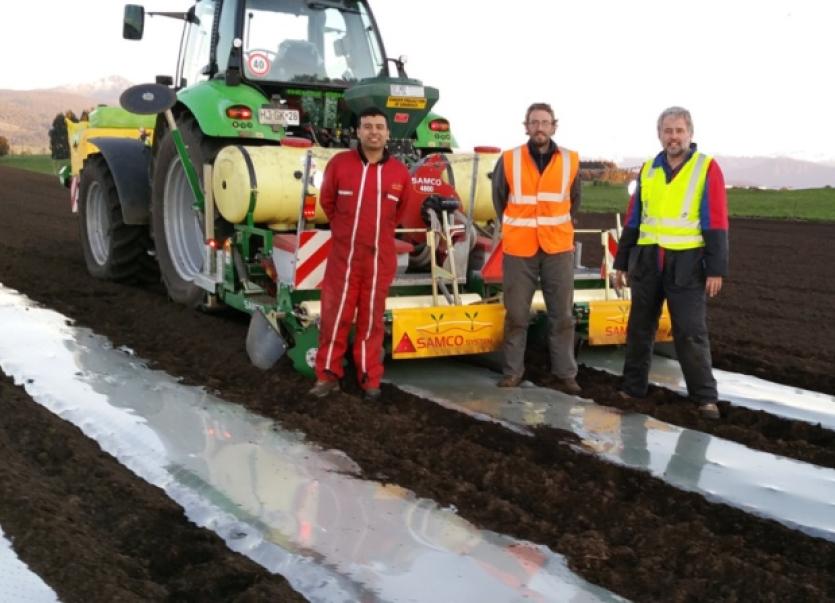 A LIMERICK agricultural success story that started in Adare has spread as far away as New Zealand, Inner Mongolia and now Chile.

A LIMERICK agricultural success story that started in Adare has spread as far away as New Zealand, Inner Mongolia and now Chile.

Matthew Shine is just back from the tip of South America where he was sowing maize in the shadow of the Osorno volcano using the Samco System.

There are now six drills working in Chile and this is set to increase dramatically by 2017.

Valerie Shine said they expect the turnover over the next three years to be in the region of €400,000 from Chile alone.

The family run business was founded by Samuel Shine in 1997. He invented and patented the Samco 3-in-1 machine that guarantee farmers a crop of quality forage maize in a cool, less than favourable climate for maize corn growing.

It sows the seed, sprays a pre-emergence herbicide on the soil and lays a thin layer of degradable mulch film over the soil, increasing air and ground temperature and protecting the young seedling from adverse weather and late frosts.

Matthew said Chile is now set to become a strong export market for Samco, similar to their already thriving New Zealand market. “Crucially, now the system has proven its ability to work across the globe in a variety of climatic conditions, which is boosting the company’s growth in international markets.

“Being able to develop the system in these new emerging markets with opposite seasons to Ireland will strengthen the company’s position on the world market and will allow production from the home base in Adare to continue all year round to suit the growing demand,” said Matthew.

Some of the drills in Chile are working in a pioneer maize seed production centre.

“It is now clear that the tangible benefits of Samco’s technology is now being seen worldwide.

“It is a positive place to be with the Irish agricultural sector currently being the backbone of the economy,” said Matthew.

Last year they secured a purchase agreement in Inner Mongolia, Northern China with the first order amounting to €500,000.