US Ambassador says Limerick has its ‘swagger back’ 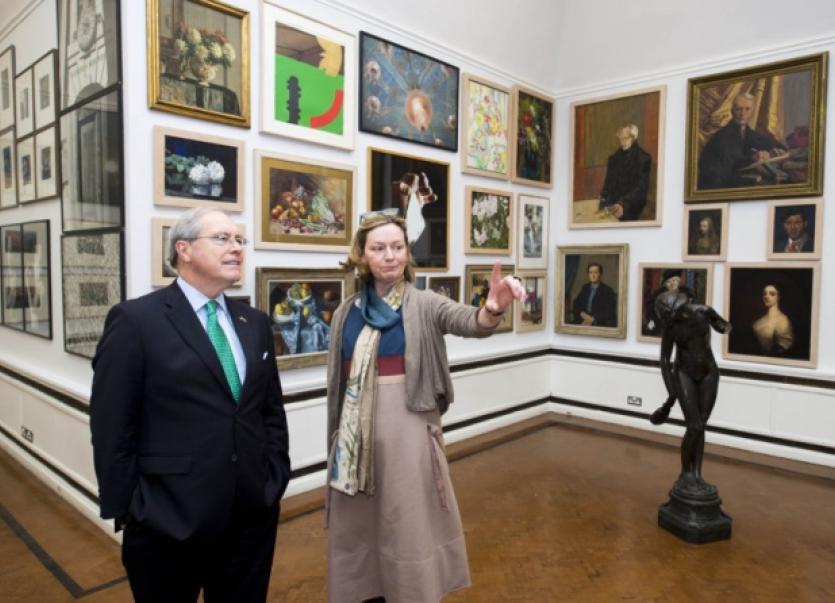 HEAVY hitters from the world of international business with Irish connections visited Limerick to hear about plans for its future as part of a regional event of the Global Irish Economic Forum.

HEAVY hitters from the world of international business with Irish connections visited Limerick to hear about plans for its future as part of a regional event of the Global Irish Economic Forum.

The Limerick 360 event in the City Gallery of Art heard presentations from CEO of the City and County Council Conn Murray on the 2030 plan, Mike Fitzpatrick on the 2020 bid and from the heads of the third level institutions in the region.

A delegation, in Ireland for the Forum taking place in Dublin over the weekend, visited Limerick ahead of the event, and included business people from Intel and Microsoft and others working at high levels of business in America.

Economic growth in the city and wider region was discussed at the gallery event, which was preceded by a mayoral reception in City Hall, and followed by a visit to UL. Tim O’Connor chaired the event and said that it provided “a snapshot of a very exciting future building here, as a microcosm of Ireland”.

US Ambassador Kevin O’Malley, who has visited Limerick a number of times, said he was “really comforted to see that there is a little bit of a swagger back in the step here, there is a reasonable ability to take reasonable risks, which is what success is going to be all about.

“I like coming here because of what I see as the potential where this area can really go in the future. This whole area has so much going for it and as I said with the swagger that has developed and the confidence and an ability to take reasonable risks, I think that this could be a very bright future,” he said.

Silicon Valley based investor John Hartnett of SVG Partners, who is from Limerick, was among the group and said he was “very proud” that the Forum had extended to Limerick.

“A lot of what Limerick has to offer has to be seen and experienced and the group are hearing the plan that has been put in place and it is really important for people to hear that,” he said.

Mayor of the City and County, Cllr Liam Galvin, said the local authority was “delighted” to be hosting the regional event, in conjunction with the Department of Foreign Affairs, and welcoming members of the Global Irish Economic Forum on their visit to Limerick.

“This visit will be an exploration of Limerick’s ambition to develop and edge in business, social and physical regeneration, cultural richness and educational opportunity,” he said.

“It represents a valuable opportunity to showcase why Limerick is emerging as a leading investment location and attractive place to live in and visit,” he added.

Foreign minister Charlie Flanagan said the Forum had helped to deepen “our links with the global Irish and helping to restore our international reputation”.

“This year’s forum looks to our future prosperity and economic resilience. This regional event will offer a particularly good opportunity to showcase the Limerick region,” he said ahead of the Limerick event.