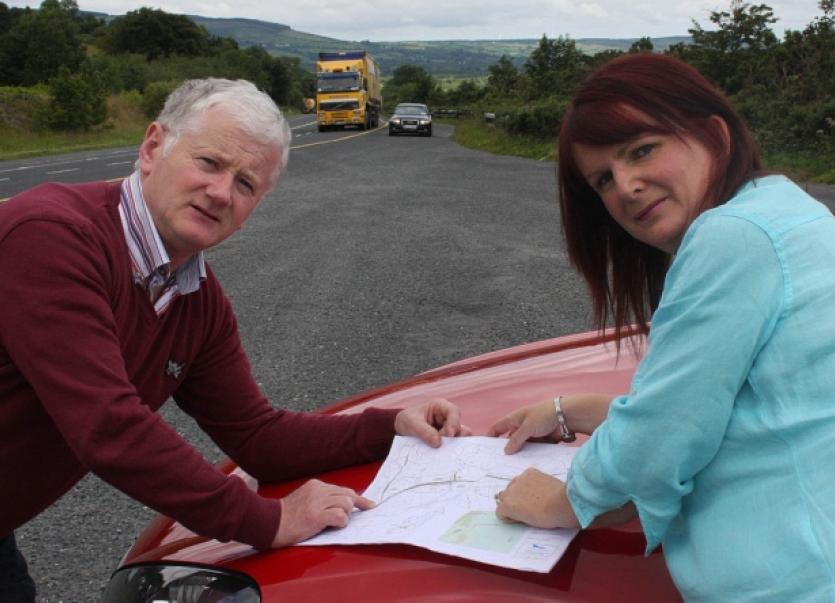 CAMPAIGNERS calling for the completion of a major road safety project in West Limerick fear that their cause will be “ignored” without renewed support.

CAMPAIGNERS calling for the completion of a major road safety project in West Limerick fear that their cause will be “ignored” without renewed support.

Residents and activists have made a fresh call for funding to be made available to complete a multi-million euro upgrade of the N21 between Newcastle West and Barnagh, a section of road that has claimed the lives of nine people in thirteen years, including five in 2010.

In March the first phase of the project, which saw a series of dangerous bends removed and just under 2km of new road built at a cost of €5.2 million, was completed. However due to funding restrictions the work was broken up into two stages.

The Barnagh N21 Road Action Group, which is made up of a number of local residents, are now calling for Limerick County Council and the NRA to complete the project, which will see the road upgraded all the way in as far as the Killarney pole on the outskirts of Newcastle West.

Siobhan Kelly, a member of the road action group, said that unless phase two is completed soon “it is inevitable that more serious accidents will occur and more lives could be lost”.

“As someone who uses this road every week I know how dangerous it can be. Our focus since this all started back day one is improving safety for road users. We’re back fighting again for the funding to complete phase two, Garryduff to the Killarney Pole. This section … is just as severe as the old road above it”, Ms Kelly said.

“Residents living on that stretch encounter problems and are taking their lives into their own hands everyday turning off into their homes. Many have been rear-ended in the middle of the road causing major pile-ups.”

Ms Kelly and fellow campaigners Mai Murphy, Seamus Collins and others are to make a presentation at a Newcastle West area meeting on December 4. The group, who are also running an online petition, are seeking to apply as much pressure as possible ahead of the allocation of the NRA’s capital grants for 2014, which are set to be announced in January.

Fine Gael TD Patrick O’Donovan said that he is “anxious” to see the NRA provide funding for phase two as soon as possible. “Obviously the worst part of it is done, but the second part is equally as important. In fairness, the NRA have stumped up already and they should be acknowledged for that. But I’m certainly anxious to impress on them the need to do that again.”

Newcastle West based Cllr Michael Collins of Fianna Fail said that phase two needs to be given fresh priority. “I think the NRA and the council have become complacent. I think there’s a view that ‘we’ve done phase one, that should keep them happy’. Phase two is as important as phase one, the council and the NRA need to give this priority. Nothing happened for years, and when they decided to give it priority, phase one was built. The pressure needs to come on now for them to deliver for West Limerick.”

Paul Crowe, director of transport services with Limerick County Council said that the project remains high on their list of priorities, but cautioned that there is “severe pressure” on NRA resources. “It really is down to the level of NRA funding, and then the matter of their national priorities. We’re aware that the Barnagh group are looking for phase two - the land is bought, the documents are ready. It remains a priority for us, but I know that the NRA are under severe pressure for funding.”