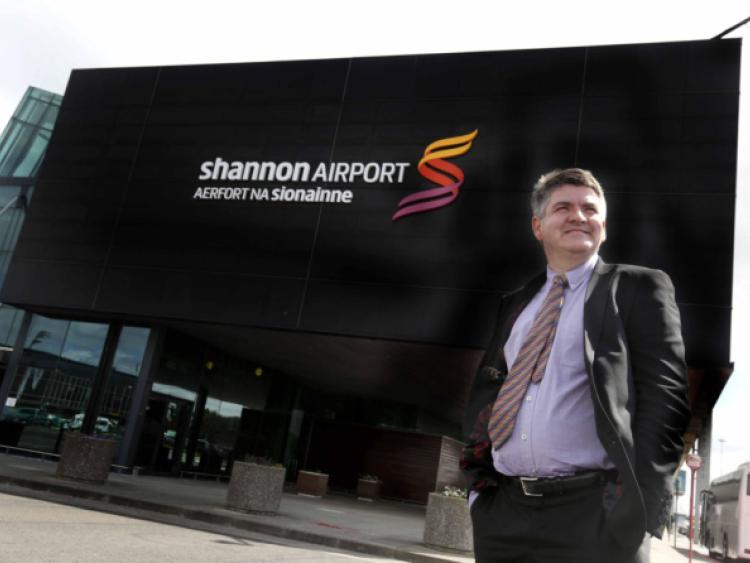 PASSENGER numbers at Shannon are expected to grow in 2013, the first annual increase in seven years, its CEO Neil Pakey has told a gathering of business leaders.

PASSENGER numbers at Shannon are expected to grow in 2013, the first annual increase in seven years, its CEO Neil Pakey has told a gathering of business leaders.

A sluggish start to the year is expected to be compensated for by a bumper summer, especially in the US market, and the overall picture should be one of marginal growth.

Mr Pakey told an autumn lunch hosted by Shannon Chamber at Dromoland that his focus had been on “stopping the rot” which had seen passenger numbers decline every year since 2006.

Separation of Shannon from the DAA had seen the airport begin to turn its fortunes around.

“The airport is now fully independent with its own board and is charting its own future and that makes my life so much easier when you have, if you like, less politics and more action,” Mr Pakey said.

“Passenger numbers are going in the right direction we are looking at growth for the year for the first time in many years. We have just had three successive months of growth on previous years so it is not a bad start on passenger number side.”

The Gathering 2013 had proven a success in bringing more Americans in particular back to the old country. And Mr Pakey spoke in support of efforts to bring tourists to the region next year to coincide with Limerick’s year as City of Culture and the millennium of the Battle of Clontarf.

A Scot, Mr Pakey said his homeland would be “going to town” on the 700th anniversary of Robert the Bruce’s victory over the English at the battle of Bannockburn and he felt Ireland and the Mid-West should make a similar effort in relation to Brian Boru.

Mr Pakey is also CEO designate of the Shannon Group Plc, which he sees as “four complementary businesses” comprising the airport; Shannon Heritage; Shannon Commercial Enterprises Ltd (managing the property portfolio of Shannon Development) and the International Aviation Services Centre (IASC) seeking to develop a world-class cluster of aviation and aeronautic businesses around the airport.

Key appointments in Mary Considine as company secretary of the Shannon Group and Patrick Edmond and managing director of IASC were confirmed last week.

Group chief financial and chief commercial officers are also being recruited as is a property director for Shannon Commercial Enterprises.

Altogether, it amounted to “an exciting time for Shannon”, Mr Pakey said, which he believed was “on the cusp of a new golden era of evolution”.