Adult club is a haven for Limerick ‘swingers’ 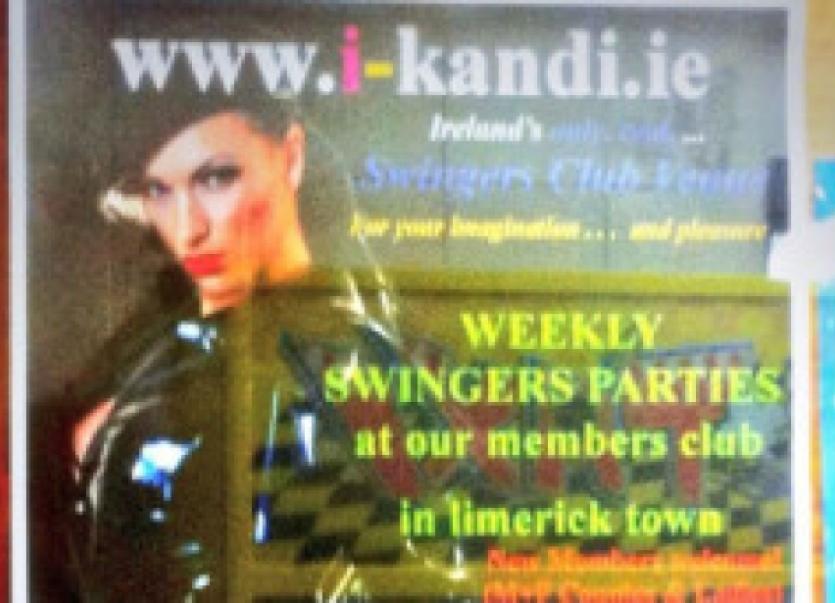 A SWINGERS’ club in Limerick city is hoping to tap into the success of the Lisdoonvarna Matchmaking Festival - a poster for the adult club is displayed in a chipper in the West Clare town.

A SWINGERS’ club in Limerick city is hoping to tap into the success of the Lisdoonvarna Matchmaking Festival - a poster for the adult club is displayed in a chipper in the West Clare town.

Advertising weekly swingers’ parties at the Eastway Business Park, Crossagalla, Limerick, the poster describes www.i-kandie.ie as being “Ireland’s only real swingers’ club venue, for your imagination and pleasure”.

When the Leader rang the mobile number advertised on the poster – under the guise of an interested punter – the man who answered explained that over 30 people enjoy the use of the facilities on any given night.

“It’s no more different than what happens in London - you have the Torture Garden and various clubs - essentially we do the same,” said the man.

“People ask us are we legal and all this kind of thing - people are a little bit naive. We are in business five years. We are a limited company. It is alternative adult events - that is what we do, essentially.”

While the majority of people taking part in the weekly swinging – or partner swapping – sessions are heterosexual couples, “there are a few singles,” he said.

“Essentially, we are a venue. We cater for a gay clientele as well. It’s almost weekly now. The gay side of it is pay as you go, it’s completely separate. The swingers’ club is essentially run as a club - you join it.”

The facilities, he described as “pretty good” and include “a very nice sauna, tv lounge with movies, and a reception area with an open fire where people can meet and chat”.

“We don’t have a wine licence at the moment so you bring your own. The bottles are cooled and refrigerated in the lounge - you help yourself to what you want.”

“Typically people arrive at 12 and it runs until around five in the morning. People socialise. Everyone is there for the same thing - they are curious about swinging.”

According to the man, there are different areas in the club where people can avail of various facilities.

“Some people decide they will go in the sauna - we provide all the toiletries as well. We play a few games - ice-breakers,” he said.

“You can come along and enjoy the atmosphere as a voyeur, you don’t have to do anything. It’s very easy going and always well staffed. It’s quite liberating.”

The club which generally meets on a Saturday night includes a mix of regulars and new people. “It’s an opportunity to get dressed up a little bit more risqué and wilder than you would in a normal club. You see everything - latex and rubber. Women especially enjoy the dressing up and the admiration side of it.

“There are a variety of options - some people are exhibitionist in nature, they like to perform, voyeurs like to watch and other people like privacy. It’s essentially an adult’s playground - that’s the best way of describing it. There is a sex swing there, people like to try these things but there is no ‘have to’. We have a dance pole and music. We do a spin the bottle routine.”

Newcomers to the club, he said, fill out a contact form including their name and contact information.

“We understand that newer clients might be suspect about giving out their details. We are in business five years. We have never had any issues with regard to privacy issues or indeed any issue whatsoever. We take great care in relation to who we leave in.”

Regular updates on meetings are circulated via text messages.

“We text all our people to let them know. If you are interested, you text your name, for example: ‘John and Mary will attend’.”

The majority of the people attending the club, he said, are aged from 35 up to their mid-50s.

“It’s generally €30 per couple if you book it. There are options - you can pay at the door which works out at €50 per couple or you can pay by Visa through your Smartphone.”

“We are very careful that nobody ever feels pressured and we are quite proud of the fact that we have quite a lot of female members.”