Call for axed Limerick street ambassador scheme to be reinstated 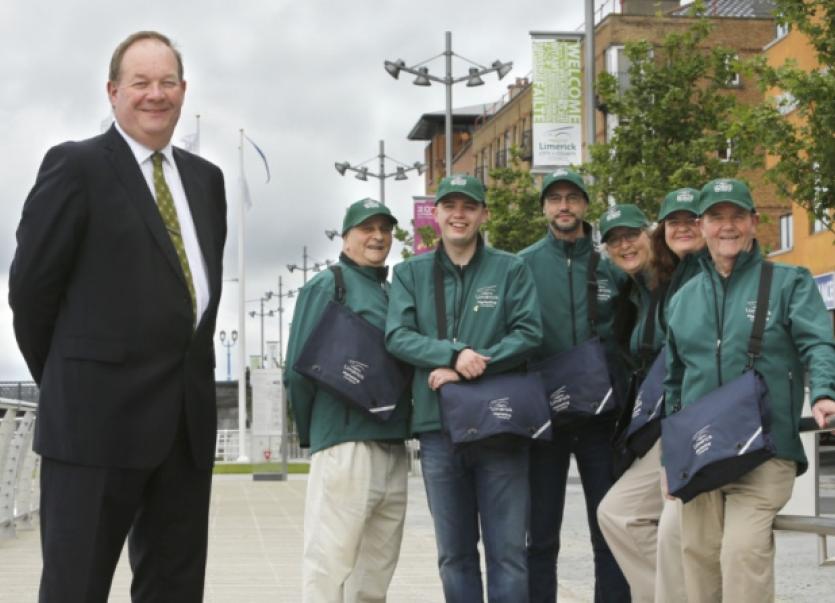 LIMERICK city councillors have called on the council to reinstate the Street Ambassadors project which was cut this year.

LIMERICK city councillors have called on the council to reinstate the Street Ambassadors project which was cut this year.

This comes after Labour councillor Frankie Daly brought a motion forward to the Metropolitan District meeting to bring back the “highly successful and worthwhile” programme to help grow tourism in the city.

Cllr Daly said he believed that the programme was an “easy target” to cut, and that he hopes to bring back the programme through the General Municipal Allocation [GMA] funding next year, if it remains cut.

“We are a public authority. We are answerable to the people and we need to connect with people. The thing with the Street Ambassadors was they dealt with tourists on a one-to-one level, and they espoused Limerick’s City of Culture.

“They worked hard to create a very positive image of Limerick to tourists that would be visiting from different parts of the world,” he said, adding that since it was announced that the project was to be axed, he has met with council officials and those involved in the initiative, the cost of which he described as “minimal”, at between €20,000 to €30,000 per year.

“The little bits of beauty that we have, it’s good to have guys promoting these, and I think it feeds back into the economy,” Cllr Daly said.

“One or two of them were going through college. I spoke to one guy in particular and I got a real sense of something that was so cost-effective – talk about bang for your buck. It was a personal touch.

“And one of the main gripes that I have is that we are moving away from the public. Everything seems to be moving towards online this, online that, like with the motor tax online, and comments about putting things on WiFi. They’re great but you can’t beat the human touch,” he said. He added that the Street Ambassadors were part of rebuilding the “half-derelict” city. Councillors from other parties supported Cllr Daly’s motion, and urged the council to bring back the programme, which was originally cut due to a lack of “administrative resources”.

Fianna Fáil’s James Collins urged the council to “get them on the streets as soon as possible”.

Cllr Séighin Ó’Ceallaigh said if they want to seriously consider the European Capital of Culture bid, the council “must be prepared”.

“I have worked in the city centre for a while, and there have been tourists around every single time of the year. The Street Ambassadors were around, especially during the year of the City of Culture, and were there to give the tourists a hand,” he said.

His party colleague Maurice Quinlivan agreed, saying: “This was an innovative job in the city that worked really well. It was worth well more than the money that it was costing [the council].”

Labour councillor Joe Leddin commented on the marketing of city events, such as the World Rugby 7s tournament in August, saying that there has been “insufficient” signage around the city.

A council spokesperson said: “For resource issues it wasn’t run in 2015 but the restoration of the Limerick Street Ambassadors programme is under review for future years,.”

Cllr Daly said he is hopeful that the initiative will return to the city, adding that the ambassadors did “great work” for the city.

“We can have all these great strategies and have them down on paper, and they can be great plans, but great plans need great people.

“They thought they could just drop this initiative, something that was going for nine years,” he concluded.