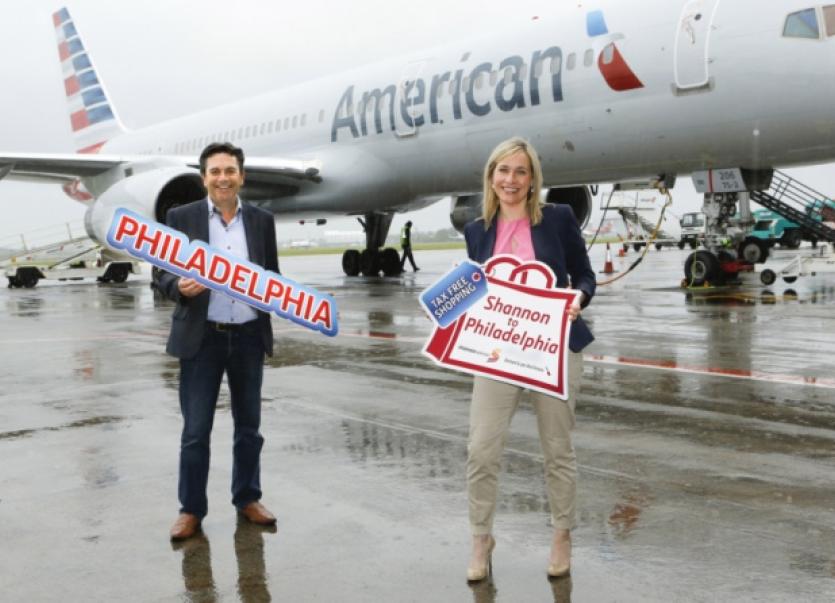 AMERICAN Airlines has returned to Shannon for the summer with a 58% increase in capacity on its Philadelphia route.

AMERICAN Airlines has returned to Shannon for the summer with a 58% increase in capacity on its Philadelphia route.

The daily summer service has been operating at Shannon since 2013 under the banner of US Airways. And that airline’s merger with American Airlines - creating the world’s single biggest airline in the process - has seen the return of the American Airlines flag to the runway at Shannon for the first time in eight years.

Services recommenced last week and will continue until mid-October. The extra capacity was required to meet growing demand on the route, according to the airport.

Welcoming the return of the American Airlines flag, head of aviation development at Shannon Airport Declan Power said: “The summer season is getting into full swing as we also welcome the return of Delta Air Lines daily service to New York last weekend.

“This year we are also celebrating the 70th anniversary of the first commercial transatlantic flight to Ireland which was operated by American Overseas Airlines, which was a forerunner to American Airlines, so the timing could not have been better.

“At a practical level, we will have 114 additional flights between Shannon and Philadelphia this year and this will generate a lot more American tourists, which is further proof of the market demand for Shannon as a gateway to Ireland and the Wild Atlantic Way.

“There is also a strong outbound demand for the service, not least given the huge volume of onward connections from Philadelphia, which is an American Airlines hub.

“Philadelphia, in its own right, is a very popular destination for tourism given its historical significance in the US and it also has a very strong Irish community so we are very confident about this service,” Mr Power said.

The return of American Airlines comes days after the parent Shannon Group published accounts showing earnings before tax at Shannon Airport rose by €4.6 million in 2014, an increase of 34%.

Shannon flying it on transatlantic: Big rebound in US traffic

ADDITIONAL seats between Shannon and Philadelphia should further boost transatlantic traffic in 2015.

As well as American Airlines’ Philadelphia route, there are also services this summer with Delta to New York JFK, with United to Chicago and Newark and with Aer Lingus to Boston and New York JFK.