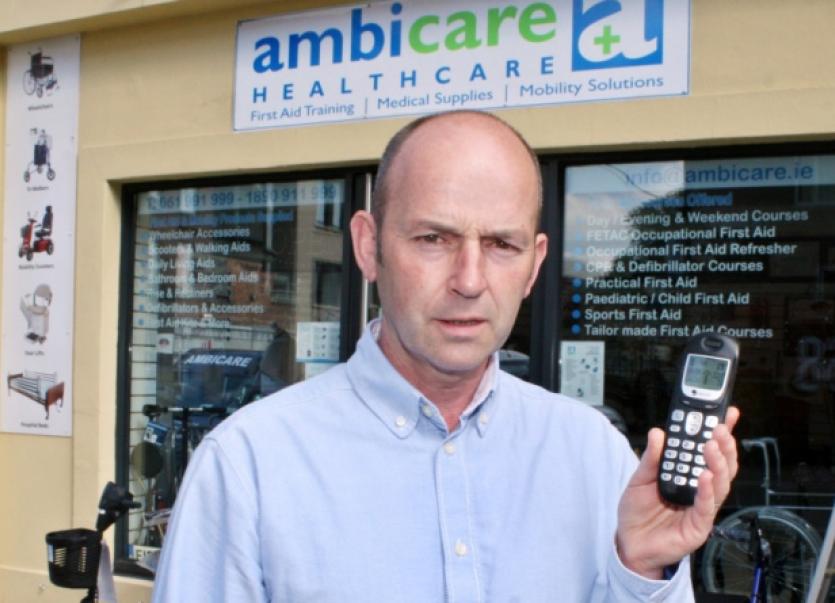 A LIMERICK businessman is to refer Eircom (Eir) to the Commission for Communications Regulation, Comreg) after many people were unable to call his shop for two years.

A LIMERICK businessman is to refer Eircom (Eir) to the Commission for Communications Regulation, Comreg) after many people were unable to call his shop for two years.

Daniel Corbett, who runs Ambicare on the corner of Henry Street and Lower Hartstonge Street, selling mobility products, is “beyond angry” with the telecommunications provider after learning when customers called his shop without using the 061 prefix, the line went dead.

The problem only came to light two weeks ago when there was an outage in the area, and an Eircom technician attempted to dial Daniel’s shop from the exchange in Roches Street.

In ten attempts, the engineer could not get through.

When Daniel opened two years ago, he paid an extra charge to Eircom (which was rebranded as Eir this week) in order to acquire the unique number - 991999.

But he says he was told by engineers that because most Limerick phone numbers start with either three, four, or five, any different format caused a problem when people dialled the number without 061 in front of it.

“The exchanges do not recognise a unique number with nine at the start,” he explained, “If we did not have this problem two weeks ago, we would have carried on in ignorance. We had the odd comment from people asking if we were still in business. We could not understand what was going on: we just thought the market was slow.”

Even when 061 was dialled with the telephone number, Daniel says customers could only “sporadically” get through.

The fact people have not been able to connect to his shop has had such an effect on trade, Daniel had decided that, had things not improved by Christmas, he would have closed the shop which also provides first aid training and certification.

“It is scary how close we came to closing the business. We just could not understand what we were doing wrong. I went to practically every chemist shop to give flyers. We made a point of giving flyers to every person who came into the shop. I went to meet all the occupational therapists at their meeting in Raheen, yet the business did not seem to move on,” Daniel told the Limerick Leader.

Although the problem has now been solved, Daniel he fears it could be too late to save his business.

This is because for much of the last two years, he has been the only shop in the city specialising in mobility products.

But now with other specialist shops, and his customers unable to ring his business, he feels they have been lost to rivals.

He said: “I don’t know how [Eir] can rectify the damage they have done. Any customers we have lost, they will not come back. We have lost them to competitors. Regardless of what publicity is given to us - even if Eircom puts ads in all the local papers, you are never going to get these customers back.”

Eir had not responded to a request for comment as the Limerick Leader went to press.