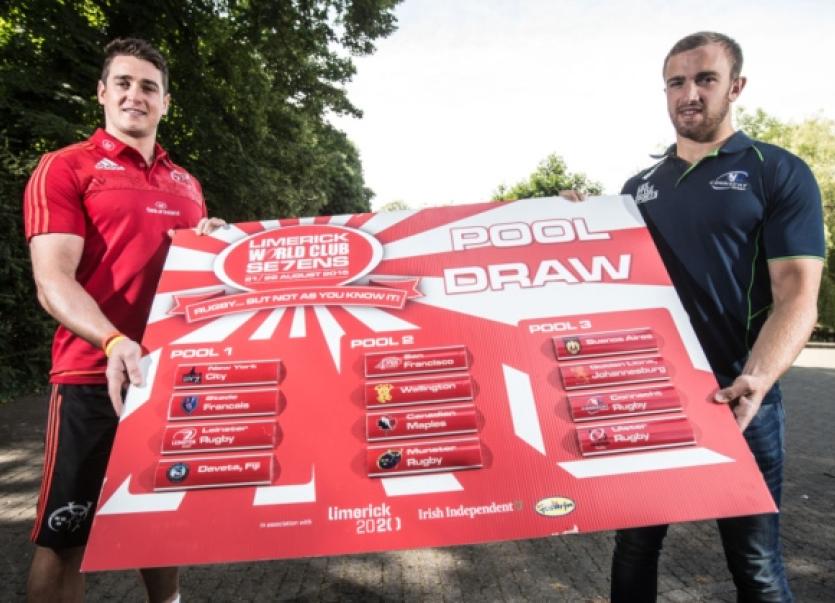 MUNSTER will take on sides from New Zealand, Canada and America in August at the Limerick World Club Se7ens, after today’s draw took place in Dublin.

MUNSTER will take on sides from New Zealand, Canada and America in August at the Limerick World Club Se7ens, after today’s draw took place in Dublin.

Anthony Foley’s side will go head-to-head with Wellington, Canadian Maples and San Francisco in Pool A, while Leinster have been drawn in a competitive Pool B alongside last year’s winners Daveta Fiji, Stade France and New York.

Connacht and Ulster will clash in Pool C and will also face off against Buenos Aries of Argentina and the Golden Lions of South Africa.

Limerick’s Thomond Park is once again the venue for this year’s competition on Friday August 21, and Saturday August 22.

This will be the first time that all four Irish provinces will play in an international 7s tournament.

Munster and Connacht will also lock horns on the Friday evening for a preseason 15 a side clash, where both sides will be fine tuning preparations for the season ahead.

Ronan O’Mahony, who excelled for Munster at last year’s World Club Se7ens is looking forward to the tournament.

“It was really enjoyable to play in the Limerick World Club Sevens last year, and obviously there are a lot of quality teams in it,” he said.

“We’ve got a tough group but we’re excited to be involved again and to get going. It’s fantastic that all the provinces are here this time around. It will only add to the atmosphere, and you get expect a bit of banter out on the pitch against the lads you know as well.”

The full draw is as follows: