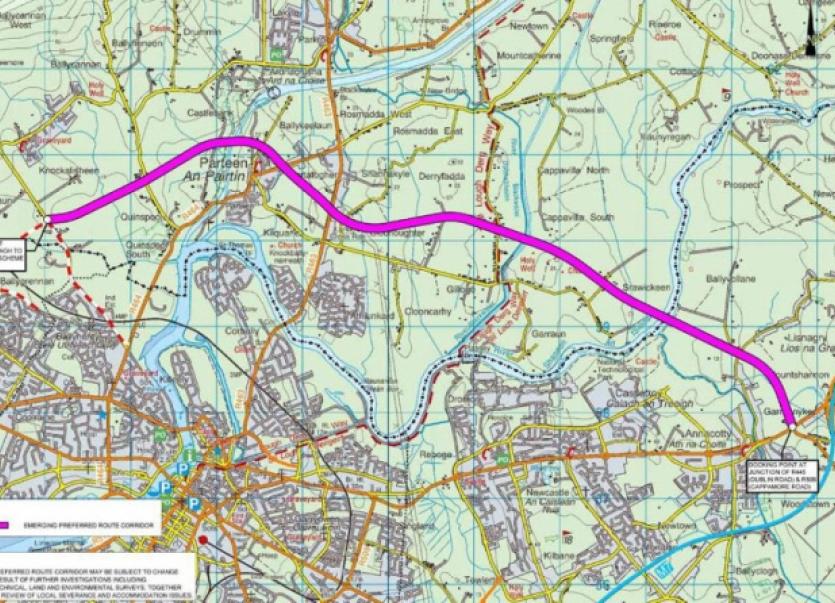 A CRUCIAL vote will take place next Monday on the proposed route line for phase 2 of the Limerick Northern Distributor Road.

A CRUCIAL vote will take place next Monday on the proposed route line for phase 2 of the Limerick Northern Distributor Road.

The road will link Knockalisheen, Meelick with the old N7 Limerick to Dublin road. However, the upcoming vote at a Clare County Council meeting would, if agreed - according to Cllr Cathal Crowe - cut Parteen village in half and most likely require the demolition of several homes, he said.

The Lisnagry-Annacotty Action Group has also been vehemently opposed to the proposed route from the outset and made a submission saying; “We do not accept your justification test for routing a road through a flood plain, claiming there is no other viable alternative.”

The route corridor for phase 2 extends from Knockalisheen, crosses the Shannon, Blackwater and Tailrace as it winds through Parteen and Clonlara before linking up with the old Dublin Road.

The action group says the road will cut straight through Mountshannon Road, Lisnagry. It will do untold damage to a small semi-rural community and reduce the viability of a number of farms, they say.

Councillor Cathal Crowe said that he used his speaking time in the Clare Council Chamber this week to show fellow councillors a Power Point presentation which he had prepared.

“I wanted to use a visual aid to convey to them the devastating impact that the proposed route line would have on Parteen village. The construction of a dual-carriageway would split the village in half. On one side of the dual-carriageway would lie the school, church, pub and several housing developments. On the other side would lie four housing estates and five local shops. The community would be torn apart,” he contended.

Clare councillors will vote on this route line at their meeting which is scheduled to take place at 3.45pm on Monday, July 13. If a majority are in support then the route line will be transposed into the Clare County Development Plans and the South Clare Plan. It could then progress through a design stage, environmental impact statement (planning process), land acquisition, tendering stage, ultimately leading to its construction a decade or so from now.

Cllr Crowe this week confirmed he will be opposing the route line. In 2011, a plethora of route options were being considered but, following an elimination process, these have been whittled down to a single “preferred route”.

The ESB insisted that no road should cross the Headrace canal as its embankments, which date back to the 1920s, may not be able to support a substantial new build.

“It seems to me that the big players - the ESB and Shannon Development, had a huge say in where the road should go but not a single inch of the route moved to accommodate residents and land-owners,” said Cllr Crowe.

Since 2012 Clare County Council has prepared a proposed variation to the Clare County Development Plan 2011-2017 and the South Clare Local Area Plan 2012-2018, to incorporate both the proposed safeguard and an access to UL from County Clare.

A similar process is occurring simultaneously with Limerick City and County Council.

Following the decision by the members of Clare and Limerick County Councils on the inclusion of the route into the development plan, preliminary design of the proposed Limerick Northern Distributor Road will commence together with the preparation of an environmental impact statement.