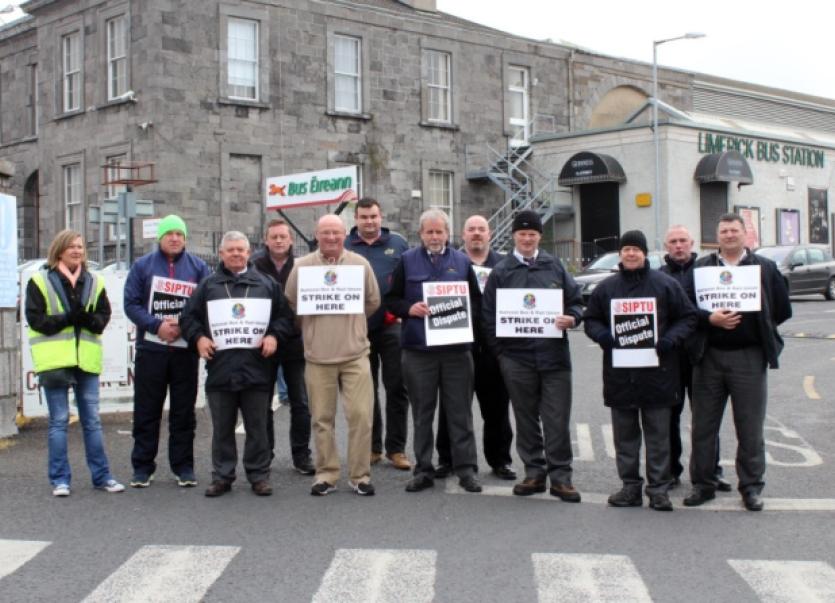 THOUSANDS of people across Limerick are facing travel disruption today as a strike action by bus drivers takes place.

THOUSANDS of people across Limerick are facing travel disruption today as a strike action by bus drivers takes place.

Pickets were set up at Colbert Station, as well as Bus Eireann’s garage at the Roxboro Road as staff strike over government plans to put 10% of bus routes out to private tender.

No Bus Eireann services are operating in Limerick, with the National Bus and Rail Union (NBRU) taking action today, with Siptu’s strike set to continue until tomorrow.

Around 139 bus drivers in Limerick are taking part in the action.

Eurobus is putting on extra services from William Street to help stranded passengers to Castletroy and Annacotty while JJ Kavanagh, Citylink and Dublin Coach is adding extra capacity on existing services from Arthur’s Quay and Henry Street.

Mr O’Donoghue, who is chairman of Siptu’s national negotiating committee warned that if some local routes in Limerick are privatised, it could lead to a rise in fares for passengers.

“If some routes are privatised, will they take free travel passes, what will the fares be like? We could be doing the public a favour,” he argued.

Fergus Harrold, the chairman of the Limerick branch of the NBRU added privatisation could represent a risk to people in deprived areas.

“A private operator is not going to be sending in a regular bus to Moyross as they are not profit making. What happens to people in Moyross? Are they going to have to pay for their own bus,” he asked.

Bus Eireann has said it will initiate High Court proceedings against the unions over the strike action.

“This dispute is illegal and is totally without justification. The unions were today presented with ample opportunity to address all of the issues within an agreed process at the LRC. They chose not to engage in a meaningful way and decided to walk out, without giving management an opportunity to address their concerns. The management of both companies are now obliged to pursue this line of action to protect the future interests of the business, which sustains thousands of employees,” a spokesperson for the company said.