A pub of your own is ‘just a breath away’ 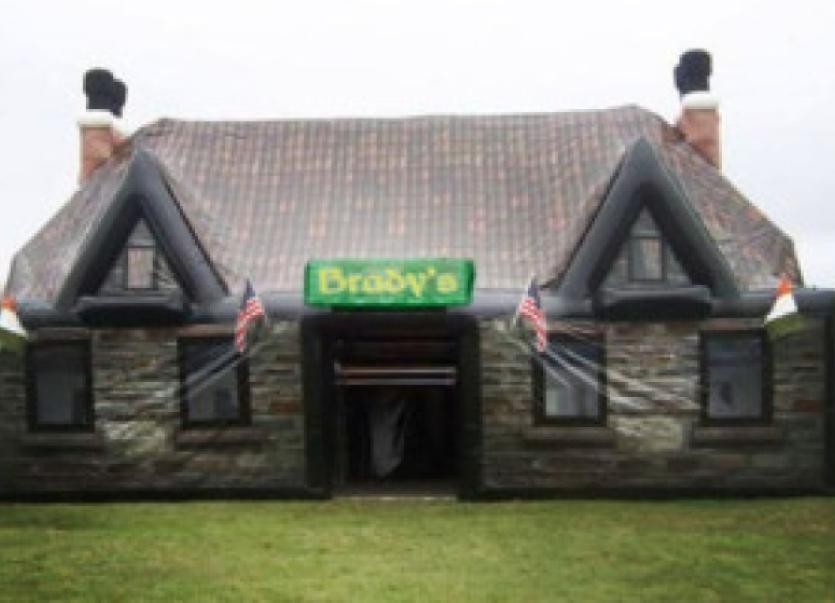 HAVING your own pub in your own back-yard is now possible without breaking the bank, according to Abbeyfeale-born businesswoman Lisa McMahon.

HAVING your own pub in your own back-yard is now possible without breaking the bank, according to Abbeyfeale-born businesswoman Lisa McMahon.

Lisa, who now lives near Newry in Co Down with her husband and family, set up her own company Partyhire and Events just two years, when she bought and began hiring out the country’s first MAC style inflatable pub.

And very quickly she discovered she had a hit on her hands. “The demand was crazy. It got so popular I got a second one,” she told the Limerick Leader this week.

Now Lisa plans to give Limerick punters (or should that be pinters) a chance to road-test the inflatable pub for themselves when she sets it up in her home town this July for The Gathering.

And since she first took the inflatable route, Lisa has added to her portfolio: she now offers customised, inflatable pubs for sale. These can come in all shapes and sizes, she said and have been a big hit in the US, Russian and the United Arab Emirates in particular.

“People can personalise them by putting their name over the door, or by having their favourite photos on the walls or their family crest over the fireplace,” Lisa explained. Club, county or country flags can also be customised for the exterior.

Demand for the pubs has come from pubs themselves wanting to have an overflow space or from clubs or organisations involved in big, sporting events. There are also those who just want to see their name over the door - and can afford to make the dream a reality.

The inflatable pub is covered but has no internal floor, Lisa explained.

But since the success of her first “pub”, Lisa has extended her range and now has an inflatable cinema screen for sale or for hire, along with a candyfloss machine and a popcorn machine.

The cinema screen is particularly popular for fund-raising events and for children’s events, she said, pointing out that she does all the administrative work involved in securing a one-off film licence.

Recently, Lisa’s off-beat business ideas have been racheting up a lot of online attention. Her website is now getting over 2,500 hits a day, she said, while the more traditional media, as far away as Berlin and Sydney are also intrigued by her products .

Go to www.partyhireandevents.com for more details.