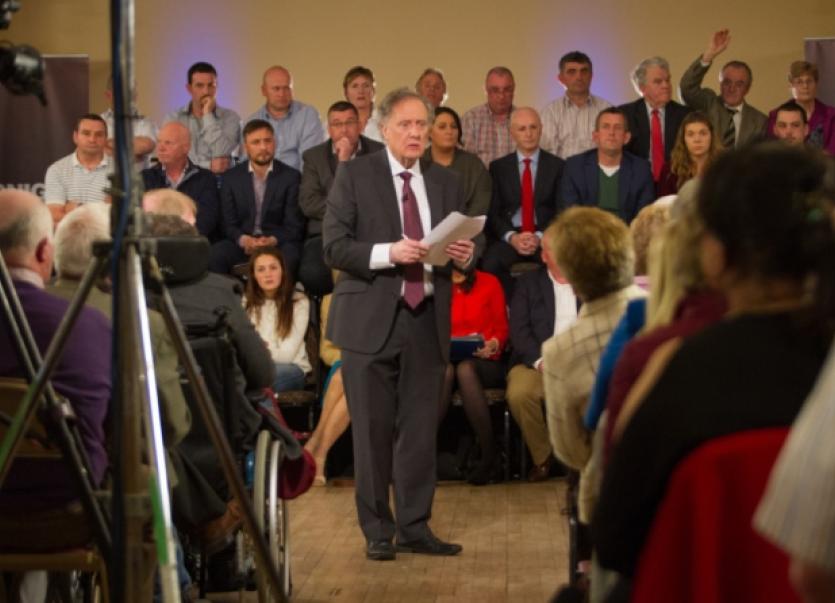 IT was like walking into a big parish social, where you knew everybody by name and place. And you knew too how and what they would do or say.

IT was like walking into a big parish social, where you knew everybody by name and place. And you knew too how and what they would do or say.

A cynic might have suggested it was more a case of rounding up the usual suspects but there was no real appetite for cynicism among the crowd. Rather there was a childlike delight in being there and the seated gloated in having snagged a chair while others were banished to the “overflow area”.

Abide by the rules, said Vincent Browne, the epitome of an avuncular schoolmaster. Don’t shout anybody down. “Can we all agree on that?” And a show of hands confirmed we were all ready to agree to whatever it took to get the show on the road.

“State your name and affiliation, even if you are a member of Fianna Fail,” he continued to roars of approval from the crowd.

But his attempt to ensure discipline was undermined as a woman darted from the back, intent on snogging Vincent. And as the debate got underway, the rules didn’t hold, with Vincent himself the biggest culprit when he came to shouting people down.

His game plan, he had told the Limerick Leader in advance, was to hold to account the constituency’s three TDs. And he led them in with easy opening statements. Dan Neville, as the senior Fine Gael TD, went first. Things are now changing, he said and reducing taxes and reversing some of the cuts were on the cards. Ireland was a different place when he was elected in 2011, his party colleague, Patrick O’Donovan declared but he warned that the present recovery was fragile and political instability was a threat to that recovery.

“We have a two-tier recovery going on at the moment,” Fianna Fail’s Niall Collins declared. Fairness and ability to pay are not recognised by the present Government, he charged.

But Vincent, determined to have no truck with suggestions from either party that the past was now a different country, went in fighting, challenging. However, it was all seemed a bit too short and scatter-gun and when the audience got in on the act, the debate became ever more random, rushing headlong from one topic to another.

There were moving and impassioned contributions on suicide and on suicide among Travellers but the debate on the upcoming referendum on marriage equality never ignited. The temperature rose a bit when Browne announced that each of the sitting TDs had accrued over €500,000 each in expenses over the past four years. He threw the ball at Niall Collins first, which seemed to stir up a kind of glee among the Fine Gael supporters in the room. But when it emerged that the Fine Gael TDs had clocked up even higher totals, a kind of dread took hold. And the past, with all its venalities, came tumbling into the present.

“Ye have treated the women of this country as second-class citizens,” declared one woman, an Anti Austerity Alliance supporter. Why, she demanded to great cheers, had they cut allowances for lone parents? “I now have to work longer hours and see less of my children. “

“Is that fair?” Vincent demanded repeatedly of the Fine Gael TDs. But he got no straight answer.

We sailed on through crime, the hen harrier, the promissory notes, the destruction of rural communities, changes in the Rural Development programme, Nama, the IRBC, community employment schemes, Lyme disease, the reduction in age for presidential candidates, sewerage problems, water charges, pluralism, the hospice at St Ita’s that is now no more and help for early school leavers. At times, it seemed that the programme was fast becoming a Hyde Park Corner with a soapbox for every issue. And sure enough, about 90 minutes into the debate, the energy levels had sagged; people in the audience were beginning to discuss among themselves and the one-minute rule had long disappeared. Even Vincent at times seemed to lack the energy to stop contributions that meandered.

Afterwards, some of the politicians were unhappy, particularly Sinn Fein. Their leader, Cllr Maurice Quinlivan, they said, had the microphone in his hand on two occasions but never got called. Others felt there had been no real debate.

Had Vincent held power to account? Had the people spoken? And had anybody listened?

There were, I suspect, few, if any, who were persuaded by the arguments put forward. And, a great many people probably left with the same notions they came in with.

But for all that, beneath the mad scramble for air-time and attempts to score points, could be seen all the worries of a people seldom consulted, all the miseries of policies gone wrong or wrong from the beginning, all the marks of a society that isn’t measuring up. And that was worth the effort.

Besides, if the faces were anything to go by, the majority of people went home well pleased with their experience. And they had the programme itself to look forward to on Wednesday night.

For more pictures see page 21 of the Leader2 section