Stained glass from Limerick church for sale for €10,000 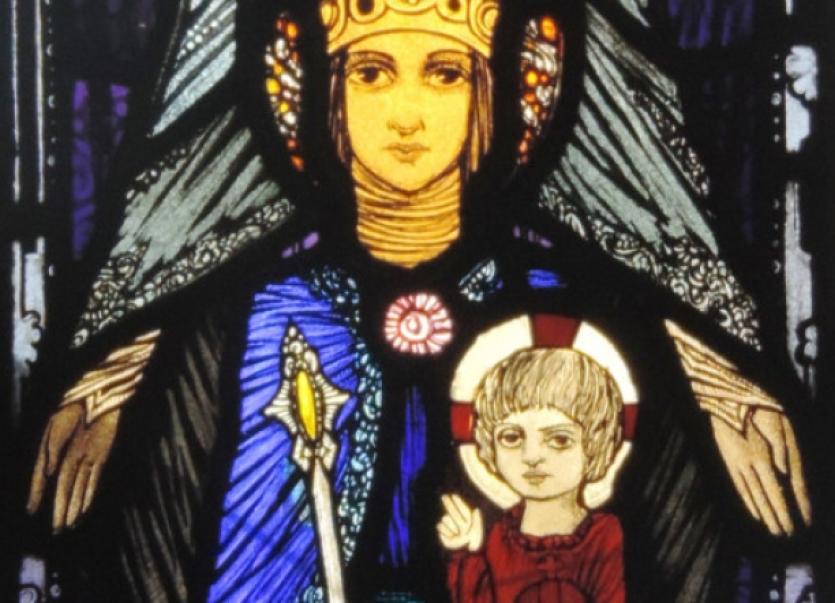 A RARE piece of stained glass by the prestigious Harry Clarke studios will go up for auction in Kilkenny next week, and is expected to fetch as much as €10,000.

A RARE piece of stained glass by the prestigious Harry Clarke studios will go up for auction in Kilkenny next week, and is expected to fetch as much as €10,000.

The glass panel, entitled “Jesus, Mary and Saint Anne”, previously hung in Kildimo church in county Limerick for decades - and was commissioned for just £20 some 88 years ago. It is understood that a local priest gifted the item to the architect who designed the church circa 1950s-60s, and it is now being sold by a member of his family.

The item was commissioned some 20 years prior to that, and auctioneer George Fonsie Mealy said while they can’t be sure it was entirely the work of Harry Clarke, “he certainly had a hand in it at some stage during his lifetime.” “It’s a wonderful piece of work, and we’re very honoured to be given the task of finding it a new home under the hammer,” he said.

The piece measures approximately 102cms x 35cms, is signed Clarke, Dublin, and it comes with an original bronze casing frame, and in a later swivel oak stand.

“The piece is recorded in the Harry Clarke papers in Trinity College Dublin,” Mr Mealy told the Limerick Leader.

“It was commissioned in December 1926, at a cost of £20, four years prior to the death of Harry Clarke. It’s a beautiful piece, a really wonderful work of art. It has a lot of interest for its artistic merit, its significance and its quality, hopefully it’ll find a very good home, especially with its delicate nature and that its future integrity will be kept in good stead. It would fit into any home. The colour in this particular piece is very vibrant and exciting. When you study it you see the quality and the workmanship that was synonymous with the Clarke studios.”

Harry Clarke, born in 1889, is regarded as one of Ireland’s greatest stained glass artist. During his short life (he died aged 42) he created over 160 stained glass windows for religious and commercial commissions throughout Ireland and England, and as far a field as the USA and Australia.

Also up for auction is a rare, Limerick silver two handled cup, by Joseph Johns, c. 1770, with attractive heavy embossed decoration of flowers, wheat sheaves, scrolls and windmills. It is priced from €4,500 to €6,500. “Limerick silver is very sought after, and this would be wonderful for anyone’s collection.”